The supercar world is littered with the corpses of wannabe sports car manufacturers which shouldn't have started in the first place. If ever there was a supercar that was deserving of success and should have stood proudly with the likes of Porsche, Ferrari and Lamborghini, it was the Cizeta V16T.

This true exotic was the Pagani Zonda of its time, with outrageous styling and a just as outrageous mechanical specification - it completely stood out from the crowd.

The fact that it ultimately failed wasn't due to any shortcomings of the car or of the people who built it and just goes to show how unpredictable the car industry can be.

For some background, the Cizeta V16T came into being as a result of Italian culture clashing with American business. It was the late 80's and the venerable Lamborghini Countach was due for replacement, having been in production for over 16 years. Marcello Gandini was contracted to do the design for the new Lambo. Already famous for penning both the Muira and the Countach. Gandini wanted to pull out all the stops and come up with something as sensational as his previous works but also stamp it as being completely new and contemporary.

The resulting design certainly had wow factor and couldn't be mistaken for anything else but an Italian exotic. Unfortunately the design was rejected by Chrysler, who owned Lamborghini at the time. As the biggest market was America, the Chrysler execs thought Gandini's proposal was too outlandish for the generally conservative Americans. Chrysler significantly reworked the design using a team based in Detroit and the end result was what we now know as the Lamborghini Diablo.

This did not sit well with Gandini. Incensed, he decided to take his original design to Claudio Zampolli. Zampolli was a high profile exotic car dealer who started out as an engineer and test driver for Lamborghini. With Gandini they rounded up ex Lamborghini employees to build and develop what would become the Cizeta V16T.

On paper the Cizeta V16T was a recipe for success. The people who would build the car were well known in the industry and technically the car introduced many firsts. They were even to be located in the worlds supercar capital in Modena, Italy. Having the right ingredients means nothing if you don't have the resources to bring it all together.

They needed financing to build the all-important prototype and this is where it became a case of, 'It could only happen in Italy'. The prototype was entirely funded by Giorgio Moroder, the famous Italian singer, songwriter and record producer. You may remember he did the sound tracks for classics like Flashdance and Electric Dreams - For every car sold you received a copy of flashdance soundtrack, HAH! How these two came together became a great story itself. In return for financing Cizeta Automobili, Moroder was granted a 50% share in the company. 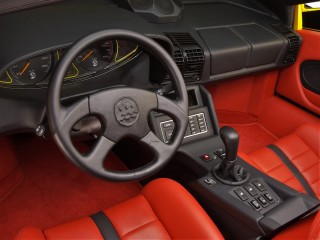 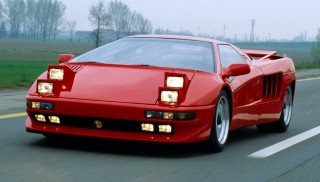 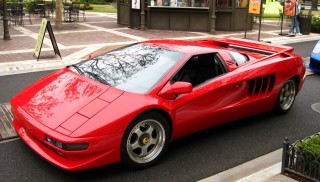 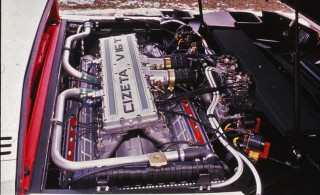 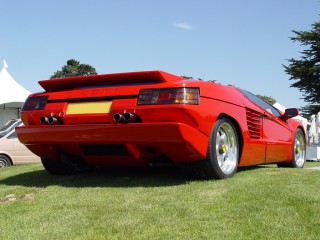 The Cizeta V16T debuted to critical acclaim in December 1989, everybody was clamouring to see the world's first transversely mounted V16 supercar. At the Geneva Auto Expo, Zampolli took deposits for 14 confirmed orders. At a $100,000 USD each it was quite a cash injection for the newly formed company.

Things were looking good for Cizeta Automobili, they had firm orders, they had financial stability in their backing from Moroder and they had the right people to bring it together. So what went wrong?

Basically the car business and the music business make bad bedfellows, everything was peachy keen between Zampolli and Moroder up to the point where Zampolli informed Moroder it would take up to two years before the first Cizeta's would be ready for the road. This was Zampolli's ultimate dream being fulfilled, he didn't want anything with his name stamped on it done in half measure. The Cizeta V16T was going to be an exclusive, entirely hand crafted automobile, using state of the art materials, totally bespoke and in-house, nothing less would do.

Moroder wanted a quicker return on his investment and unbeknown to Zampolli, he began investigating ways to produce the Cizeta cheaper and faster. There was talk that he approached a German manufacturer with the aim of having the body manufactured out of Fibreglass and using a BMW drivetrain.

Zampolli would have none of it, as he had sold his clients a thoroughbred and Moroder was trying to give them a half-breed. This was the beginning of the end for the Cizeta. Moroder pulled out and whilst Zampolli managed to retain 100% ownership of the company, he no longer had the financial security which Moroder provided. Despite this, Zampolli tried to carry on, undaunted, his hope was that finishing one car would finance the next.

For a time this strategy worked and Zampolli was able to deliver 9 Cizeta's to clients of the original 14 ordered. Reading between the lines it seems that as much as the Cizeta V16T had going for it, the Italian supercar power players at the time perhaps did not want this new upstart to gain traction. Parts suppliers and machinists of the region closed ranks and refused to do business with Cizeta, citing that it was affecting business for their core clientele, (Ferrari and Lamborghini we assume).

The V16 engine block for example, was being machined at the same establishment Ferrari was using. With 5 cars still remaining to be built, the machine shop insisted he pay for and receive all engine blocks at once, it was all or nothing. Ultimately this was the straw which broke the camel's back, with the bank putting a stranglehold on his line of credit, there was no way Zampolli could purchase all the engine blocks. As it was, he begged the supplier to machine one more block for an almost finished car and they reluctantly agreed, ensuring the work was only done after hours or weekends, if a Ferrari rep happened to come around, then there'd be no incriminating evidence. 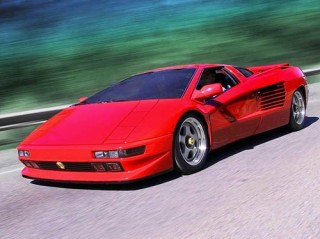 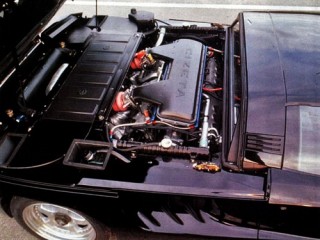 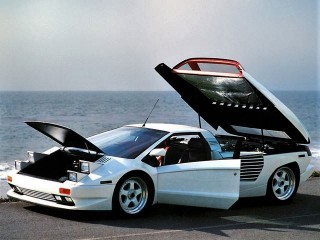 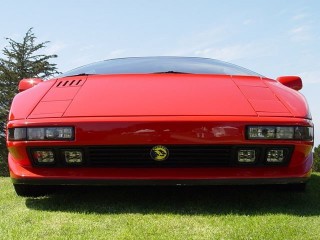 That was the last officially built Cizeta to leave the factory. To add to his woes, the Italian IRS were investigating his business practices as an anonymous tip-off suggested that money was being laundered through the company. Though no evidence of wrong doing was ever found, Cizeta Automobili was heavily fined. Cizeta Automobili officially filed for bankruptcy in September 1994. Zampolli salvaged what he could of his files and equipment and had it all crated and shipped to California.

Even after all the ensuing drama, Zampolli could not let go of his dream and in 2006 began a limited production run for select clients whose money was no object and their desire to own what is arguably one of the world's most exclusive supercars, was a must. A further 10 Cizeta's were since been built and Zampolli will happily to take your order providing you pay up front. At around $650,000 USD a piece, it may be a little rich for some.

As for the Cizeta V16T itself, if you have any doubts as to the vehicles supercar credentials, you only need look at its specifications to understand why it's truly special. Featuring the only transversely mounted V16 engine fitted to a car, the mid-mounted 6.0litre produced 560hp (418kW) @ 8000rpm, 398 ft lbs (540Nm) torque @ 6000rpm, it could sprint from rest to 60mph (100km/h) in just 4.0 seconds and on to a top speed of 210mph (338km/h). Remembering that the best from the supercar competition at the time could do was 201mph from a Ferrari F40 - that's impressive indeed. The car was intended as a supercar killer and even the wolf logo was a cheeky dig at Ferrari and Lamborghini.

The Cizeta's styling is polarising and it seems you'll either love it or hate it, I'm in the former camp. What else would you expect from the man who styled the Countach. There is no denying it's over the top, from its quad pop up headlights to its almost comically broad haunches which accommodate what has to be one of the widest engines ever. It's embellished with gaping vents and slots, and the rear spoiler could see service as a bath tub. It all comes together to suggest ludicrous speed and as it turned out, it's not just a show pony. It's a real shame that fate was aligned against Zampolli and we can only dream about what could have been, I think there's always room for one more supercar. 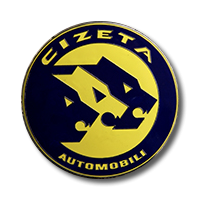 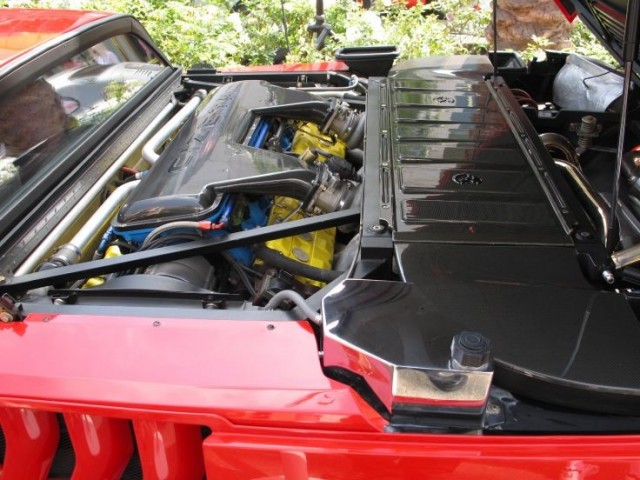 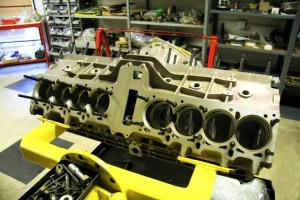 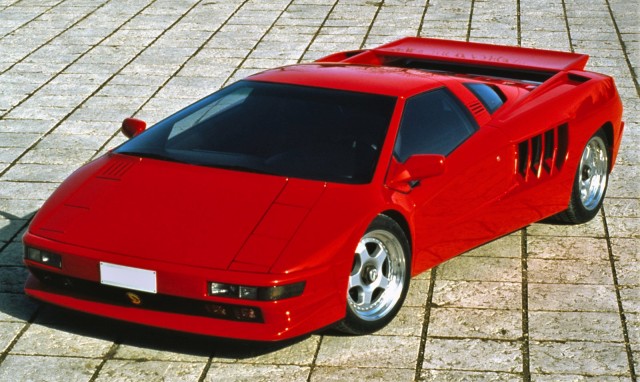