Surreal, it's the only way I can describe the experience. Here I am riding along in the most expensive car I've sat in, and that's how it felt, surreal. To put it into perspective in OZ dollars if I sold my suburban Adelaide house to buy a Ferrari 250 GTE, I could maybe own a third of the car. UGH!

Besides ending up divorced if I mentioned the idea, I'd have to say if only a third of the GTE was on offer, it would have to be the front wings and what it contains, a glorious 3 litre Colombo V12 engine. Truly a work of art. 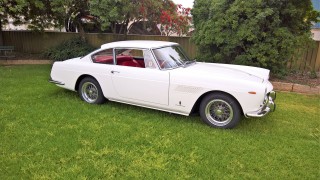 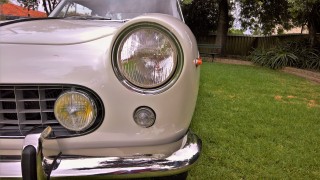 First a little history. The early sixties were a time of significant change for Ferrari, from a boutique builder constructing small numbers of custom-built sports cars to a fully qualified car manufacturer. The 250 GTE was one of the first Ferrari's to enter into series production, with what is believed to be 1000 units having left the factory during its three-year run. It was also important in that it was Ferrari's first "family car;" being a 2+2, it could comfortably seat two adults and two children.
Bodied by Pininfarina, the 250 GTE was essentially a 250 GT coupe, moving the 3.0-litre V12 engine 20 forward allowed it to gain enough cabin space to accommodate the additional seating. While the extra seats could have compromised the look of the car, with usual Pininfarina flair, the designers managed to attain a style that is both sporting and classy in its appeal. With a sweeping roofline and large glass house, it looks as good today as it did when released some fifty-seven years ago. With fully Connolly leather interior, an instrument cluster with chrome bezels, the 250 GTE was a high-class tourer with luxury pedigree.
Its classic Colombo designed V12 was good for 240bhp, with a 0 to 100km/h sprint taking less than 8 seconds, it was quite the machine for its time. It's relatively lithe kerb weight of 1280kg accounted for its high performance, giving it a good power to weight ratio.
While all that sounds academic, what does that mean in real terms? What's it really like to drive, and why do early Ferrari's go for silly money?
By today's standards, a hot hatch will give it curry regarding straight line performance, but that doesn't paint an accurate picture of the cars outright ability, nor it's ability to seduce the driver, and boy does this car pull at the heartstrings. I challenge any petrol head not to fall in love with the 250 GTE once they've experienced it. 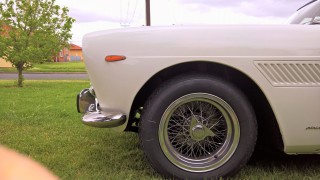 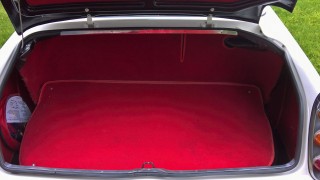 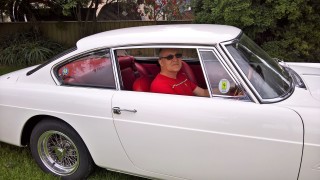 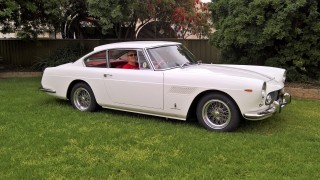 up the styling, you've heard it a thousand times before and it sounds cliche, but it doesn't make it any less true. Pictures don't do the car justice, the simplicity of its lines, the balance of its proportions, all the more compelling when you consider how well it's packaged. Face on the gaping mouth with the egg-crate grille evokes images of racing Ferrari's, it oozes cool. The interior is like tactile art, fully appointed luxury and when you think this was released the same year as the FB Holden, which seems like it belongs on the Flintstones in comparison. The one interior appointment that indeed suggests its age are the front seats, they look woefully underdone, the backrest seems too low and the cushioning, unsupportive, but quite the contrary, I'd place them in the top three most comfortable car seats I've sat in.

Everything about journeying in the 250 GTE is an occasion and involves theatre, sitting in the car warps you to a time of suave movie stars and cruising the Riviera south of France.

Take the start-up sequence; you can't just turn the key and away you go, no you have to prime the fuel system. You do this by twisting the ignition to the right; after that, a loud mechanical ticking/whirring enters the cabin and only after it stops can you start the engine by pushing the key. The resultant cacophony, once the V12 catches life is nothing short of breathtaking. You immediately question, all this noise and only three litres?

The next thing that confounds is the view out, today's manufacturers should take note, there's not a single blind spot from inside the cabin, vision everywhere is panoramic, the A and B pillars unbelievably thin, no side mirrors are required. The front wings of the car are entirely visible from the driver's seat, making placing the car a delight, the confidence it inspires is immediate.

The next thing that bamboozles, is the refinement. We begin our journey in the heart of the Adelaide suburbs in stop-start traffic; I'm expecting a recalcitrant beast, shouting Italian obscenities with its every motion. Instead, I'm treated to a car that is no more temperamental than a Ford Focus, never mind the clutch is a little heavy, it's more than acceptable. It's also quiet, even at our national speed limit of 110km/h, it's eerily devoid of the noise you might expect, there's just a hint of wind rustle around the A-pillar.

Now here's the thing, what about engine response, you're saying, it's 57 years old, surely it's nothing special. Seat of the pants driving tells another story, I think this thing would eat a Focus ST for breakfast. A lot of that could be down to the noise, and the feel of the torque kicking in when it's on song. The free-revving V12 has no trouble singing up to 7000rpm and what a sound it is. Ride compliance is also a standout; its ability to cope with our poor Australian road surfaces is superior to current GT tourers. The wire wheels, which are 15" Borrani's with Pirelli Cinturato high sidewall tyres no doubt help.

The 250 GTE was also one of the first series production Ferrari's fitted with all-wheels disc brakes by Girling, so it stops as well as it goes. 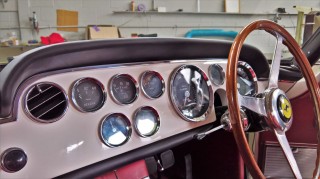 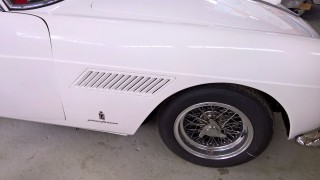 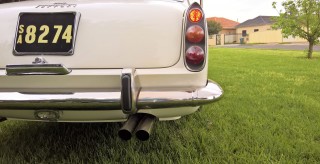 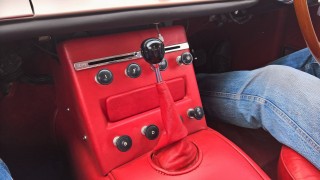 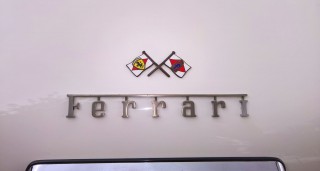 The other cool feature I really loved about this particular Ferrari was its four-speed transmission with electric overdrive. It electrically actuates an additional set of cogs to reduce engine speed when it's in top gear, controlled by a side lever on the steering column. There's something visceral about engaging it, and it works very efficiently.
Despite the cars live rear axle, it's handling also in no way felt compromised, with the twisties we experienced on the open road handled with aplomb. Apart from the fact of its obscene value, you could use the 250 GTE as a daily driver, if only.
So what's my take away from driving in old classic Ferrari, is it all that it's cracked up to be? In a word, yes, and if I had the silly money to buy one, it'd be a done deal.
Many thanks to Vern Schuppan and the boys at Marque Restorations for inviting us to experience the Ferrari 250 GTE.

Delivered new by official Ferrari agents W.H. Lowe & Co of Box Hill, Victoria to Dr T.A. Maxwell who owned the car for a brief period before selling it to Mr Oliver Young of Adelaide.

Then purchased by Adelaide scientest Dr Garth Morgan. The car remained in his ownership for 35 years.

This 1962 Ferrari 250 GTE still has its original seats, door trims and carpets.