You might be wondering what it's like to drive a Classic Supercar. For most car enthusiasts it's the ultimate dream. Take the black Lamborghini Countach poster with the scantily clad model draped over it, the one all teenage boys had hanging up on their wall, including me. The only problem I had with the poster is the woman draped over the car interfered with the view of the Lambo!

For most of us getting a ride in the Countach would be a fantasy fulfilled. I can't speak for the experience of riding in a Countach; apparently, far removed from the reality of actually driving one. Rough, agricultural, weak brakes, a clutch only a powerlifter could operate and bone-shattering ride or so I've read. Some dreams are better just left alone.

Who am I kidding, who would say no to a Countach? Who cares about reality, it's a Countach, just do it I say, you may rupture your spleen, but you'll be too busy laughing your arse off to care. 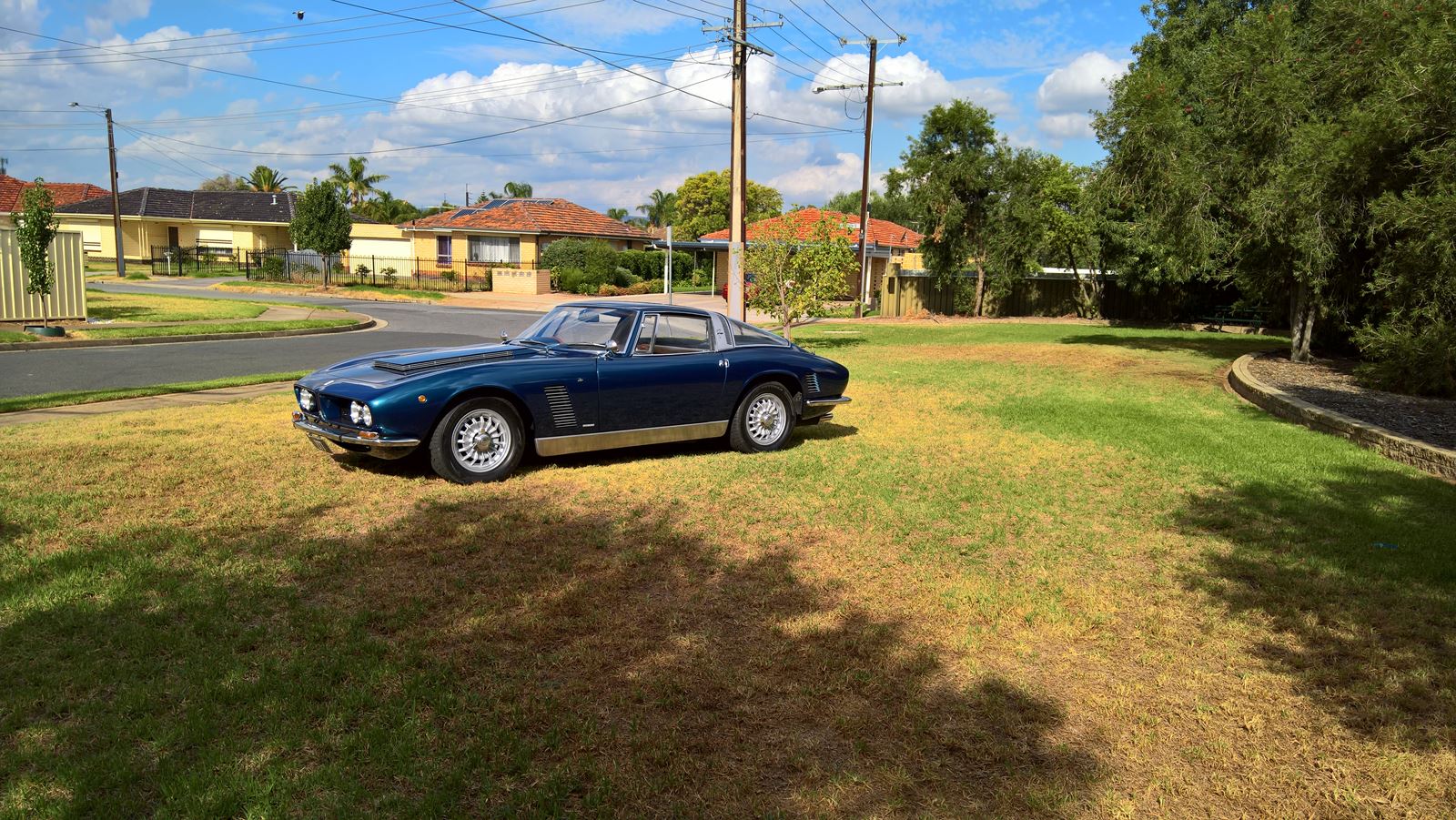 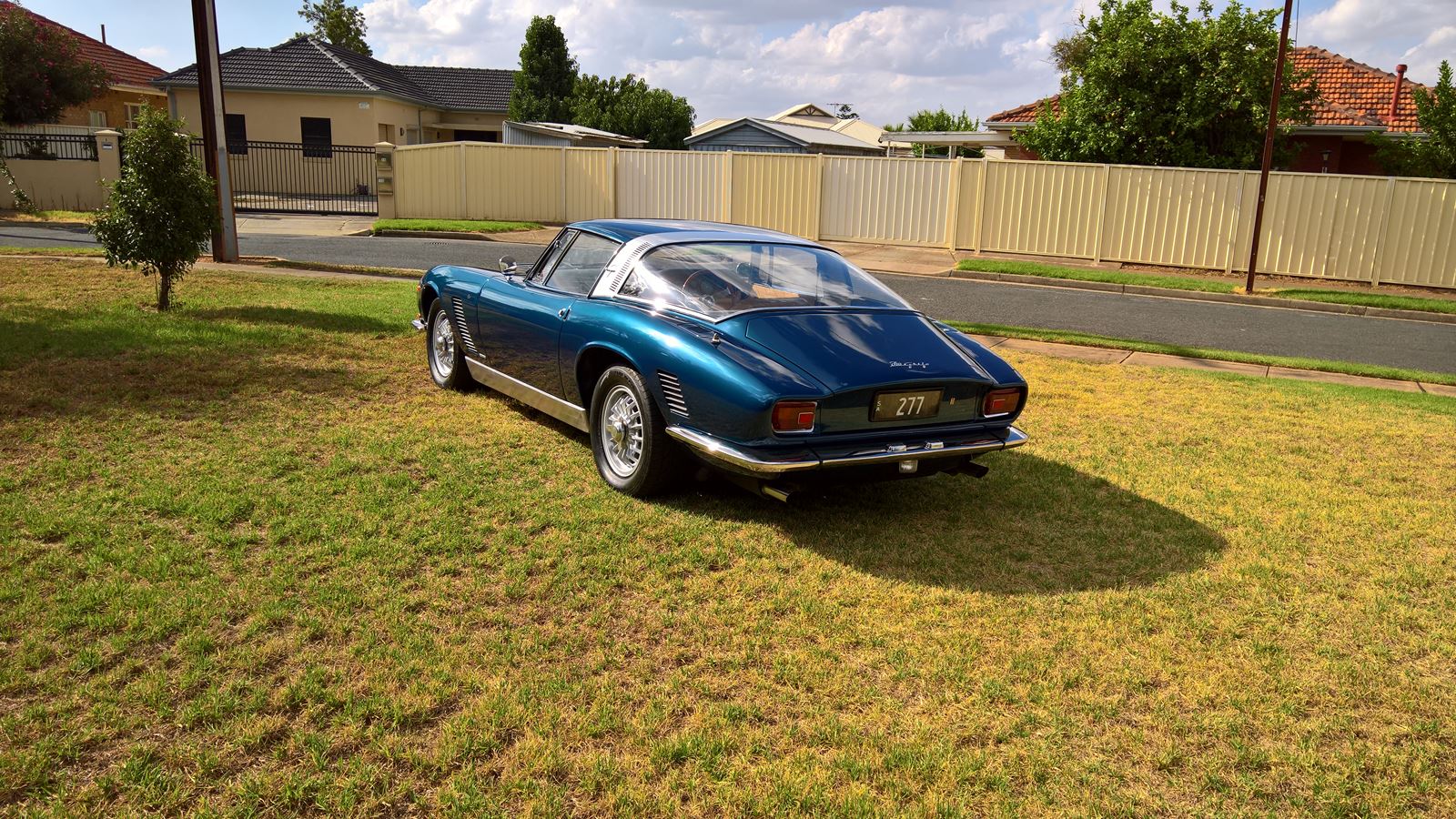 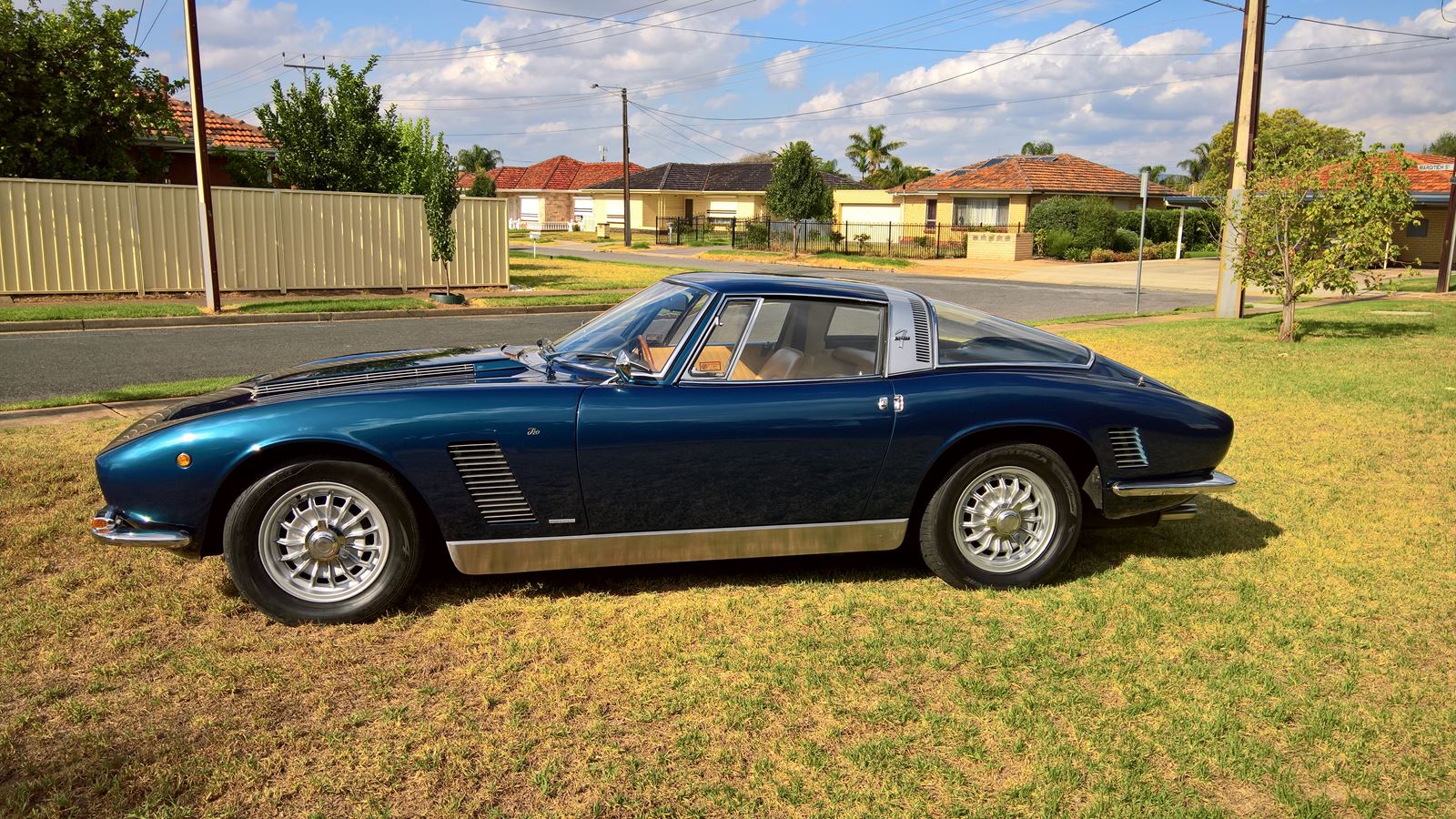 So through a set of happy circumstances, I got to fulfil a Supercar classic dream of my own. I got to ride in a 1970 Iso Grifo. I never thought I'd see one in the metal, let alone go for an extended ride in one. If you're mad on Italian exotics, you'll know the Iso Grifo is the brainchild of Giorgetto Giugiaro and Giotto Bizzarrini.

Bizzarrini is credited as the man responsible for possibly the most famous car of them all the Ferrari 250 GTO. Ferrari was known as an 'agitator of men', he was famous for it, causing turmoil to get the best out of his workers. It seems Ferrari 'agitated' Bizzarrini once too often, and he left the firm acrimoniously while the GTO was still being developed in 1962.

Bizzarrini decided he could do it on his own. Hence the Iso Grifo was born in the mid-sixties. A lot of what made the Ferrari 250 GTO great went into the Iso Grifo; basically it was a GTO turned up to eleven but civilised for road use.

To put into perspective how rare the Iso Grifo is, a total of 413 built only between 1965 to 1974. There were two main series, but they all had an American drivetrain in common.

The 1970 model I was fortunate enough to ride in was a late Series I 'Penthouse' fitted with a Chevrolet 7.0-litre (427CI) V8 big block motor. The Penthouse refers to the large square bonnet scoop required to clear the massive engine. The scoop would look outlandish anywhere else, but on the Iso Grifo, it looks just right.

The thing that strikes you when you first look at the car is how big it is; we're talking Mustang Mach I size. It's an imposing-looking machine. The next thing you notice is its unquestionably Italian clothing; its sleek lines just ooze sex appeal. Being a Series I Iso Grifo, the headlights are exposed rather than the pop-ups of the Series II, and I believe it proves the cleaner styling of the two.

As you cast your eyes around the car, its purity becomes evident; there isn't a line out of place, there's no frippery and you know it's all about speed. The expansive glasshouse of the front windscreen and wraparound rear window not only make for a dramatic effect, but it's also very practical.

When you open the door, you're greeted by fully leather-trimmed luxury, and its interior is reminiscent of a high-end Jag of the same period, including the superb timber fascia for the dash. When I say leather clad, it surrounds the transmission tunnel, the door cards and top of the dash. The dash trim in matte black also doesn't cause reflection in the steeply raked windscreen, apparently an issue for other Supercars such as the Miura.

The seats look tiny and have no headrests; you expect them to be uncomfortable and not provide good support, but looks are deceiving, they prove to be as good as anything else this sporting I've sat in. The view to the outside world is fantastic and comparable to a new car if not better; the slim B-pillar means there are no blind spots present, it feels a lot easier to place than a Mustang Mach I I recently drove in.

There is, of course, a beautifully handcrafted wood trimmed three-spoke steering wheel and the gauges are by Veglia, there's also a grab handle above the glove box for the passenger, it's not there just for show.

This particular Iso Grifo has been tweaked, while the 7.0-litre Chevy big block conservatively quoted a 435bhp power output, our ride has been tuned to a whopping 560bhp. 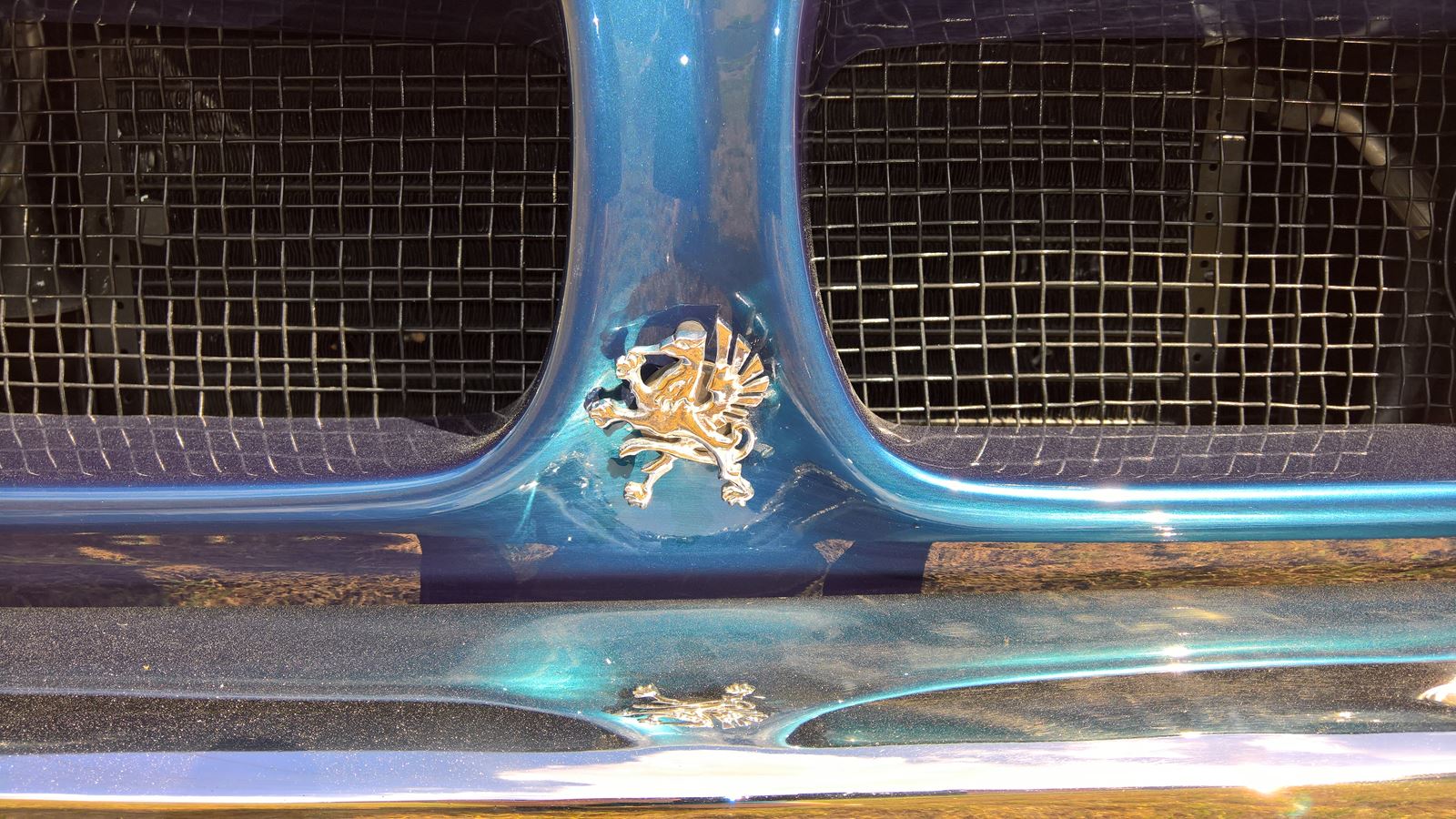 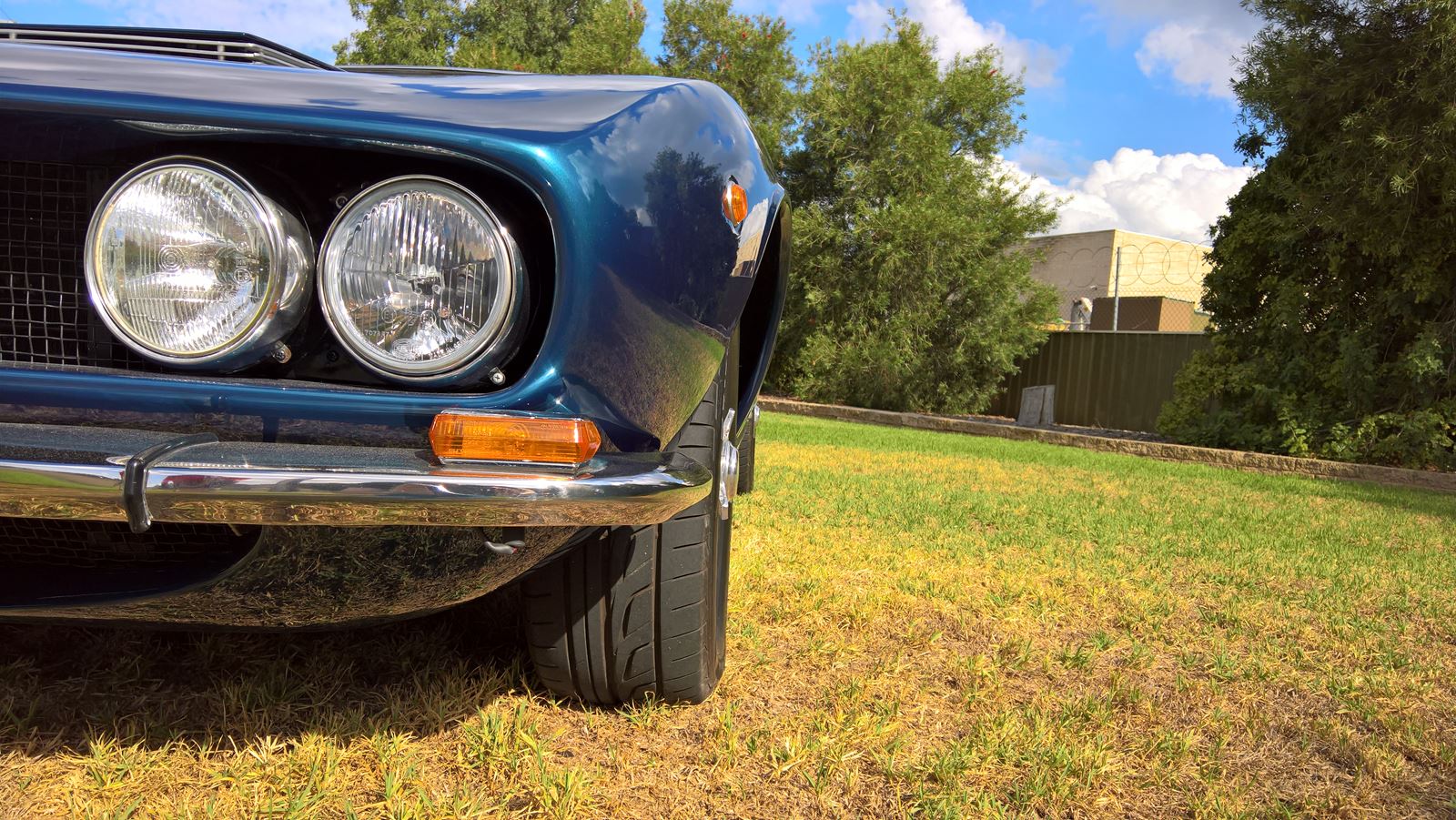 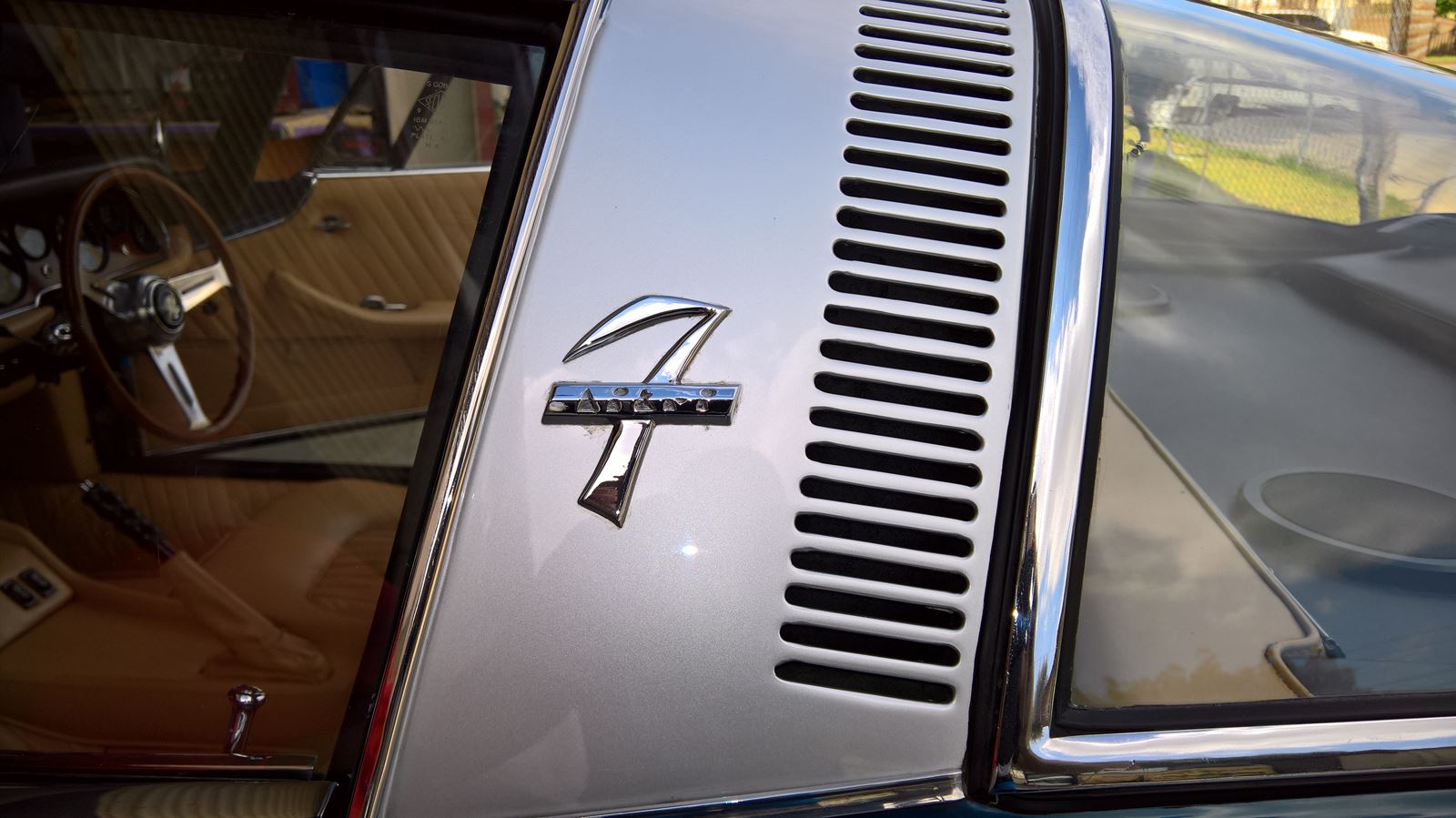 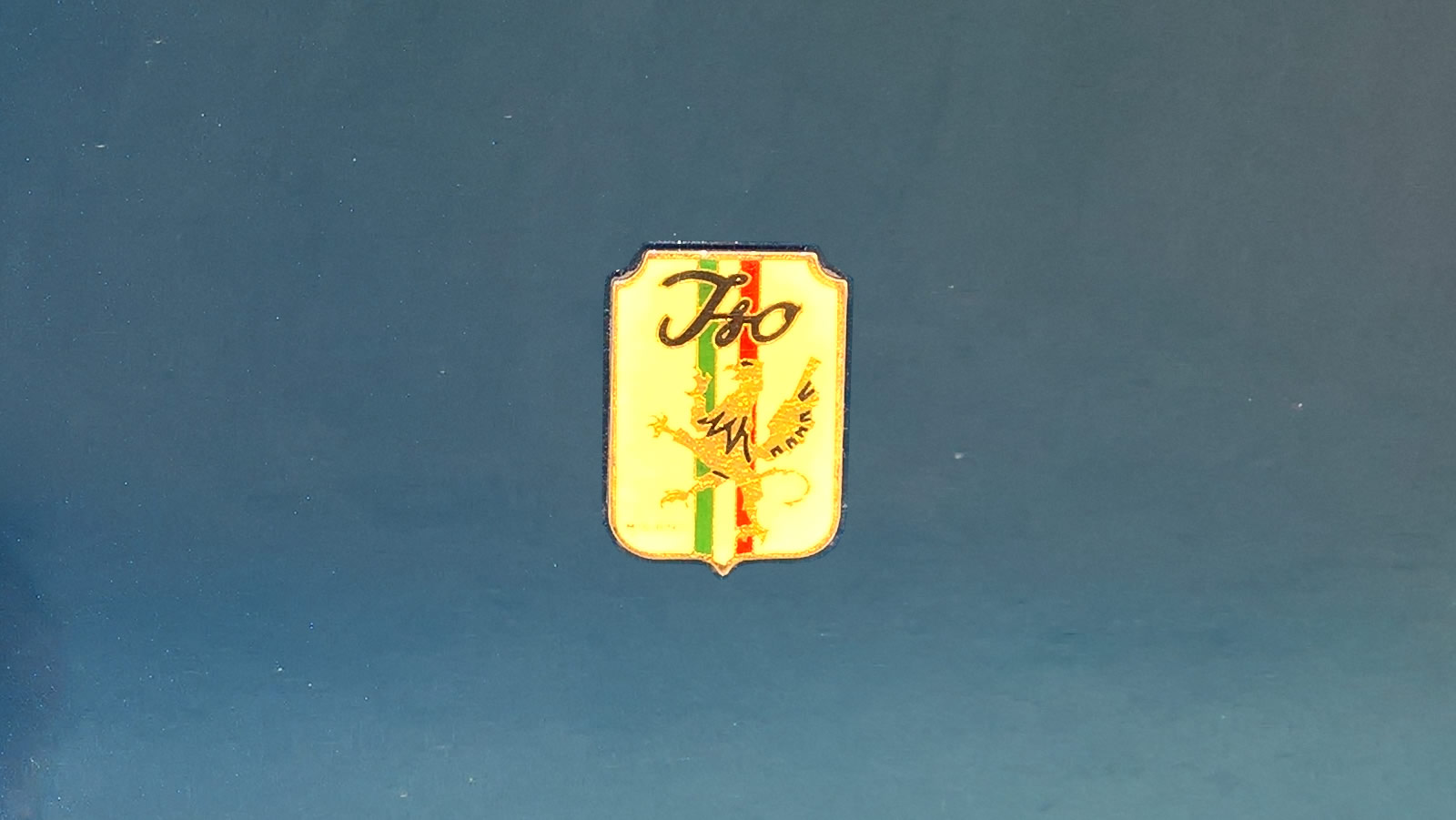 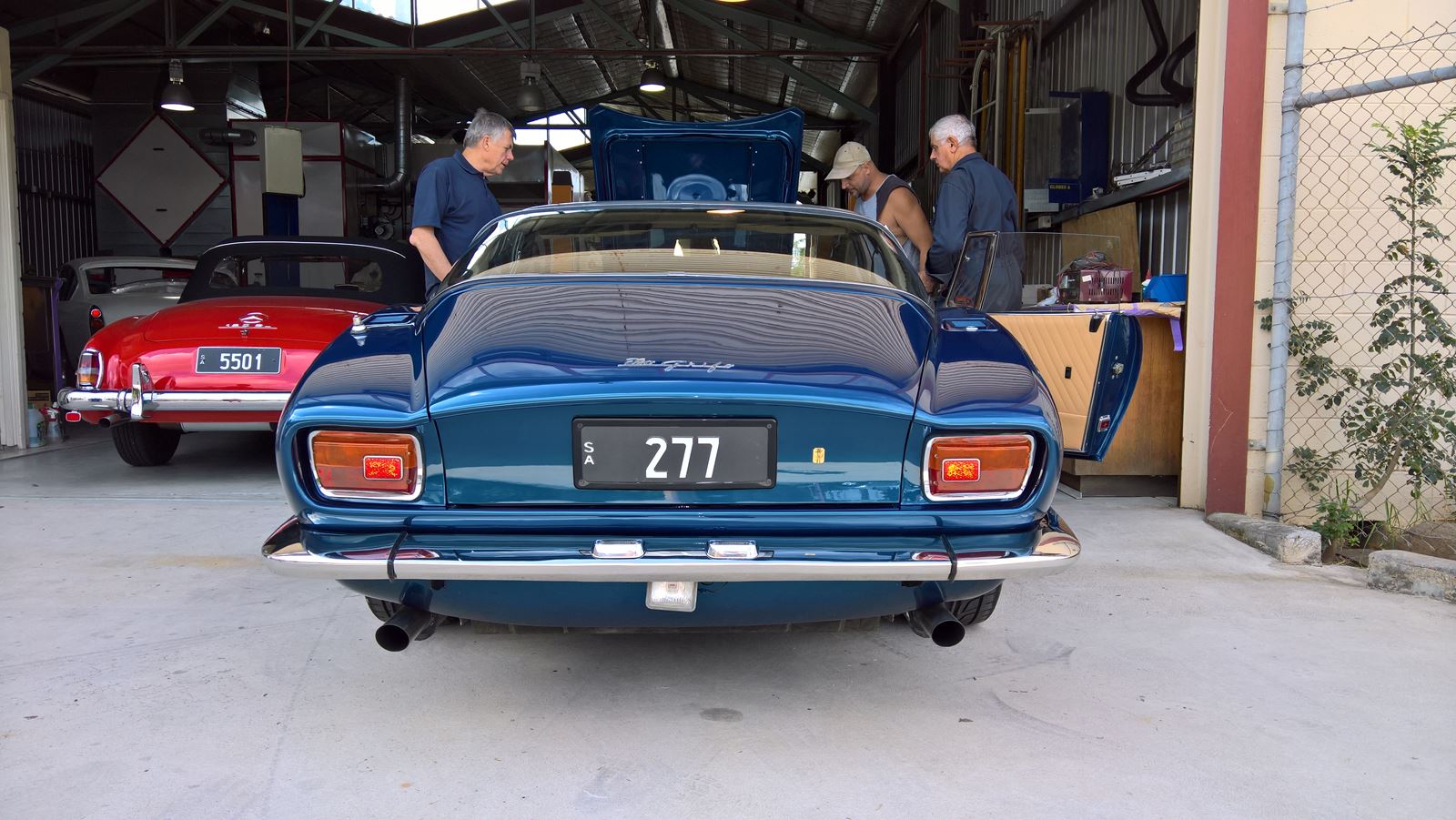 Sitting in the Iso Grifo, I wait with anticipation for the engine to catch alight; it makes all the mechanical whirrs, clicks and ticks of something purely analogue you expect. When the engine does start, the basso profundo cacophony that erupts from the tailpipes leaves you in no doubt that this is an Italian Muscle Car. What a sound, Barry White couldn't sing it better, can't get enough of your love baby is definitely where it's at. (Google Barry White if you're confused.)

When we leave the workshop where the Iso Grifo is stabled, I'm surprised how civilised it is. There is no histrionics; it pulls away smoothly, its ride even when mounting the driveway kerbing is surprisingly supple, as we merge with the regular afternoon Adelaide traffic I'm confounded by its drivability, except for its extraordinary value you could use it as a daily, it's that easy to manage.

It doesn't stop there, I was expecting a coarse, hairy-chested sports car but what you get is a refined fully muscled GT cruiser with the handling chops that deserve its Supercar ranking. There is absolutely no looseness in the drivetrain, or slop in the very direct steering; you don't expect a car of its vintage to drive as well as it does. It's a testament to the cars original engineering and the fastidious restoration it's undergone.

When the traffic clears, an open highway beckons, the taps are fully opened and all 560 horses are unleashed. The resultant headlong rush of acceleration has my brain trying to adjust; this thing is mental fast for today, let alone 1970. It's ability to put the power down, without the slightest fuss, despite it wearing modest 225 rear rubber is simply amazing. The capacity to go from rest to licence burning fast is literally a few heartbeats. I got to experience the full force of the Iso Grifo several times throughout our drive, the noise, the push in the back and resulting fury was not unlike an HSV R8 (only more so) and I still question how can this be a 47-year-old car? The 7.0-litre version of the Iso Grifo is supposed to be able to top 180mph; I have no reason to doubt that claim.

As a concession to safety, the brakes have undergone an upgrade, with large four-wheel ventilated discs now present it stops as good as it goes.

What about the handling you might ask? We weren't able to push the car very hard; we were on public roads, after all, the bit of twisty stuff we did experience had me realise it's only on a track you're going to see the Iso Grifo's upper limits. 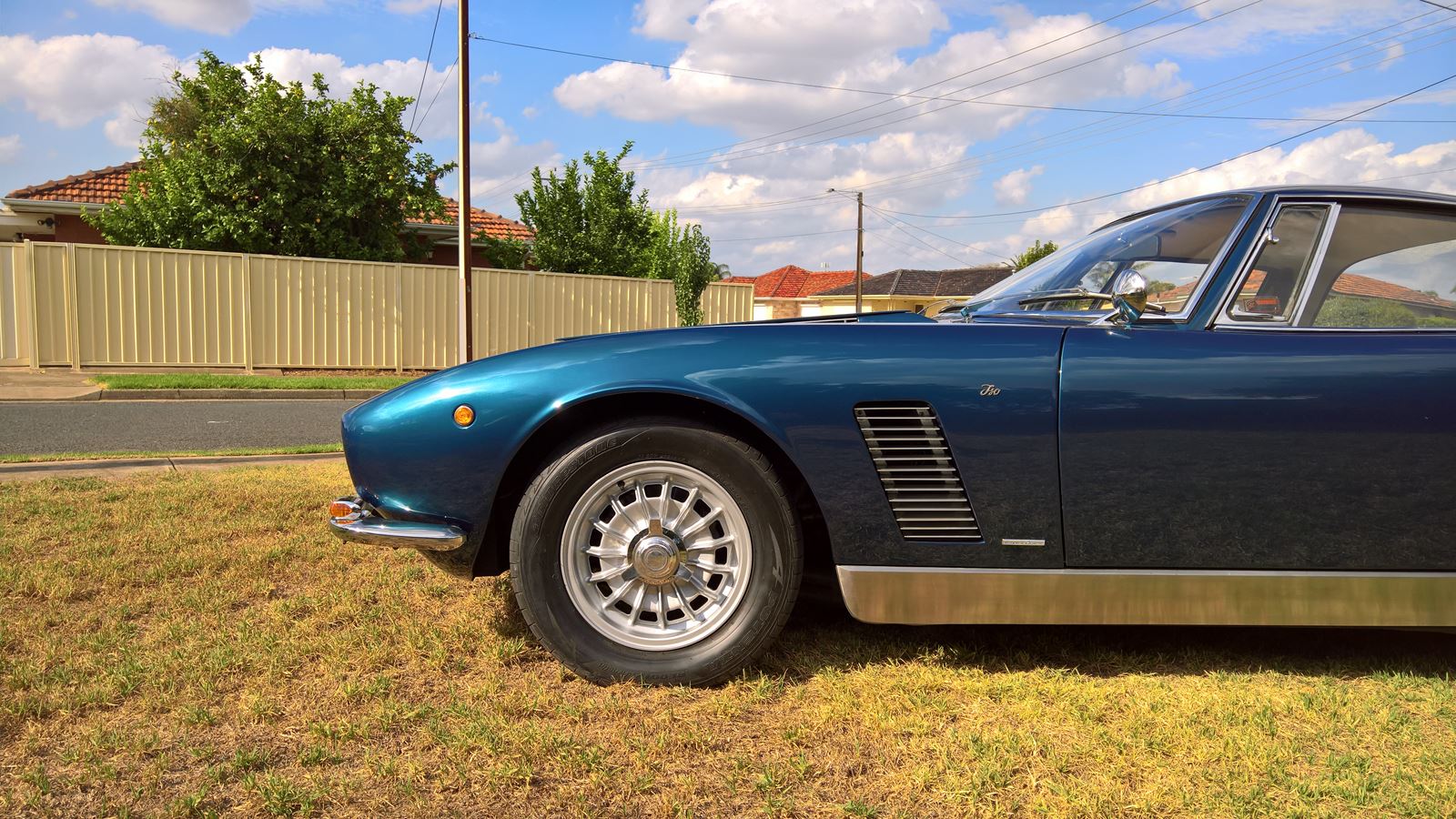 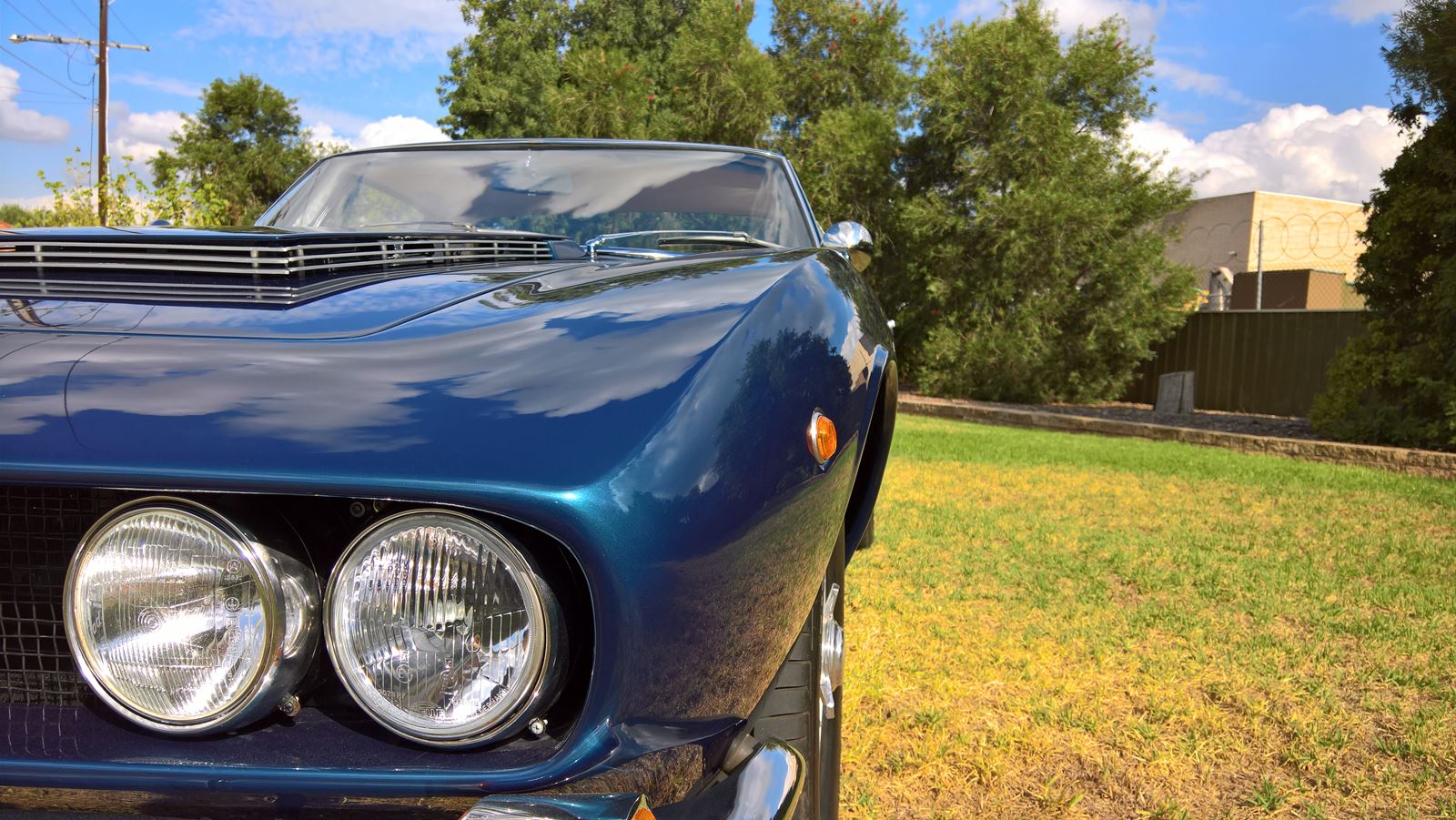 As we pull into the workshop and I exit the car, it's popping and pinging as the metals contract from its brisk workout; I'm left feeling elated, it has to go down as one of the best driving experiences of my life. It's a case where reality far exceeded my expectations and driving this Supercar Classic was a dream come true.

Thanks to Gerard and the team at Marque Restorations for making this dream possible.

A diamond in the rough: Lamborghini Countach, for sale in Adelaide