The car journalism stuff is still relatively new for me, I feel like a kid locked in a candy store, moreover a kid totally addicted to candy. Every time I drive a different car I feel that childlike excitement, I want more, give me more I say.

Like any kid addicted to candy, they have their favourite. Mine is Ferrari. I could only imagine how great that treat would taste, as up till recently, I'd never driven one.

It was on my bucket list as a must do, which I'm sure a lot of people reading this can identify with.

I've sat in several, been a passenger for a short jaunt in a 360 Modena in the late noughties - but driving one myself hadn't panned out.

I was in Italy... and it was something I just had to make happen. I mean, driving a Ferrari in the home country, it can't get better than that. What's more, I did it in Modena; birthplace of the legend himself.

I'd like to say all the stars aligned and divine providence had me standing outside the Ferrari factory, whereupon a Ferrari representative handed me the keys and said, "please, you must drive our car". 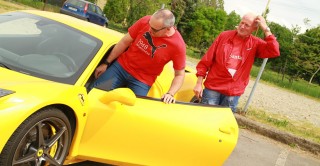 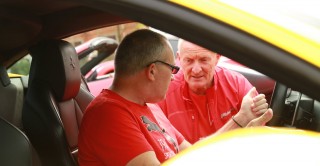 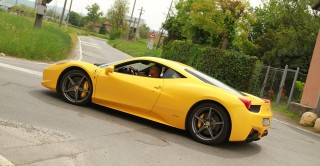 No, it wasn't like that, I was at the Ferrari museum (also on my bucket list) and before I got through the front door I was accosted by a very attractive Italian brunette wearing full Ferrari racing gear. In a broken English which sounded so good, she said, "Would you like to drive a Ferrari?"

Is the Pope Catholic? Does a bear do its business in the woods? I said, "Hell yeah I'd like to drive a Ferrari".

The attractive brunette started talking prices and cars available. I was already oblivious, a dribbling mess, I barely managed, "I don't care, just give me the keys, give me the keys".

I was then led to their office to pick a car, sign the relevant paperwork and go through how it all worked. Now, for the sign up I was handled by another very attractive Italian lady, this time a blonde.

I'm sensing a theme here - getting silly men (like me) who are already in a vulnerable Ferrari coma and upselling them by using one of the most powerful forces in the known universe. The inability to think clearly in the presence of a beautiful woman, great marketing ploy I reckon.

The cars available were a literal smorgasbord of recent Ferrari models, it had my head in a spin, how was I going to pick? The reality being, that the driving time limit and car you drove was dependent on how deep you wanted to dip into your pocket.

And what a selection of cars; from the F430 Scuderia, 458 Italia, 458 Italia Spyder, 458 Speciale, California T to the F12 Berlinetta. The lady at the counter was really pushing the F12, it was brand new and it's the most powerful. If you're going to do it, why not go all out, she said.

As it was I ended up spending three times the amount I'd initially consented to with the brunette outside the museum. I didn't end up picking the F12 though. Not because it was the most expensive but because I thought it would just be too much to handle for a first experience. I've read they can be quite the beast and if it can scare Jeremy Clarkson, I'd have no show.

Initially I chose a stripped out F430 Scuderia (yes I get that my logic is flawed and this may be as hairy as the F12), I always had a thing for one so the idea of driving something raw like a race car appealed to me.

It sure looked the part; a dark red with gold and black stripes flowing from the back of the car to the front. It also had the gold look wheels. I didn't get it though as someone beat me to it.

I ended up choosing a 458 Italia hardtop, dressed in Giallo Modena Yellow. If ever I get to own a Ferrari it has to be this colour, so I was really chuffed I got it for my first drive. 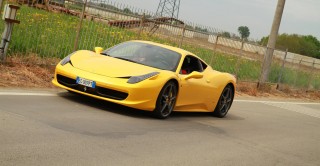 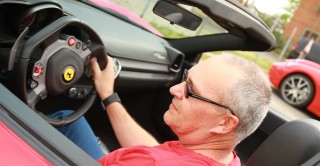 The drive itself -  of course we're talking really expensive cars here, so even though they give you the keys they aren't going to let you out in one unaccompanied. My co-pilot was an older Italian gentleman that spoke virtually no English but that didn't prevent us from communicating. We had a shared passion which bridged the gap. I liked him instantly, he had a typical Italian laid back attitude, where bending the rules is ok, just make sure you're careful and no one gets hurt.

How do I describe my first drive of a Ferrari, was it what I expected? Are they as good as they are claimed to be? Is the 458 as good as the rave reviews it received?

Let me answer that by saying, Woo-Hoo, it was even better than I expected.

Ok, I now understand the difference between a sports car and super car. I can say for the 458 Italia at least that it is so far beyond anything else I've driven, it makes everything I can compare to it, laughable, including my 2015 WRX STi.

And well it should be. When new, it cost more than 8 times that of my Subaru.

The steering response, braking, chassis dynamics and handling are out of this world. Within five minutes I was connected with the car at a level that would take hours in anything else. It's acceleration at full force is so brutally fast that I realised I was far beyond the ability to shift gears quick enough myself if it was equipped with a traditional gearbox.

The roads around Modena aren't great by any means, how the hell they get the car to remain so supple and yet maintain its precise posture is beyond me. On the steering wheel there's a button for 'bumpy road' mode. I worked out with my co-pilot that for anything but the track, its best left on.

An early criticism of the 458 was that the steering was a little twitchy, perhaps too fast. I have to say I didn't find that at all. Even though I hate to say it, but computer games came to mind. When playing a good car sim, you say to yourself that no car can handle that well, not in real life anyway. Well, the Italia does. The driving software and aero aides which the car deploys, mean you can have a driving experience which feels amped up to 11. You might not be a racing car hero but the car is so damn good you'll feel like one anyway.

One thing I clearly got from the drive is that the upper dynamic limits are so high, you can't possibly experience them on public roads, not if you have any common sense or value for your own life and those around you.

That doesn't detract from the fun the car is capable. The sheer joy of going through the motions at speeds that would be frankly absurd in pretty much everything but a supercar is something to be experienced. To put it in perspective, 160kmh in the Italia feels as manageable and as safe as 80kmh in a regular car. My co-pilot was pushing me to speeds that would have had me thinking twice in anything else I've driven, especially considering the conditions of the roads. Such is the superiority of the vehicle.

Is this what all recent supercars feel like to drive? No wonder the people that can afford these things get so addicted to the rush they provide. By the time I'd finished the drive I was wondering how I could liquidate all my assets and what body parts I'd allow for harvesting so that I could own one.

I left the car weak kneed and high on adrenaline. I couldn't stop laughing and it took me a good 48 hours to calm down. On reflection I can say it was one of the greatest car experiences I've had in my life. It also made me realise, somehow I have to make it happen, again and again and again…