Look, I know I've said it before but I'll say it again... How do you know you're getting old? You think a Volvo is cool.

Hear me, Volvo's are now cool and the current Volvo range have some real mojo. With the all new S90 making its Australian debut late this year, we may have another mid-size prestige sedan that can truly mix it with the German big 3.

There's been no serious competitor that could break the stranglehold on the mid-size luxury market dominated by Audi, BMW and Mercedes but the S90 could well do it. We say bring it on, it's a win/win situation for the consumer and more choice in this uber competitive sector means everyone has to lift their game. 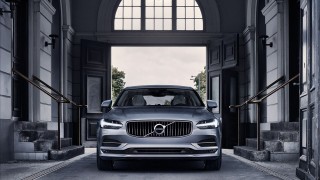 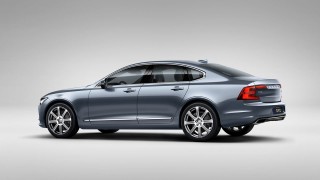 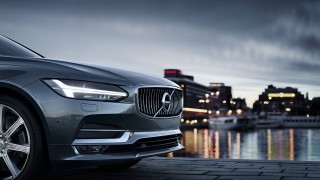 So what make us think the S90 could be a real player? Well in the first instance let's look at the styling, it just oozes class, and looks very much the sports saloon. Its front and side profiles stamp it as uniquely Volvo and there's something about the front grill and T shaped daytime running lights which shouts opulence and focus at the same time. What's particularly impressive about the styling is the way the tyres fill the wheel wells, giving it an athletic stance. The side rear window quarter glass also has an aggressive taper which sets it apart from its rivals. Looks like chrome bright work is in fashion again but a minimalist approach is used so it highlights the lines rather than dominating them.

The opulence doesn't stop at the exterior. The cabin shows restraint in its presentation, with the spotlight being centred on the large 9" inch Sensus Connect central display showing a portrait aspect a'la Tesla. The Sensus Connect takes smartphone connectivity to the next level. Web browsing, Facebook and video streaming will all be available direct from the display. The Sensus Connect is the control hub for the cars main features, using an intuitive touch screen interface incuding SAT NAV, climate control, in car audio etc. For the rest of the cabin, we find Scandinavian modernism, clean lines, adorned with light coloured wood grain, surrounded by tasteful matte sliver bright work. There are minimal switches and controls which clutter the cabin, it's all being taken care of by the Sensus Connect media centre.

Looks like manufacturers are transitioning to TFT screens for instrument clusters as we see the S90 utilise a fully digital display, the graphics are sharp and the presentation is in keeping with its luxury image. Of course leather abounds further reinforcing that this is a luxury vehicle. 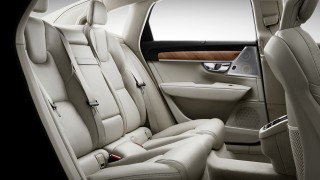 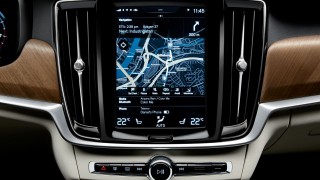 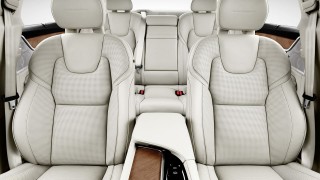 All drive trains feature permanent all-wheel drive and an eight speed automatic transmission. On the performance front, we can expect the T8 edition to knock off the 0 to 100kmh sprint in the low 5's, so performance aplenty then.

There is no official word if the range topping T8 plugin hybrid edition will be available in Australia, it pairs the 2.0-liter, turbocharged and supercharged petrol four with a 60-kW electric motor connected to the rear axle, for a combined output of 298Kw horsepower and whopping 640Nm of torque. The sprint to 100Kmh should be done and dusted in 4.5 seconds, that's edging into Super Sedan territory.

For the suspension setup there are control arms up front and a transverse leaf spring at the rear, optionally you can select air suspension for the rear.

The S90 will feature uprated Pilot Assist technology first seen on the XC90 SUV as standard. The S90 will be able to self-steer at speeds up to 130kmh and features car guidance based purely on lane markings. It also has adaptive cruise control so it will brake and accelerate according to the traffic conditions which the inbuilt sensors detect.

Volvo is planning for fully automated driving by 2020 and part of that technology includes Volvo's City Safety system to be included in the S90 as standard. It has the ability to recognise and react to multiple objects such as, large animals, pedestrians, cyclists and other vehicles and will activate emergency braking and collision avoidance if it deems the driver is not taking necessary action to avoid an accident. Volvo has also made claims that it has calibrated the City Safety software for Australian vehicles to be able to recognise kangaroos. Onya Skippy.

No official word on pricing yet but expect the base model T6 petrol to cost around $85K, drive away.

All up, the S90 appears to be the complete mid-size sport saloon package, here's hoping. 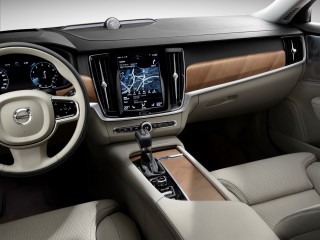 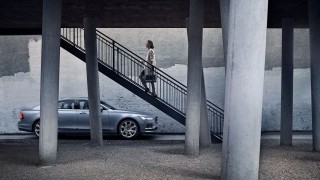 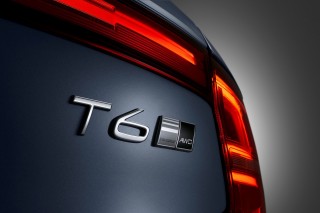 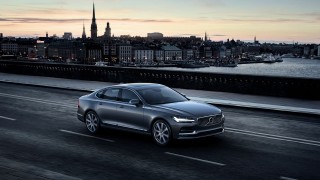 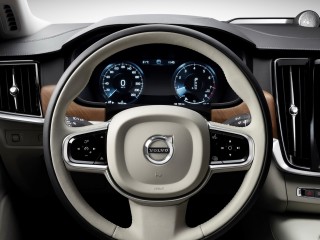 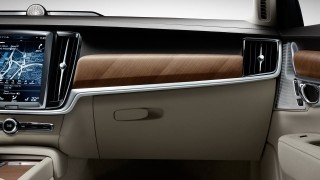