Here in Aus, we're about as far away from an autobahn as you can get but it didn't stop me thinking about it while driving my mates 2016 BMW 428i.

Yep, I wished that machine and I were on an autobahn enjoying the 428i the way it was meant to be, unfettered by our over-policed driving laws and free to enjoy the sheer engineering brilliance which the BMW 428i possesses. I'd have Kraftwerk blaring, the chorus echoing through the cabin, "Fahren Fahren Fahren auf der Autobahn". It's a classic - for any of you that don't know it, do yourself a favour and YouTube it, you'll be glad you did.

Don't get me wrong, I enjoyed my stint behind the wheel of the Beemer, it's just that even at our national posted limit of 110km/h, it's doesn't even begin to flex its muscles. Doing a 110km/h in the 4 Series BMW feels about the same as 50km/h in anything else. Such is its turbine-like power delivery; its smoothness and the sound insulating properties of the cabin mean that even at highway speeds you're wafting along in near silence.

Until you've driven a late model Beemer (and Audi or Merc for that matter), you're not going to understand the value of its prestige badge. When a BMW driver tells you it's more than just a car, I hate to admit it but for the most part it's true. You could never call me a dyed in the wool BMW fan, but my takeaway from my 428i experience is the car, and the marque is much better than I normally credit. 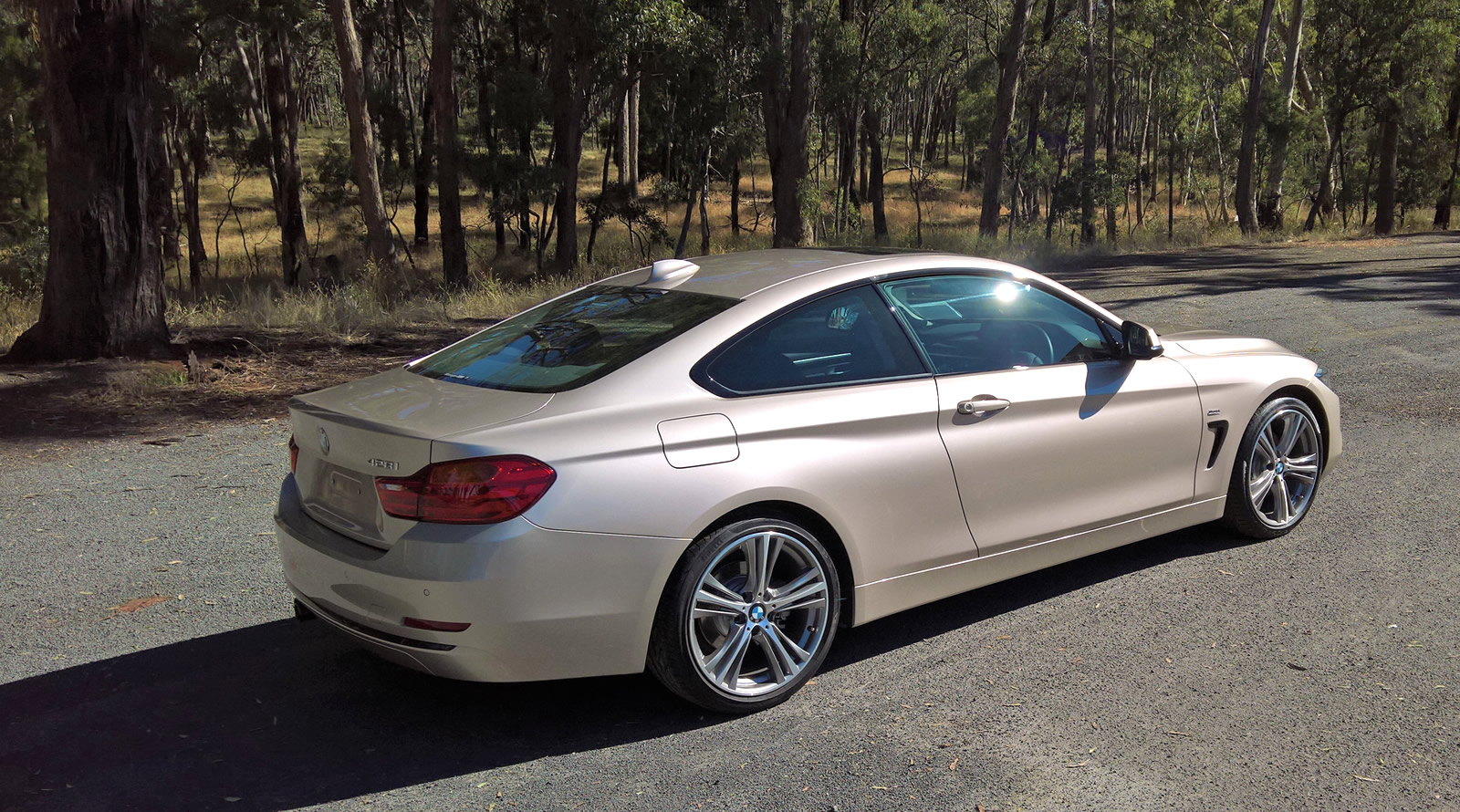 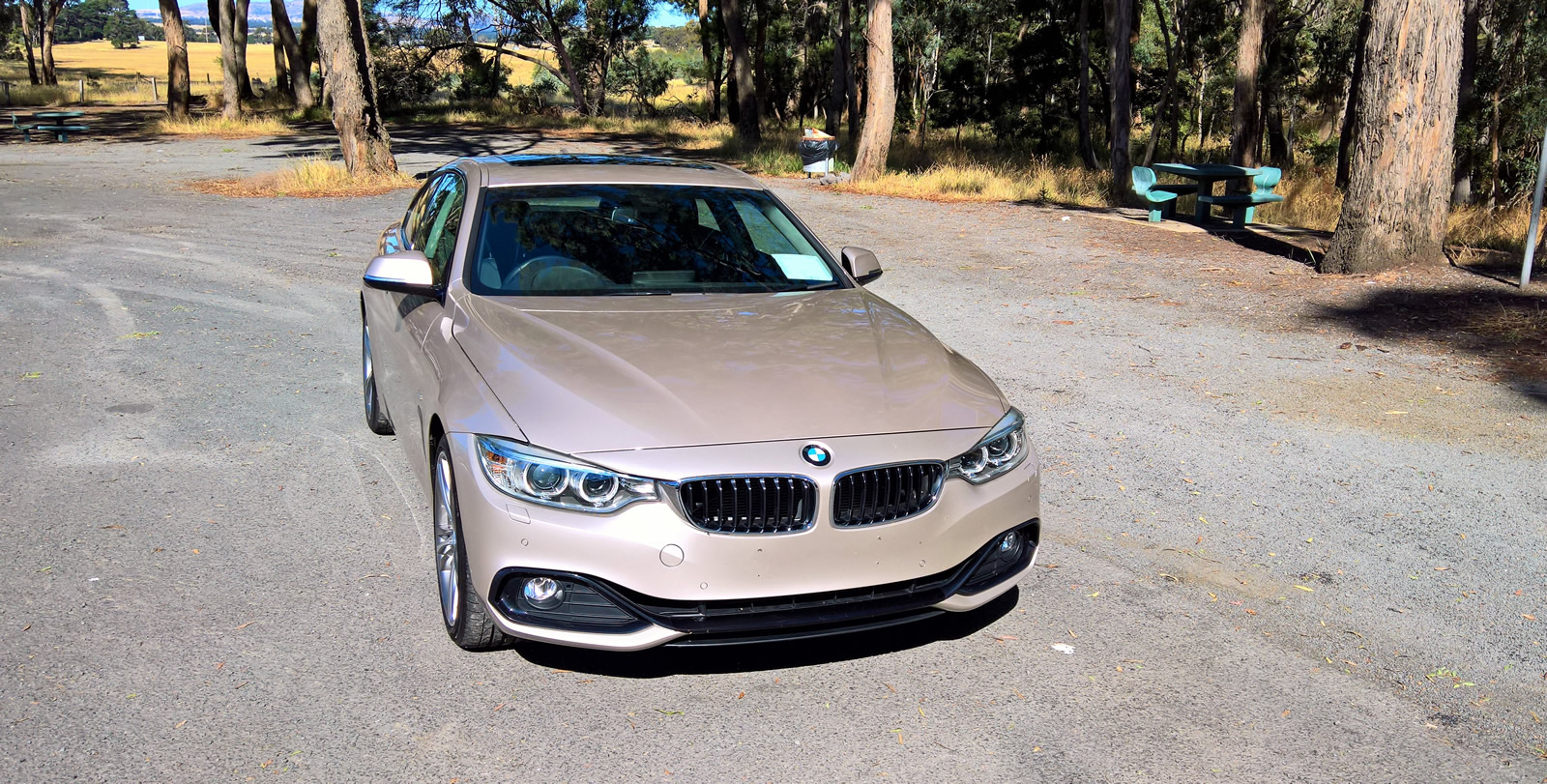 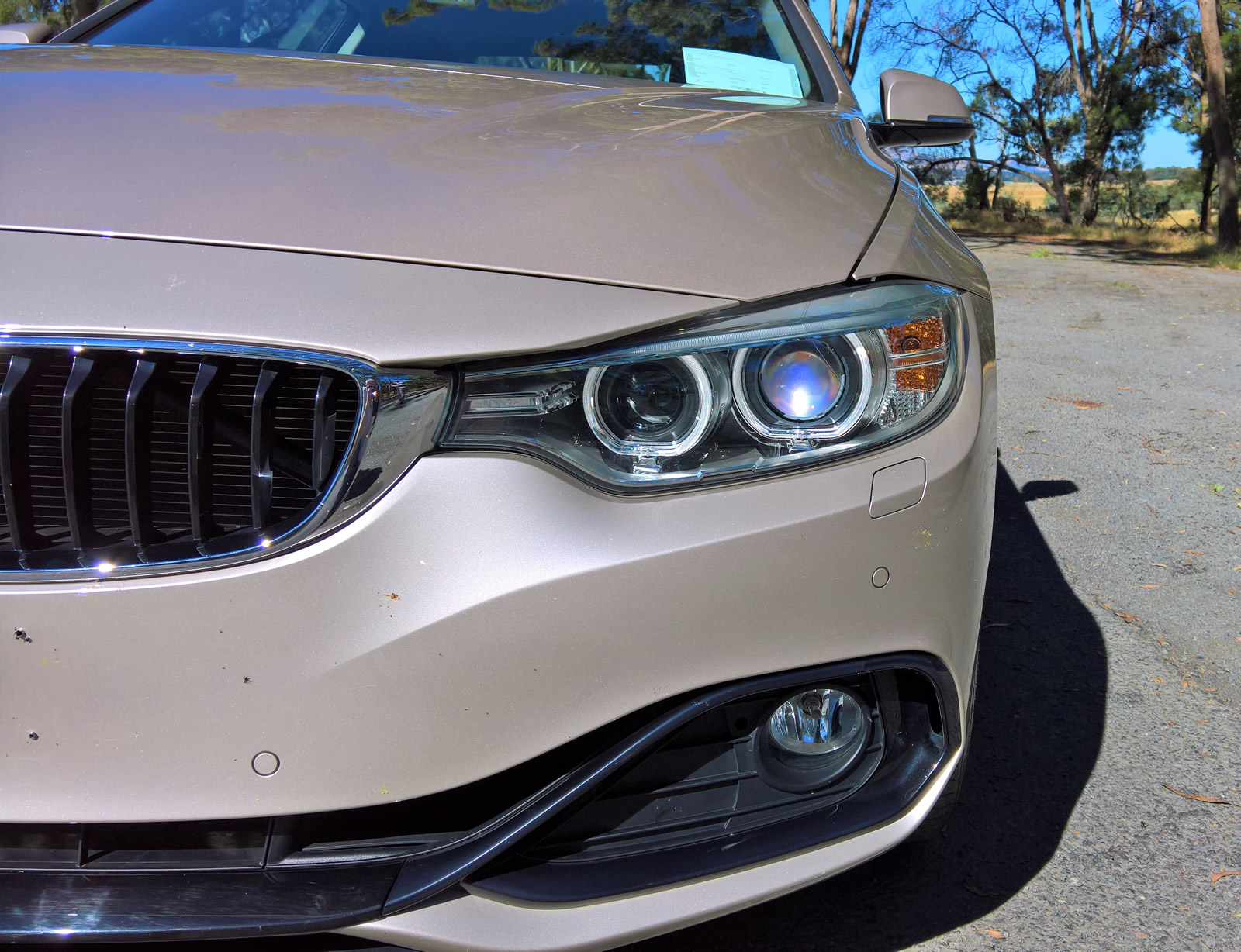 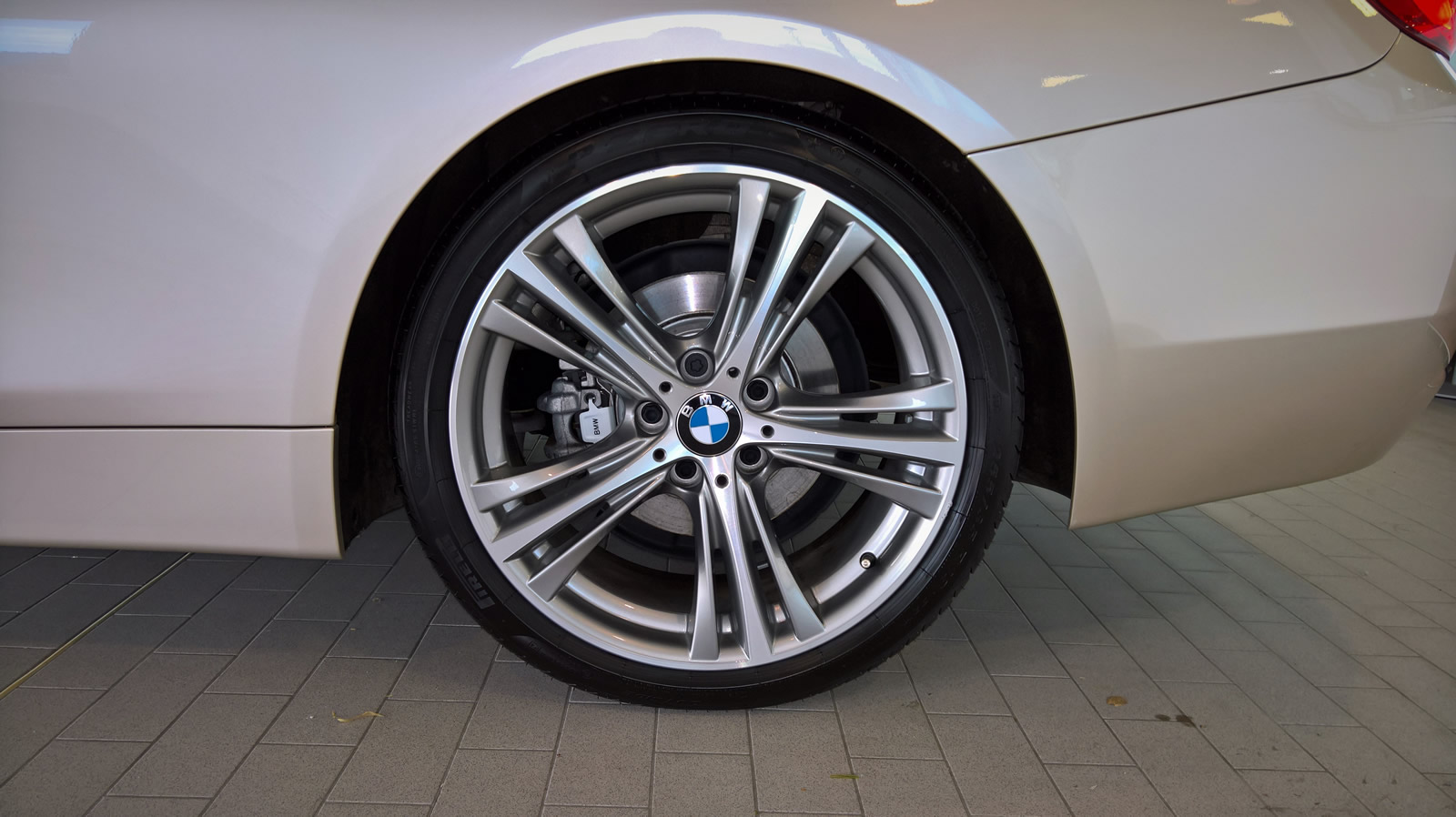 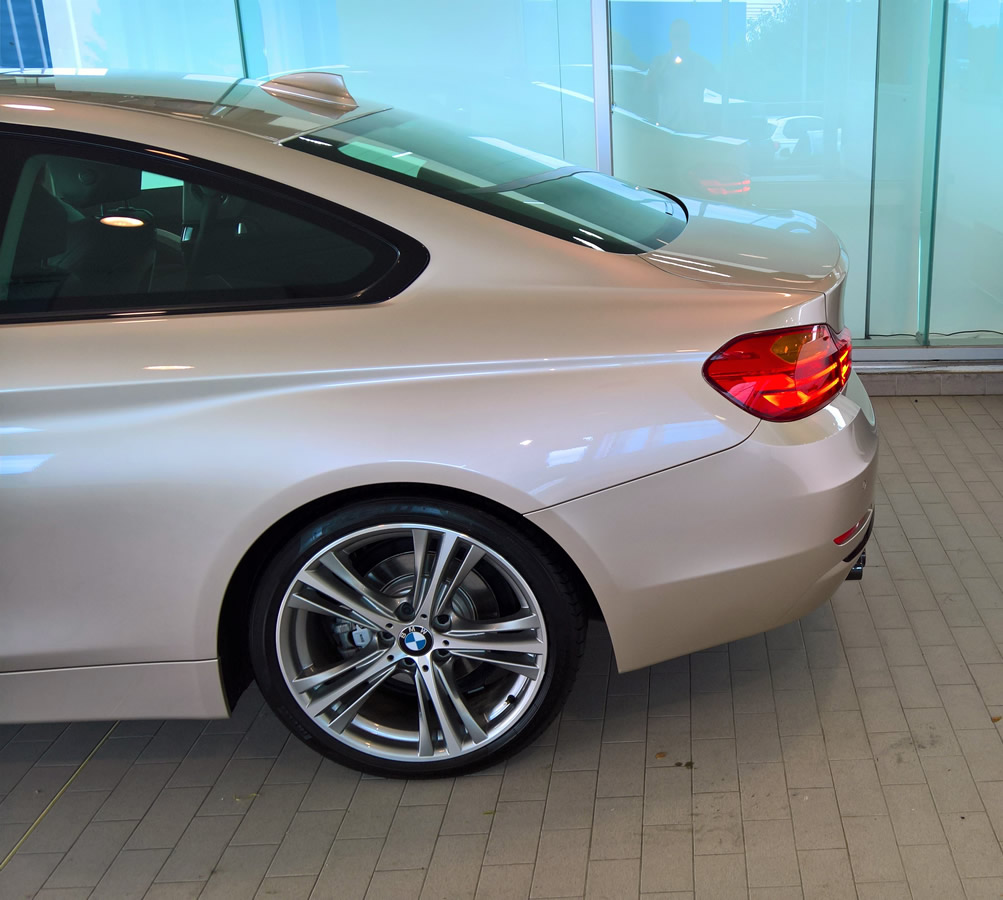 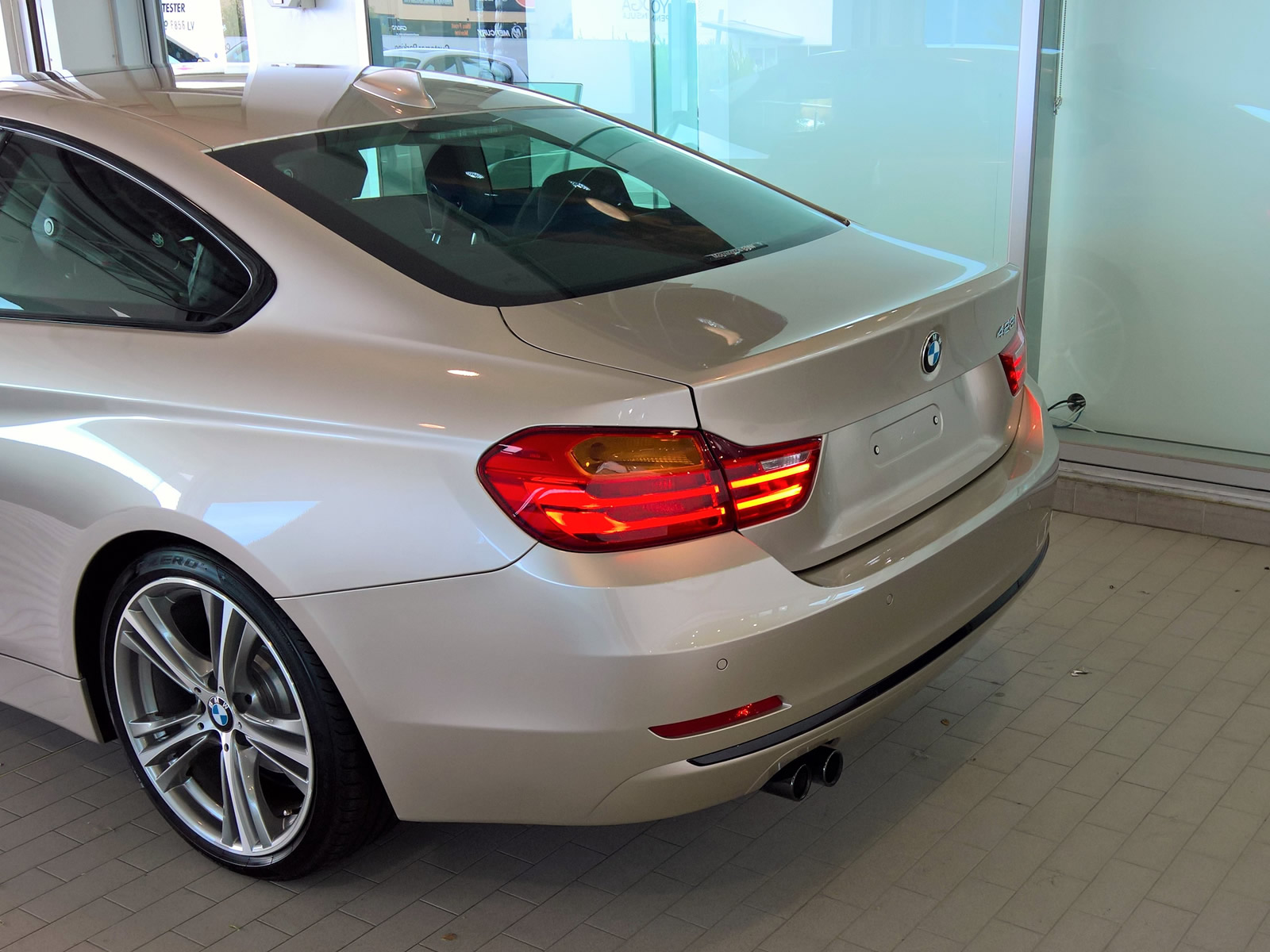 So how'd I end up behind the wheel of a BMW 428i in the first place? Well to explain that we have to go back a bit, a couple of years as a matter of fact. A close mate of mine, Tim, who's not car obsessed like me but likes a sweet drive regardless, was finally in a position to indulge a dream of his, and that was owning a BMW. The first time he mentioned it, the BMW 4 Series still hadn't landed in Australia yet, he'd been doing his research, and the 4 Series as a coupe was the Beemer he wanted, more accurately lusted after.

He talked about it incessantly, much to his partner's annoyance and his kids going, "Yeah, right, whatever Dad, we'll believe it when we see it".

The tipping point came about a month ago. My mate went through his usual dialogue, "Well, I'm thinking about getting the Beemer but I'm not quite ready for it. So I'm going to keep driving the Mazda 3 for a year or so and I'm going to buy Niki a new Hyundai i20."

Said partner Niki, had been driving the Mazda 3 for the last two months while hubby was overseas working. When she heard his brilliant plan, World War III broke out. You see, there was no way his other half was going to accept the Hyundai i20; she'd gotten used of the Mazda. It went something like, "You can bash it where the sun don't shine if you think I'm going to be driving around in a cheap and nasty Hyundai i30 while you're driving your luxurious Mazda." It's at this point Tim saw reason and said, "Of course dear, I wouldn't want you or the children compromised, what was I thinking!"

One crisis averted, but the dilemma was, brand new the 428i is as near enough to $90,000 AUD it doesn't matter, not a price my mate was willing to pay. He was also feeling the pressure of it was now or never on his dream of owning the Beemer.

That's where I came in cos I'm the go-to guy amongst my friends when it comes to cars. With chin cupped in one hand, and scratching my navel with the other, I contemplated, "Tim, I reckon if you go for near new interstate, you should find yourself a sweet ride at the price you're willing to pay."

Unfortunately, in Adelaide, we pay a premium to due to our remoteness from pretty much everything, which sucks. It shouldn't be that way; we're an actual city after all with a population of nearly 1.3 million, but I guess our locale makes things logistically difficult.

So Tim dutifully did the research and it turns out I was right; he found a 2016 BMW 428i Sport Line F32 Auto with just under 7,000 kilometres on the clock for $60,000 drive away including fixed price servicing and nearly three years remaining on its warranty. All this from an official BMW dealer, no strings attached.

He asked me to check it out, bargain says I, I told him to go for it. Tim went way out of his comfort zone and bought the car sight unseen doing the deal entirely on the phone. It made me proud it did.

So that's how we ended up in the beautiful Mornington Penninsula, South East Victoria, some 800 kilometres away from Adelaide picking up the BMW. 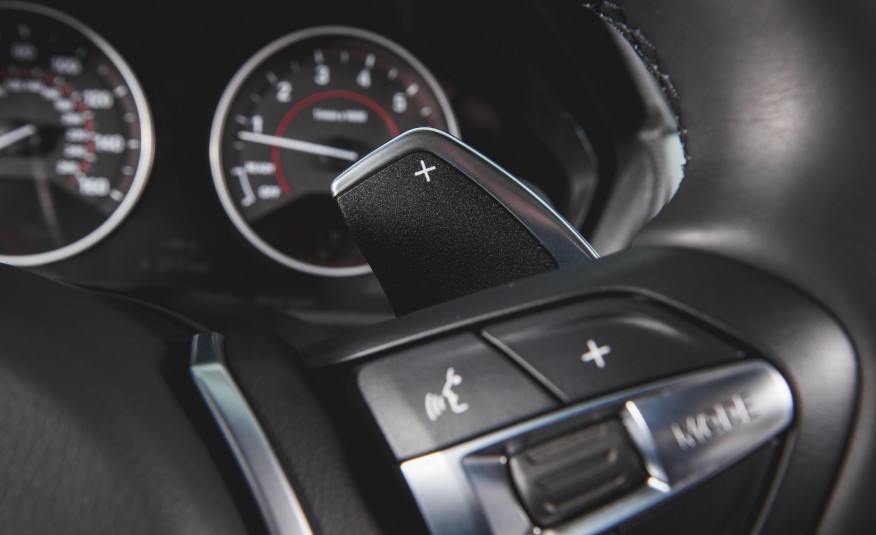 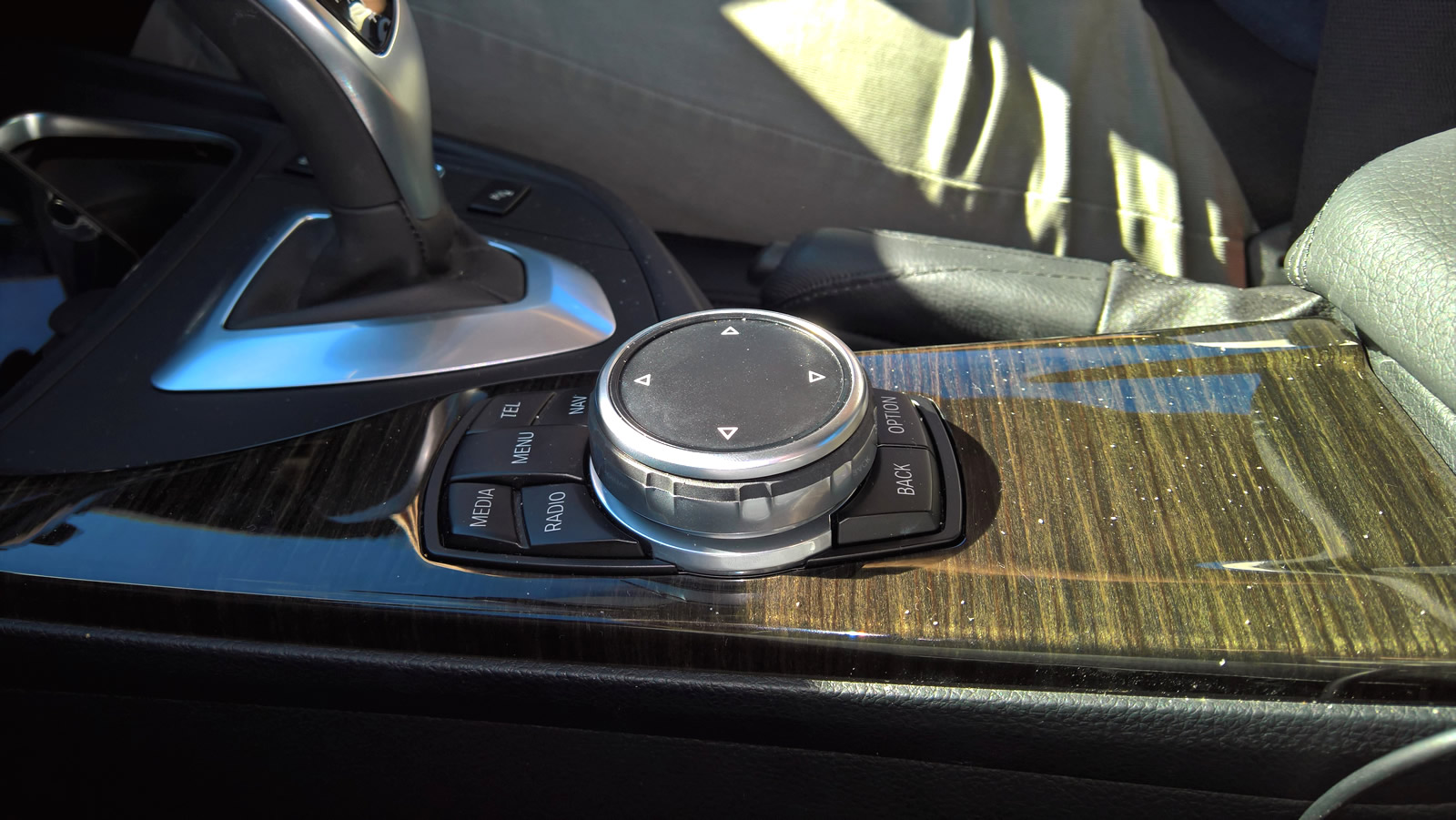 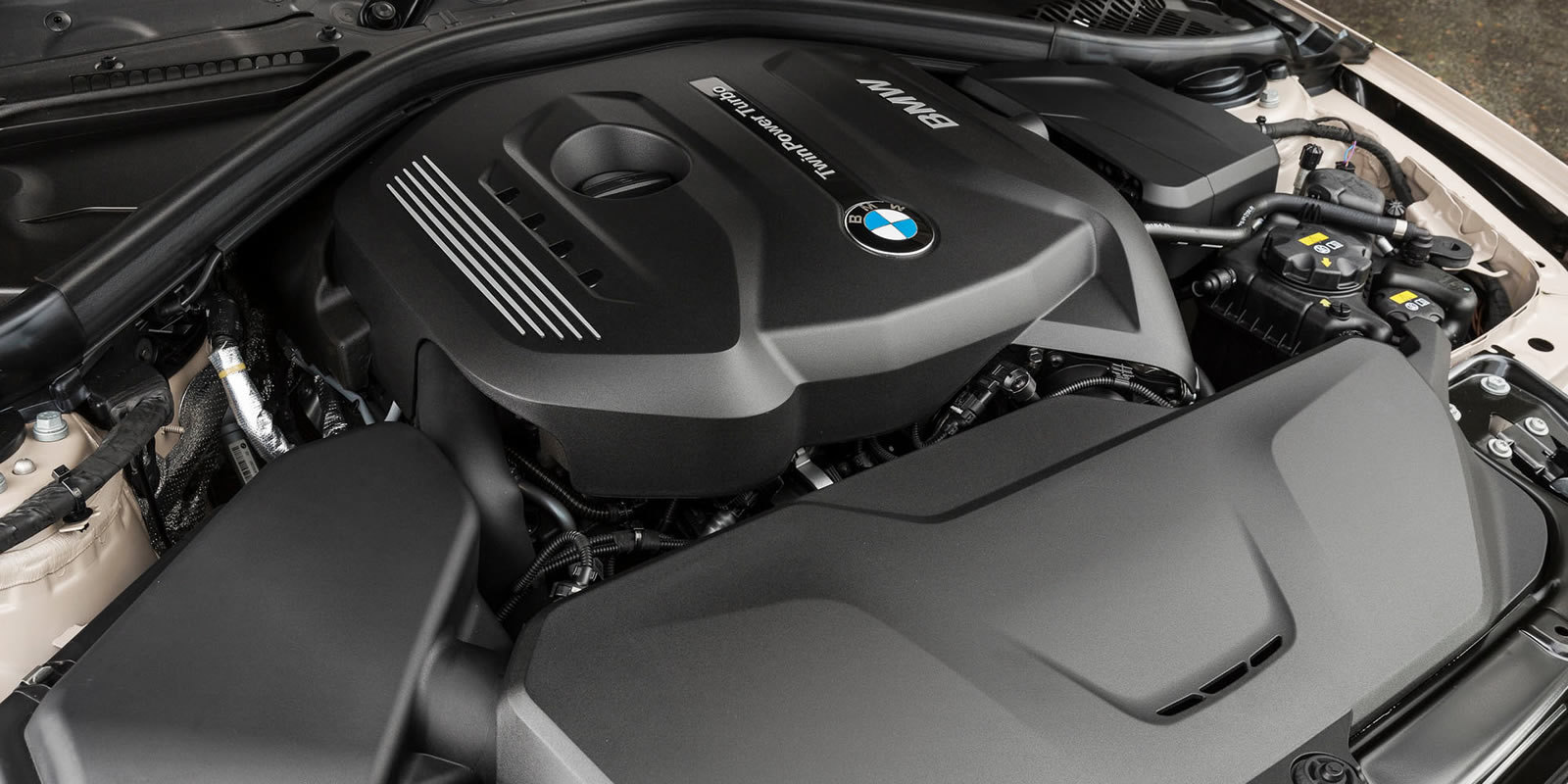 Driving the 428i back to Adelaide hadn't prepared me for just how good it is, the build quality, the effort put into engineering and attention to detail is quite simply amazing. The technology integrated into the vehicle requires a PhD in I.T. just to get your head around the features on offer.

Not only is the technology included impressive, but it's also seamless in its operation, Shane our friendly sales guy set up the unique customer ID for the car, which is tied in with the key fob and the cars master brain. It has an independent 4G mobile network built into the car, and with it, you can access the "BMW Concierge" services. He demoed it for us when we asked for directions back to Melbournes Tullamarine Airport to drop off a hire car, thinking it was the best way to show it off.

I was gobsmacked when a young lady answered in a cultured English accent, "This is BMW Concierge services, Tim, I see you're newly set up with our network. How can we help you today?" But that's not the best bit, when we said we wanted directions to the airport, our friendly English lady sent it directly to the car's Sat Nav, bingo bango bongo, we were ready to go!

When the BMW 428i is on the open road, it's then you can appreciate the cohesive solidarity of its engineering. It feels like it's hewn from a solid billet of steel, there is simply no flex, or shake present no matter how hard you push. It's also deceptively quick, remember this is not a cooking model, it's more in the middle of the pack. Even so, its performance is impressive, 0 to 100km/h in 5.8 seconds is brisk by anyone's standards.

The raw numbers for the car don't paint an accurate picture for what it's capable of, considering its modest engine capacity of just 2.0-litres. Peak power output of 180kW @ 6500rpm and a very broad torque band of 350Nm available from just 1250rpm and peaking at 4800rpm. The generous spread of the torque band and sophisticated 8-speed ZF transmission go a long way to explaining the 428i's better than good performance. It's also relatively lithe with a kerb weight of 1470kg.

Because the power delivery is so refined, and the car so quiet, especially when highway cruising, it's all too easy to be on the wrong side of the law quicker than you can blink. You're loping along at what you think is the national limit, glancing down at the speedo, realising if the Rozzers were in sight you have well and truly just burnt your licence.

Of course with the plethora of both passive and active driver aid tech present, even when left to its own devices the car still provides an involving drive, it's an excellent corner carver. If you want to go hardcore and turn all the driver aids off, (you can't entirely), the 428i chassis setup is such that you can have some real fun and the rear will step out if that's your thing.

The braking power of the 428i is also prodigious, fade-free, and easily modulated via the pedal.

The other thing that most impressed was the overall fuel consumption for the return trip, at just under 7.0-litres per 100 kilometres which included some hard driving, it gave a better account than Tim's Mazda 3 on the same drive. That's German efficiency for you!

Are there downsides to the 428i? Sure no car is perfect, but those downsides are only going to matter to the hardcore enthusiast, and the BMW marketing machine has that well and truly covered with their M products. The exhaust note is too quiet, even under heavy load, there is an inkling that something special is going on, but it's too subdued both inside and outside the cabin.

The interior is also a little too grey suit for my tastes. Again don't get me wrong, the presentation, beautifully executed, the quality of fit and finish, the materials used are outstanding. The seating and ergonomics to are peerless, cosseting luxury. A long haul trip like that of Melbourne to Adelaide makes you realise why BMW the brand is highly regarded; you'll hardly suffer from stress or fatigue driving one.

So all in all, the BMW 428i is an excellent luxury executive coupe express, and if you're prepared to do your research, you could find yourself a nearly new example with minimal K's for as little as $60K AUD drive away. Bang for buck for sure! 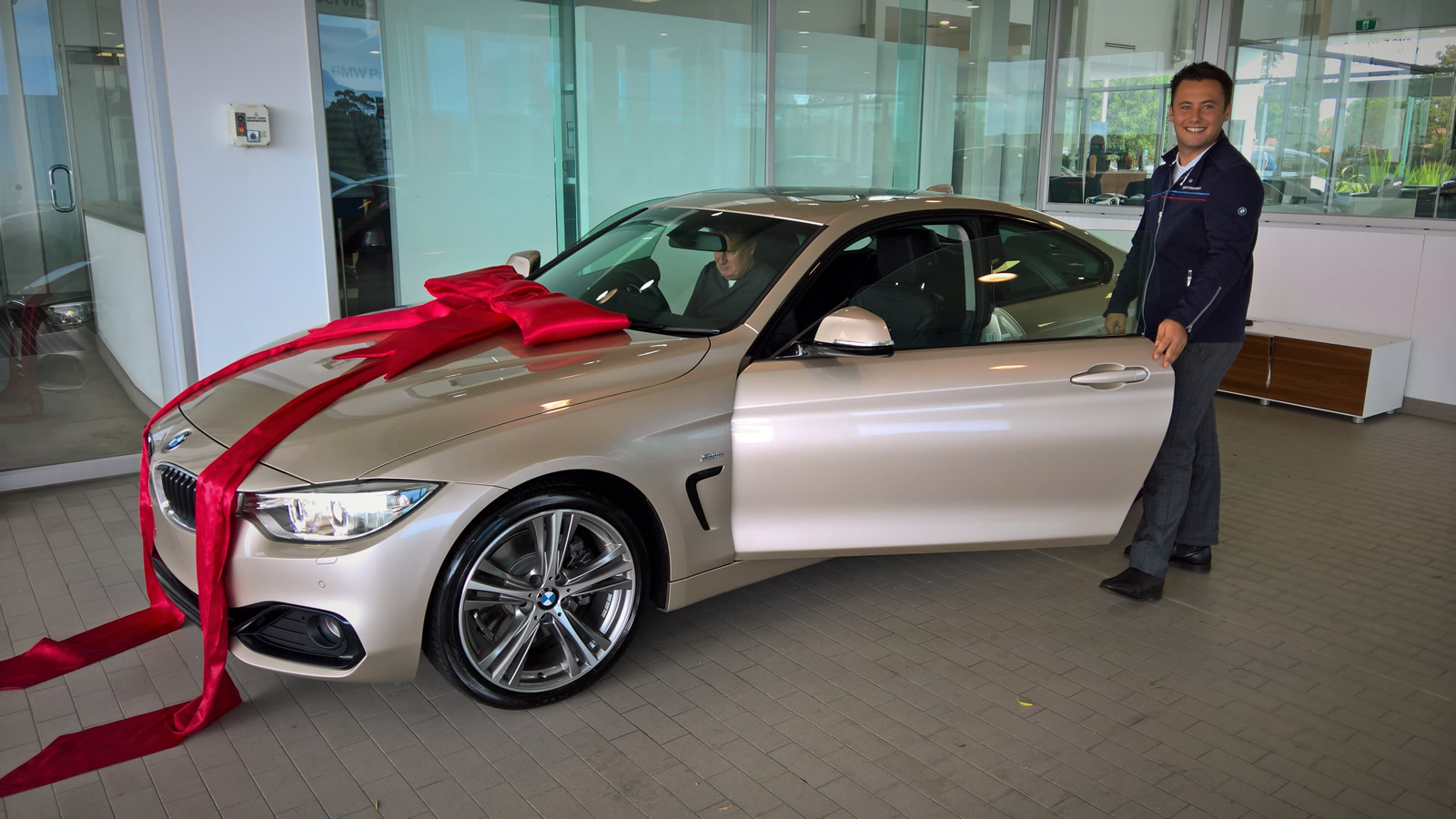 *Please note features can vary markedly from car to car based on options fitted by the original owner.