You have to hand it to the Germans when it comes to sports sedans; if excitement is on your agenda, boy, they sure deliver. Not only excitement but poise, refinement and precision as only the Germans can do.

The new Mercedes AMG E63 S is all of the above, and you wouldn't call it a sheep in wolves clothing either. Nope, this thing would scare the crap out of said wolves! If your penchant is a sedan capable of hauling the family and also keeping Ferrari's, Lambo's and Porsches honest, then this is the right car for you. Provided you have a quarter of a million clams - yes, at $250,000 AUD or thereabouts you're at the elite end of the spectrum.

So why is the new Mercedes AMG E63 S probably the best petrol-powered sports saloon on the planet right now? Read on. 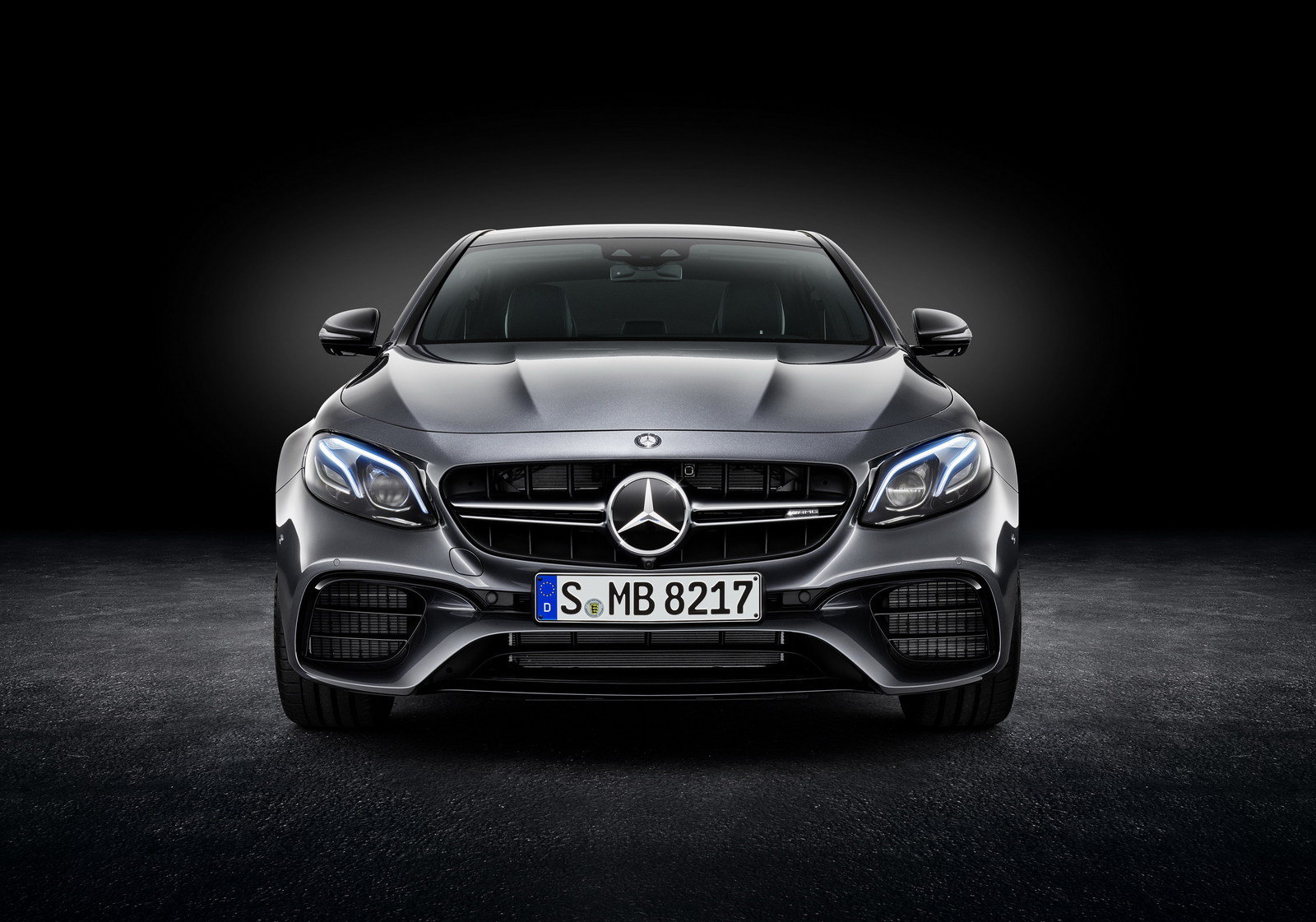 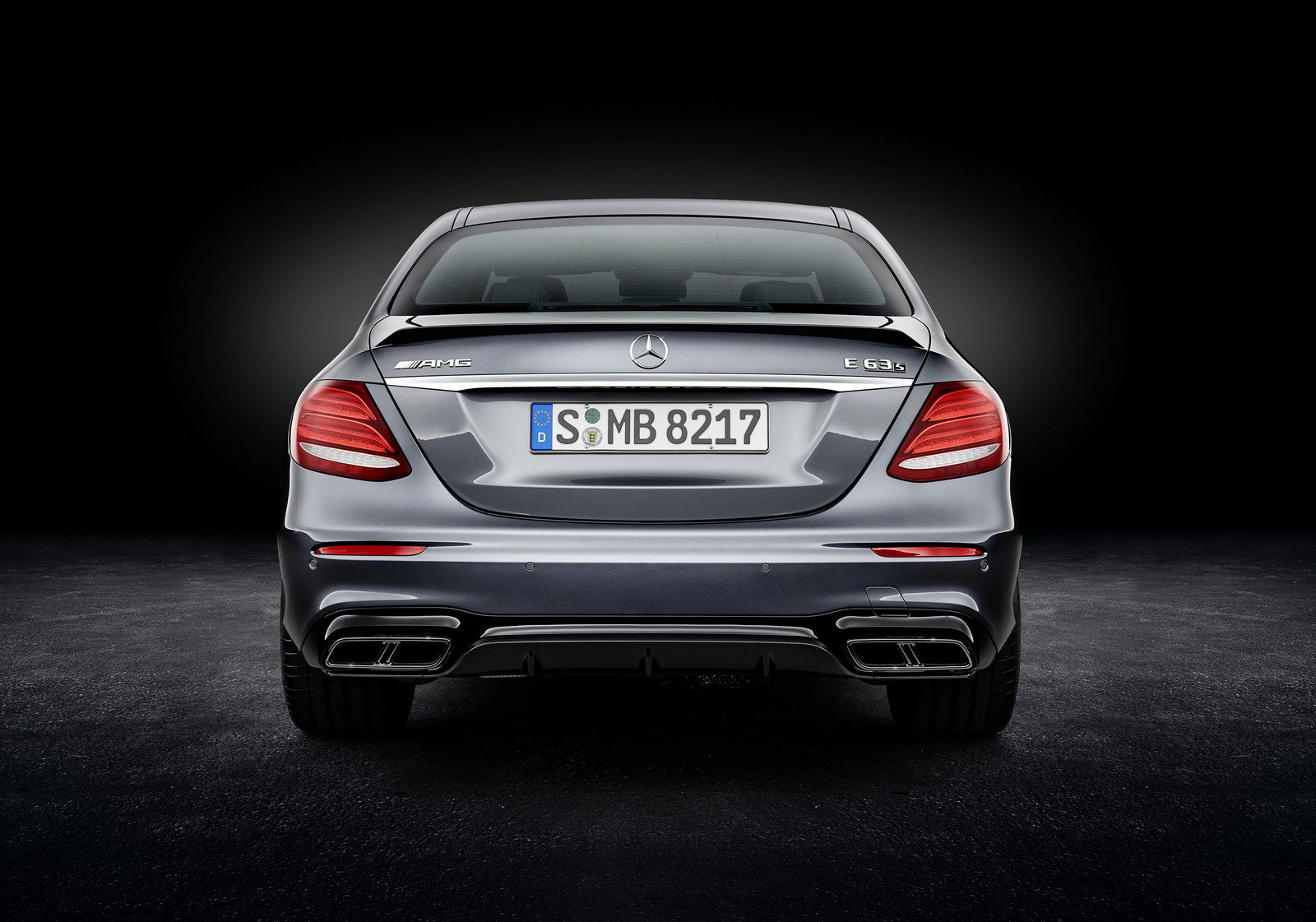 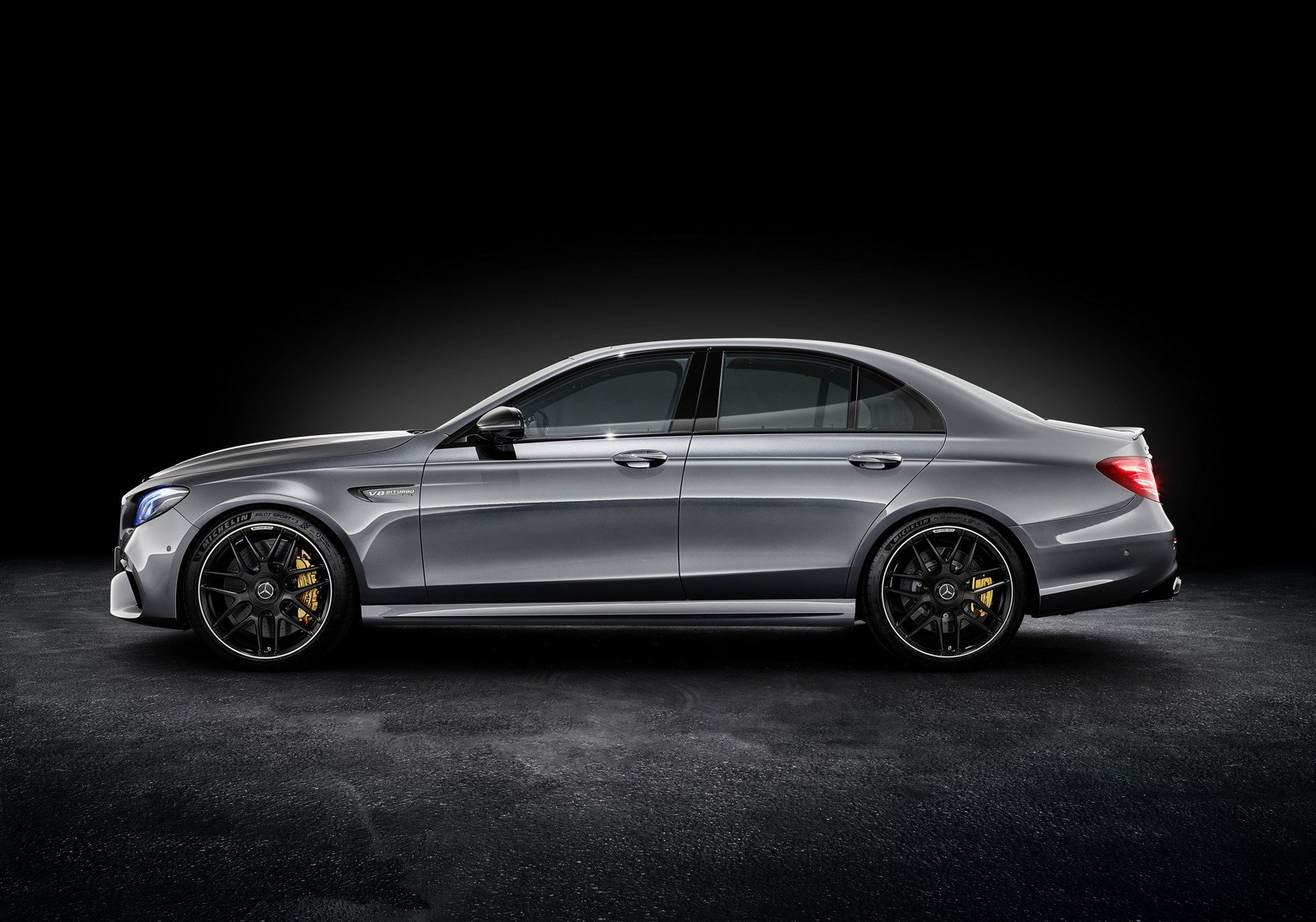 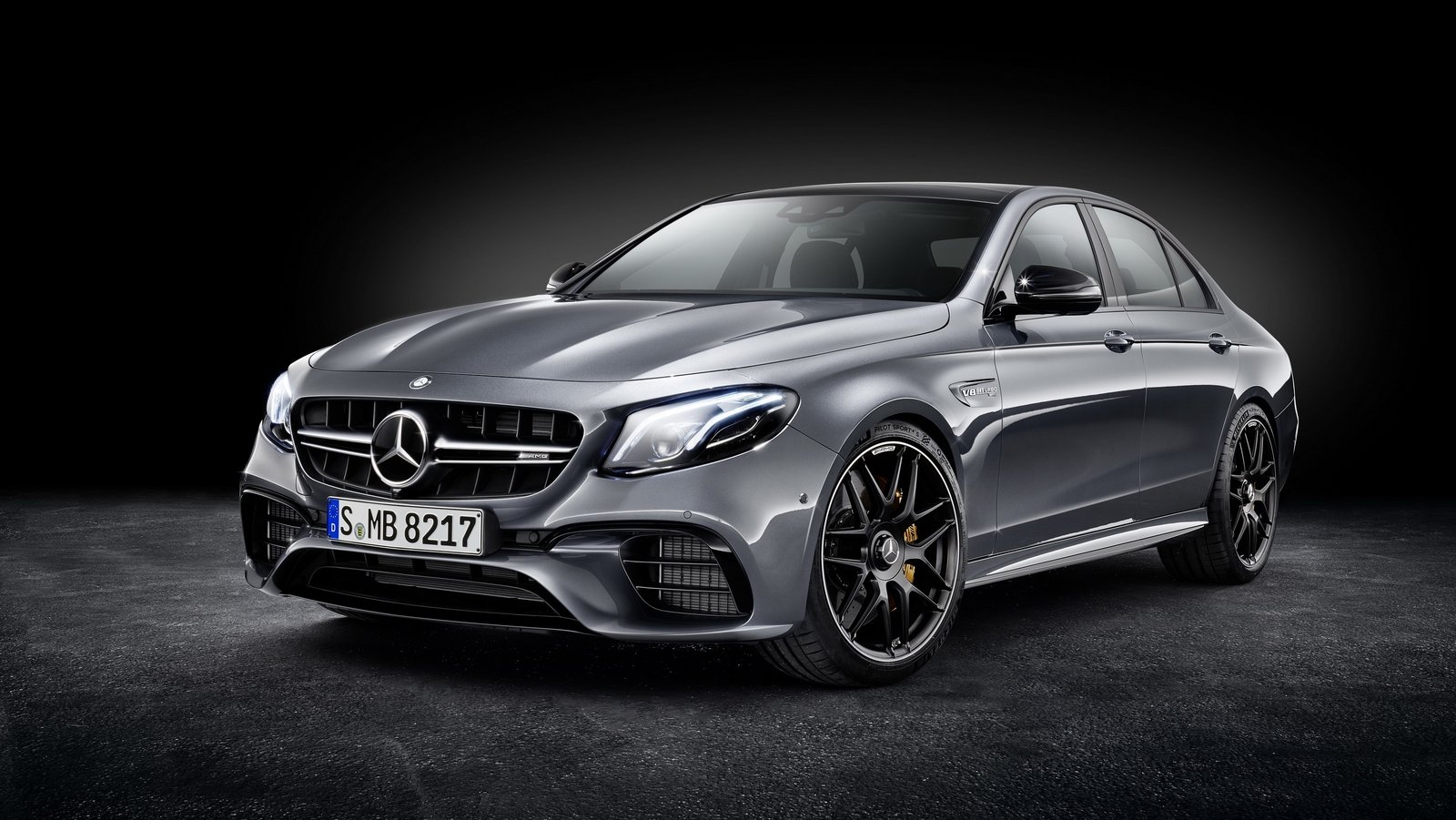 Audi, BMW and Mercedes have all been doing their part to comply with the Euro Emissions Standards to produce greener, cleaner cars. Most of meeting those targets have been through downsizing and going the turbocharged route. For a lot of us, that's meant a loss of character, some of the spark, the brawn, the essence of thumping big naturally aspirated V8's is missing.

Not so with the Mercedes AMG E63 S, it packs a helluva wallop and then some. Despite a modest displacement of 4.0-litres (the prior model displaced 5.5-litres), the E63's twin turbo V8 possesses headlining numbers. How's 450kW @ 6500rpm and a peak torque of 850Nm between 2500rpm to 4500rpm sound? Phew, it's packing a lot of heat! More gob-smacking is the quoted 0 to 100km/h dash, just 3.4 seconds, absurd! Ignoring that is incredibly fast for a sports sedan, that is crowding supercar territory right there.

Imagine the shame for the driver of a brand new Audi R8 being out-dragged (for all appearances) by a family sedan.

The E63 S's exterior styling is certainly more aggressive than the standard E series it's based on, while there's intent about its looks, it doesn't shout too loud. You wouldn't call it beautiful but as a sports sedan; it looks the goods. It's all about subtlety, the aero aids fitted to the E63 S keeps it stable at speed, and there are enough vents and slots present to maintain adequate airflow to the drivetrain. The only real giveaway you're driving something over the regular series car are the overly large wheels and the rear spoiler. In a sense, it's a bit of a sleeper; cashed-up executives will love it, and AMG knows it.

The twin spoke wheels are works of art and as you'd imagine the footprint the E63 S put down means there's ample grip under all circumstances. The forged rims which can be made available in matte black are 20 inches for the E63 S. Running 265/35 ZR 20 rubber at the front and 295/30 ZR 20 rubber at the rear. 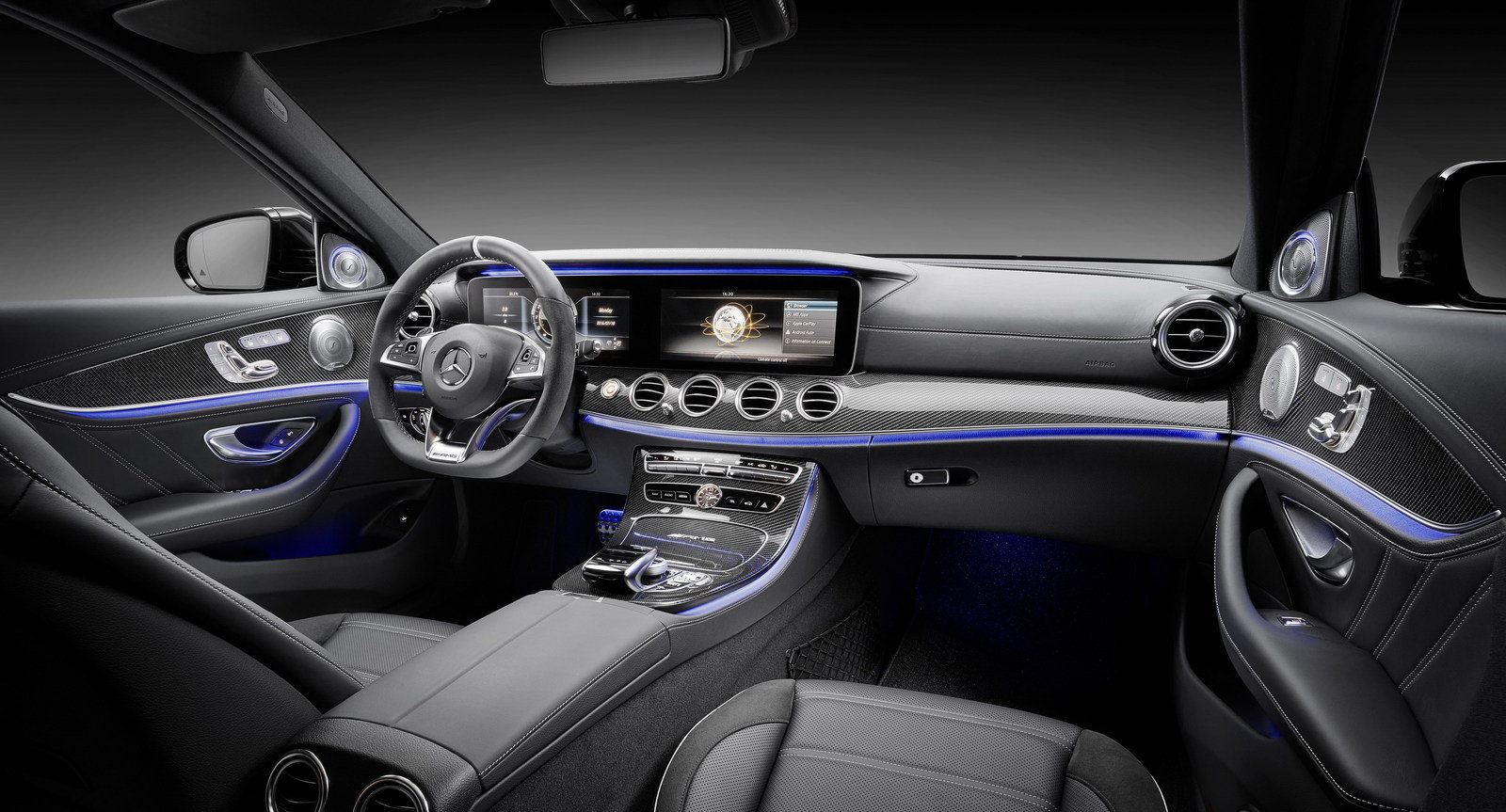 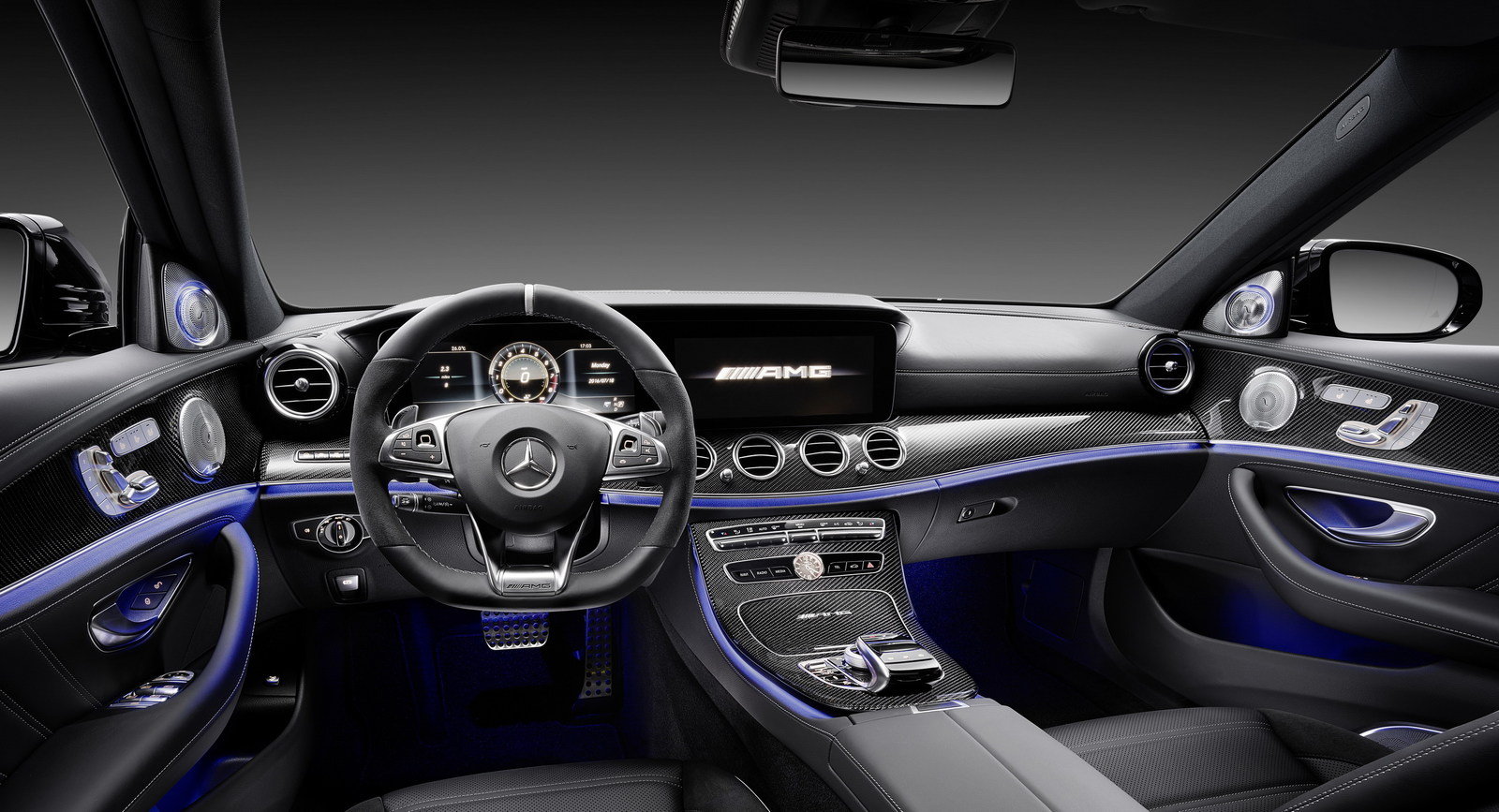 The interior is an evolution rather than revolution of the prior model and is an exercise in pure taste. The presentation is superb, you're cossetted in luxury, as expected from a luxo-express. Fit and finish are typically German and of the highest standard. For the E63 S there are lashings of carbon fibre and leather, the quilted bucket front seats are wonderfully supportive, and the D-shaped steering wheel is beautifully chunky and tactile. The biggest departure from the prior model is the dashboard infotainment display. The E63 S now sports a digital multifunction display, instead of traditional gauges, the display is crisp, the presentation, pleasing. However, the decision to plonk the layout in a tablet-like format rather than a binnacle has me wondering. It lines up with the infotainment display, which I think is the point, I'm not sure that I like it.

Further delving into the guts and bolts of Mercedes AMG E63 S and it becomes apparent just why the new belter is so damn good. It looks like the board at Mercedes AMG have decided to loosen their ties a little bit as the E63 S comes equipped with a drift mode. I'm not kidding drift mode! For a company that is noted for a more traditional approach to their performance offerings, it's a real first. What's a bet that Audi and BMW will soon follow suit? We'll talk more about the drift mode later.

The all new drivetrain based around the 4.0-litre W123 V8 engine is all-wheel drive only and features a 9-speed automatic transmission with wet clutch. While the prior model was available as both rear wheel and all wheel drive, the take up for the rear wheel drive model was deemed too small to warrant an appearance for the new sedan.

The standard air suspension for the E63 S is a new multi-link setup, with the front employing a four-link front axle design, using forged aluminium components with wishbones, strut rod and spring link. The rear multi-link system has been tied down to provide increased stiffness and enhanced wheel control. The AMG-tuned suspension has been set up to deliver superior dynamics and handling to an almost sports car like level.

Of course with so much performance on hand, you're going to want to know the E63 S stops as well as it goes, and the sports braking system doesn't fail to deliver. The standard setup comes with 15.4-inch cross-drilled and perforated brake rotors with six-piston brake callipers at the front. The rear employs 14.2 inch cross-drilled and perforated brake rotors with single-piston floating callipers. If you think the above is not enough and you see yourself doing the regular track day, you can elect carbon ceramic brakes with even larger 15.8-inch front rotors and 14.2-inch rotors to the rear.

The change from natural aspiration to turbocharging hasn't affected the soundtrack either, AMG's are famous for it, and while the new E63 S may not rev as high as the last model, the howl from the engine is every bit as impressive. Maybe even more so, it's deeper, angrier and with the underlying turbo whistles and whines, it's very intoxicating. Oh, and there's bark on the over-run, you want that, well you got it.

So what's the drive like then? As you can imagine, with so much performance on tap, you can't exploit the E63 S's dynamic limits on a public road, for two reasons. First, you'll burn your licence quicker than the time it takes to read this sentence, and second, if you're interested in self-preservation it's just not smart to do so. Does that mean it's not fun? It's bags of fun, despite weighing nearly two tonnes, the E63 S is almost as happy playing the sports car as it is the straight line drag weapon.

For regular road work, there are four main driving modes, "Comfort", "Sport", "Sport Plus", and "Individual Mode". Leave the car in Comfort mode, and it becomes a great mile eater, the ride while firmer than the standard E-class is perfectly acceptable, ride compliance is such that only larger road imperfections affect passenger comfort. Comfort mode also features cylinder deactivation, under light loads and consistent driving speeds it will act as a frugal V4, well relatively anyway. It's a relaxed stress-free experience and masks the beast that lurks beneath. Up the ante and things progressively get tauter, throttle response sharpens, gear changes become more responsive, the traction control and stability control systems loosen their reigns, by the time you've selected Sports Plus mode it becomes apparent the E63 S means business. "Individual Mode" allows you to mix and match the settings from of all three modes, want the soft ride settings but the most aggressive throttle response, it's all doable.

To put things in perspective; this E63 S is the most powerful E-class ever released and provided you're in the meat of the wide power-band, throttle response is instantaneous. Much of this is down to the twin scroll turbos fitted to each cylinder bank, which increases efficiency at lower engine speeds. Lag is evident in lower gears but only if you're below 2500rpm, and let's face it; when you're driving something this potent, that won't be too often. For the European version with the speed limiter disabled, the E63 S will see a top speed of 300km/h, where and when you'd be doing that is probably academic, but an impressive feat none the less.

If you want to take things further, there is "Race Mode", which is meant exclusively for track work and it's only in Race Mode that you can access the "Drift Mode" feature. Prior iterations of the AMG E-series were happy to shake their tail feather with little provocation, gobs of torque and rear wheel drive meant stepping the tail out was all too easy. Ostensibly, the Drift Mode completely disconnects drive to the front wheels, turning the E63 S into a tyre frying lunatic. In Race Mode, it's simply a matter of pulling the two paddle shifters toward you at the same time, to activate Drift Mode, it's of course great fun and adds to the theatrics but unless you plan to enter a Tokyo drift competition in your German uber bus, a bit childish. As my partner is only too happy to point out, I've never grown up, so I'm all for it. 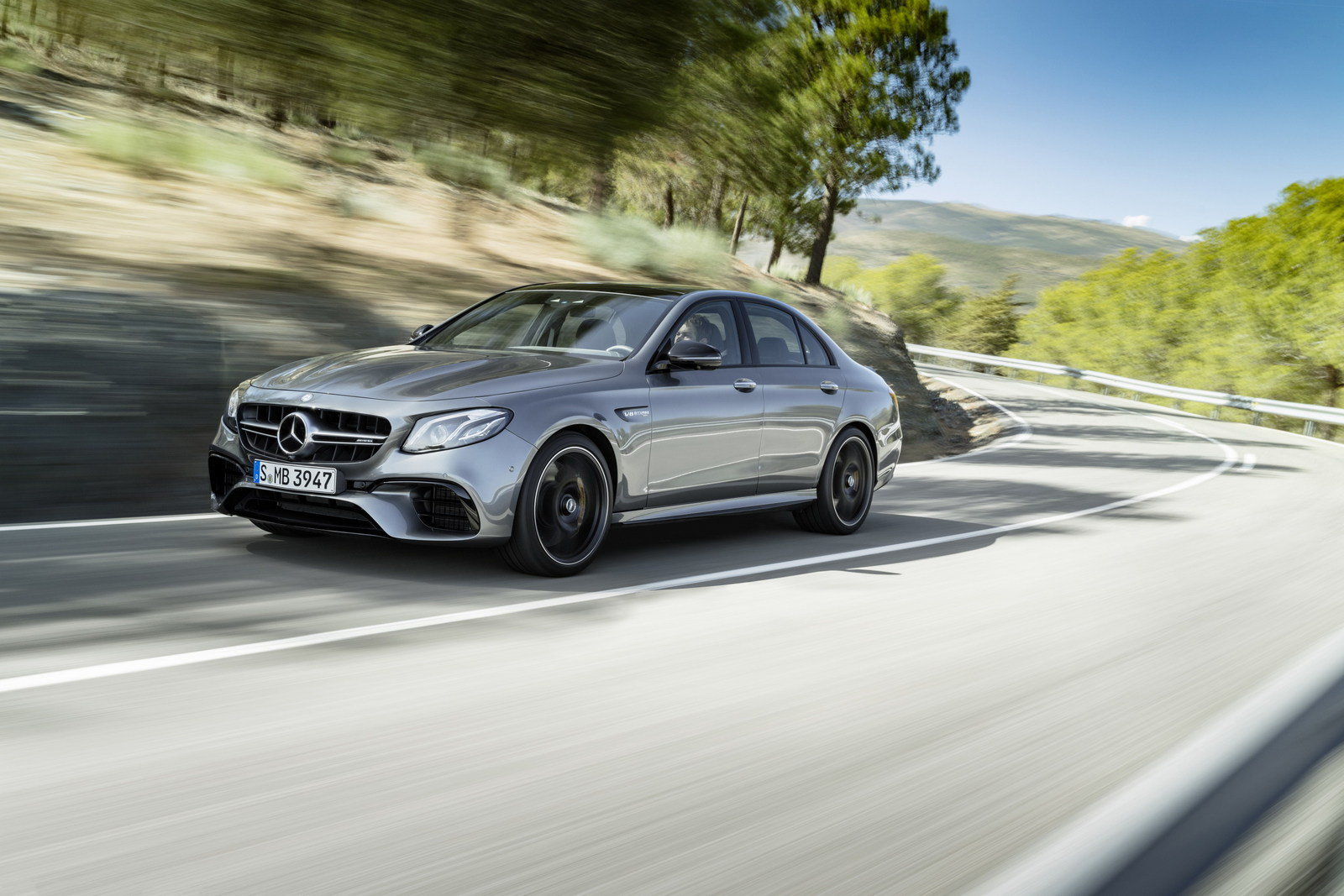 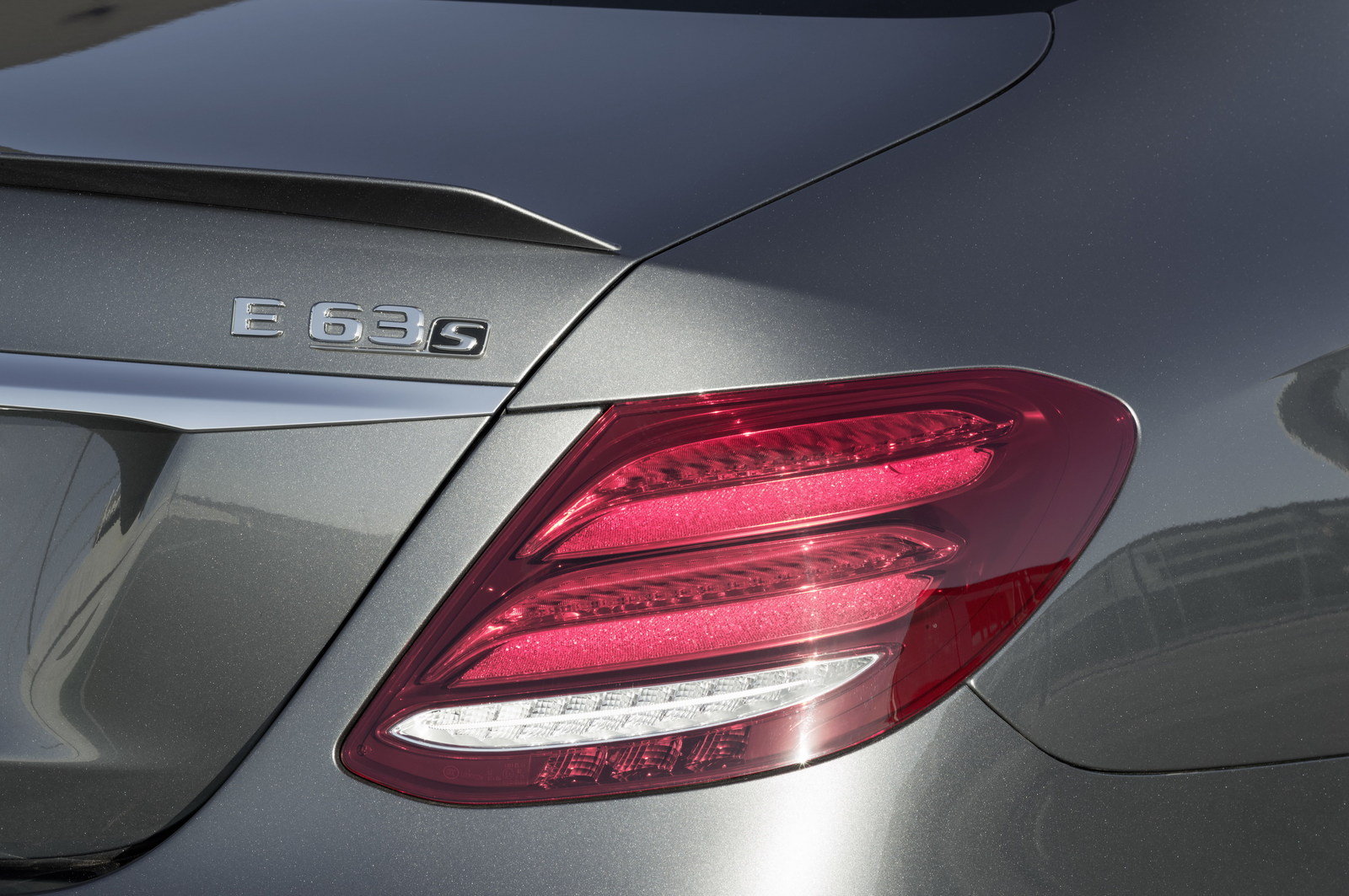 The E63 S points and turns remarkably well for a car of its heft, and feedback through the wheel is a highlight, but you can't defy the laws of physics, a racetrack is not its natural habitat, belting an E63 S around a track, however, is a sheer delight. Adjustability under throttle gives the E63 S an agility that far exceeds its two-tonne mass. The car has a rearward torque bias allowing that feeling of fluidity. It's only when you push harder that the torque vectoring system starts coming into play.

The all-wheel drive system must work under some black arts, as its ability to put the power down where and when needed is uncanny and allows exit speeds through corners which are ludicrous for such a large car. The torque split is not only actively controlled front to rear but to each wheel individually and while the car is operating as all-wheel drive, it's constantly monitoring how to make the most of the available traction.

It's proof of how technology can enhance driver satisfaction, the car being quicker point to point running all wheel drive rather than rear wheel drive as in drift mode; if you are drifting, you'll be having too much fun going sideways to care.

When all is said and done, the 2017 Mercedes AMG E63 S is an example of automotive engineering excellence. It's a multi-role fighter, as happy to act as a calm executive express, a super sedan, a sports car and drift warrior with equal aplomb. Until a rival topples it, the E63S is the world's finest petrol-powered sports saloon.