Not that long ago, zero to 100km/h under 4 seconds confirmed supercar status. Only the holy trinity of Porsche, Ferrari and Lamborghini used to offer such performance. For us mere mortals, such high performance wasn't generally available, until now. The latest generation Audi TT RS offers supercar performance, yet you could buy three of them for the cost of one traditional supercar, how's that for the march of progress? How ironic is it when it includes Audi's own supercar the R8.

I'm not trying to suggest the TT RS is in competition with the regular supercar crowd, but for the price, it's punching well and truly above its weight. If you want supercar thrills but don't have the dosh and don't want to chance a ten-year-old 911 turbo, the TT RS could be the answer.

Ok, it still hasn't quite escaped its 'designed for the hairdresser set' styling, but it is undoubtedly the best-looking TT to date.

It's expected to land in OZ mid-2017 for around $145,000 AUD. For your money you'll be getting a 2.5 litre inline turbocharged, intercooled 5-cylinder engine producing 394hp (294kW) @ 5850rpm. You'll also get a generous dollop of torque; 354 ft-lb (480Nm) available from a ridiculously low 1700rpm which doesn't tail off until you hit peak power, all-wheel drive and a sophisticated 7-speed dual clutch s-tronic transmission.

They're not huge power numbers by today's standards, but in a package weighing a trim 1440kg, you can see why the car puts up some serious pace. 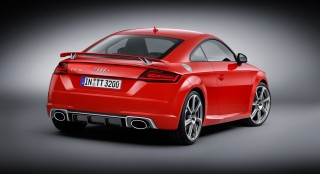 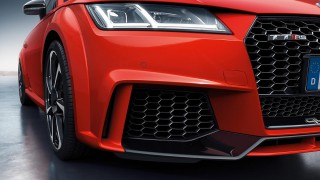 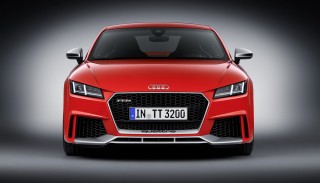 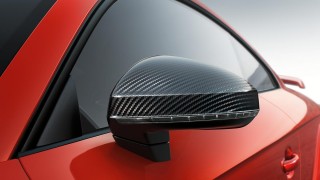 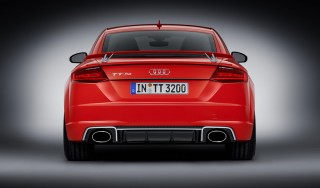 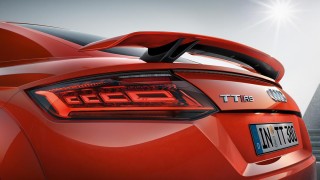 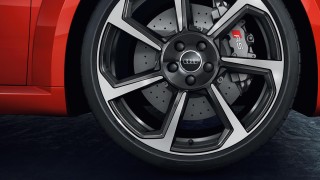 From the exterior, the RS distinguishes itself from the regular TT and TT-S by being much more aggressive. The front air dam and splitter/spoiler are significantly larger, as are the vents that aid airflow and cool the brakes, the side skirts and wheel arches add muscularity to the haunches as well as some additional width and it sits 10mm lower. The exhaust tips could double as gun barrels on a tank, and there's a large fixed rear wing. It looks like it's had a 'racer' aftermarket body kit fitted, but it adds to the car's presence, rather than detracting from it. It's the cleanest design in the current Audi range. A first for Audi is the use of OLED tail lamps, the advantages of which include, thinner/lighter packaging, more uniform/brighter lighting and the cool factor of animating the turn signals and braking lights. The TT RS is not shy, it announces itself loudly - the front splitter, rear diffuser and grille have a brushed anodised finish which is very effective. It contrasts pleasingly with the bold colours it's offered in. 'Quattro', is emblazoned in black on the front grille which signifies it as the, 'go stupid fast' model.

The interior doesn't work quite as well as the exterior. That's not to say it's not an ambient environment, there are some genuinely nice touches, like the Alcantara steering wheel which looks like it came from an R8. The 12.3" inch Audi virtual cockpit display is peerless, but for Audi, it's now mainstream, and if you've seen one virtual cockpit, you've seen them all.

The rest of the cabin displays Audi's usual attention to detail, fit and finish are to a very high standard, the surfaces and the controls are wonderfully tactile in both looks and feel. Packaging for the most part is good, but it is strictly a 2 + 2, the rear seats are virtually useless. I tend to wonder why they bothered. The front pews however, are worthy of the cars extremely high levels of performance. Still, it reminds me too much of the original TT from all those years ago. It could be intentional. Who should they be marketing to, Kylie, owner of 'Blood, Sweat & Shears' hair salon or the enthusiast driver? 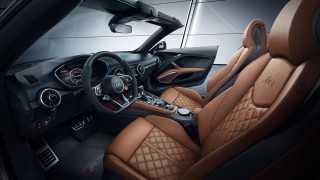 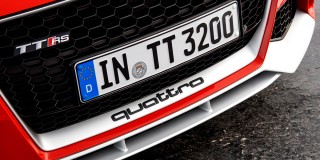 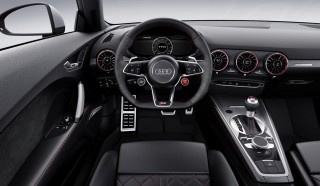 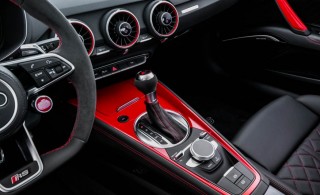 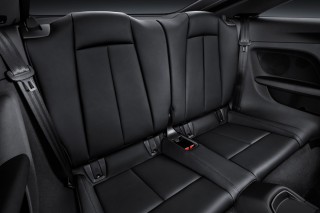 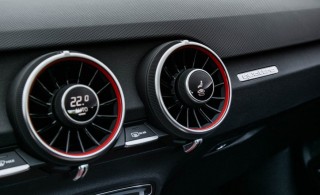 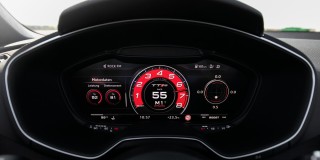 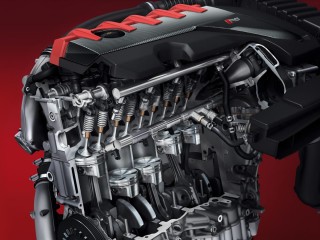 The TT RS is a hard car to pigeonhole; really, it stands on its own. It closest rival would have to be the Porsche Cayman 718 S. Still, the Cayman in a straight line is slower and more expensive. The TT RS may not have the handling finesse of the Cayman but unless you're a professional driver, point to point the pace between the two will be a bee's dangly bits - you're not going to notice the difference.

Yes, the Audi TT RS is aimed straight at the enthusiast, but being an enthusiast doesn't make you an expert driver. The Audi TT RS revels in its digital driver experience and journos alike are bagging its digital delivery. Another criticism is the steering, calling it wooden and lacking in feeling - "pfui", again - for the most part, you'll be having too much fun to care. If you can tell the difference between understeer and oversteer, then maybe it will matter to you but for most of us, it's pie in the sky stuff. The fact that the electronic aids will allow you to drive safer at speeds that would rival track work of a few years ago, is not a good thing - it's a hoot-inducing awesome thing.

I love video games and I love the TT RS. It's balls out crazy fast and accessible to the average driver. It's a win/win situation. One of the reasons it's so addictive is that the power is available everywhere and it comes on thick and fast. The TT RS may lack finesse but more than makeups for it with low down punch, with peak torque being available so low in the rev range that exit speeds on the twisty stuff will see you go from fast to illegal quicker than you can blink your eyes.

If you want the nitty gritty, the TT RS is nose heavy, the engine overhangs the front axle, with a 58:42 front-to-rear weight bias. At the limit it will push wide where understeer becomes evident. Even so, it is the best handling TT RS to date. A lot of that is due to the all-new all alloy motor and it's significantly 26kg's lighter than the old block. It points and shoots better than it has a right to and acceleration out of corners is neck-snappingly wild.

Other highlights? Using the launch control is a doddle; put the Audi in Dynamic mode, turn off the ESC (electronic stability control), pin the tacho to around 3,000rpm, left foot off the brake and you're away - no fuss, no drama. Vettel couldn't launch it better. 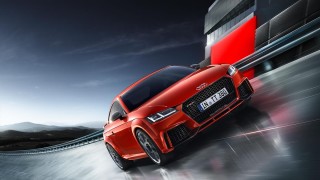 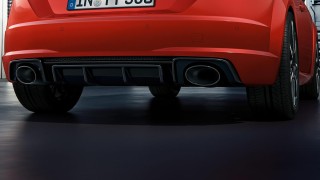 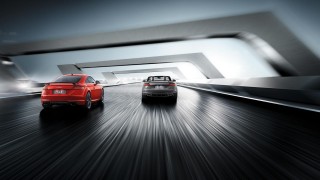 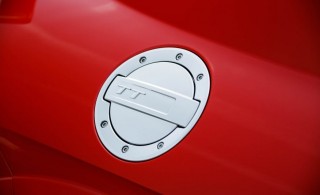 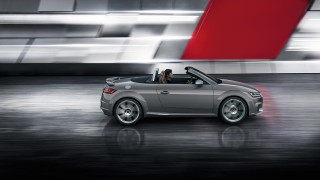 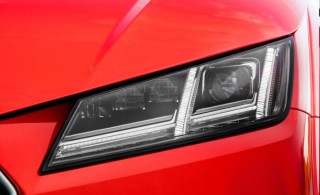 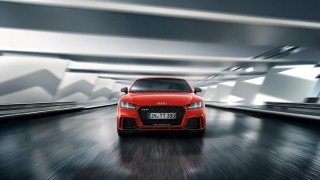 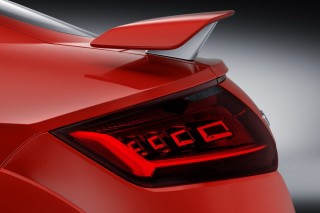 ​As a daily driver, it's a better compromise than a Cayman. Dial the Comfort drive mode and it's a relaxed and comfortable driving proposition.

The sound is all-important for a car like the TT RS. If you option it, the sports exhaust is like a Valkyrie blowing a war horn, it hits you right in the guts and by god, it's good. And it doesn't stop there, it barks, spits, belches and farts on the over-run, like a demented Tasmanian devil, it's so in keeping with the character of the car.

The Brakes? Well, they work very well. At full shove, they'll knock the air out of your lungs repeatedly with little brake fade. And that's just the standard steel rotors. If that's not enough for you, you can opt for carbon ceramic brakes.

I nearly forgot to mention the 7-speed dual clutch s-tronic transmission. For those of you lamenting the traditional manual, get over it. It's vastly superior to a traditional 3 pedal setup. Audi's dual-clutch transmission is well and truly sorted and in full manual mode, no manual transmission will better it. In full auto mode under hard driving conditions, it can become confused and doesn't always select the gear you want but for relaxed city driving it is very close to perfect.

To sum up, it may not be as involving as the Porsche Cayman, or even a BMW M4 for that matter but it is a hero package none the less. It's more car than you could want or ever need on a public road. It makes for the great argument that just because a car is overtly digital doesn't mean it is a bad car. In this case, it makes it a great car.