We test drive the 2017 Holden Trailblazer You may remember recently we tested the 2017 Holden Colorado, we gave it a big thumbs up. Praising it for its car-like qualities and its stellar drivetrain, a lack of market awareness and the fact there's some very tough competition, means it's not setting the sales world on fire. I'd like to say the new 2017 Holden Trailblazer seven seater had us feeling the same way but it didn't.

Not that there's anything wrong with it, on the contrary, the Trailblazer is a competent off-roader that possesses the same qualities as the Colorado, which is not surprising as in essence it's the closed cabin version of the same vehicle. I guess what had me miffed is the Holden marketing gurus are trying to push the Trailblazer as an SUV. Clearly, it isn't, this leaves it with an identity crisis which the punter in the market for a new SUV might not be able to reconcile. It's a real shame because the Trailblazer for what it is, is a solid proposition, and used for what it's built for is a rewarding vehicle.

If you're in the market for an SUV and you took the Trailblazer for a test drive, you might be inclined to think it's rubbish but you'd be wrong. A Mazda CX-9 the Trailblazer is not, however, the CX-9 couldn't tackle what the Trailblazer does with ease and remain in one piece. That's why getting the marketing right is so important, Holden needs to drop the SUV pitch, and when you understand it's direct competition is more akin to cars like the Mitsubishi Pajero it becomes much more viable. In one sense it stands on its own, there's not that many genuine seven-seat off-roaders in its price bracket.

The Colorado 7, which the Trailblazer replaces, was criticised heavily for being too truck like, a lot of development has been undertaken to refine the Trailblazer and for the most part, that has been successful. 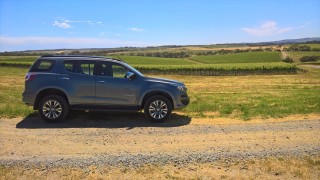 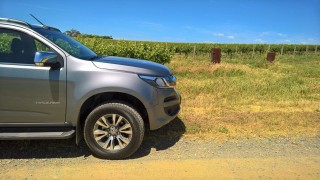 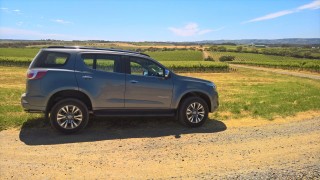 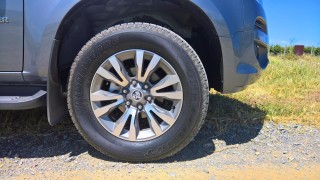 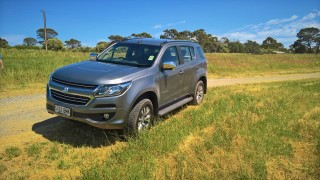 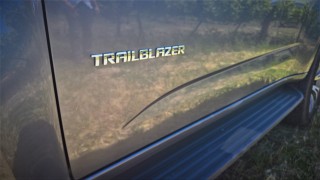 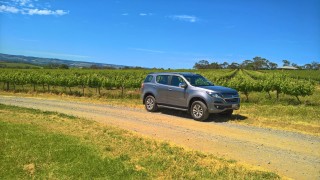 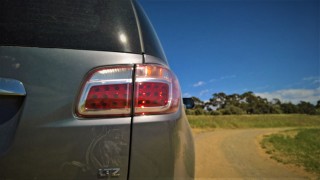 First impressions? It's much like the Colorado it's based on, which is no surprise. It has the same overall stance, the addition of the fully enclosed cabin hasn't marred its lines or proportions. It's aggressive looks, ample ground clearance, and suspension travel that would suit a Dakar Rally participant mean it's no off-road pretender but in fact the real deal. Herein lays the major issue with the Trailblazer - buyers are going to dismiss it outright for not being the SUV it's touted as. Most SUV people are not going to care about the Trailblazers true off road capability, but for those who do, here is a real alternative to the established stalwarts.

A friend joined me for the test, his initial reaction to the Trailblazer went like this, "Mate, it's too loud, it's boring. It's just not that special, you expect at least this from all cars nowadays, it's not fast enough. It makes me want to yawn." Believe it or not, that is a testament to how far the Trailblazer has moved on from the Colorado 7. Not once did my travel companion complain about it being too much like a truck.

I pointed out the Trailblazer is based on a light truck, this had him taken aback a bit. It's not quite as stable as the Colorado, the rear cabin would account for that but dynamically the difference is minimal. I decided it was time to see how the Trailblazer handled unsealed surfaces, so we gave it a bit of a flogging through some rough dirt roads typical of rural Australia. Lo and behold the Trailblazers composure and driveability remained virtually the same as driving on the tarmac, wow! We then tackled some off roading, and again, it was surprising just how confidence inspiring the Trailblazer was, at no point did I feel like it wasn't up to the job. Switching between rear wheel and all wheel drive couldn't be easier, with a rotary dial mounted on the centre console, it's just a matter of selecting one of three modes available; rear wheels only, all wheel drive hi-range and all wheel drive lo-range. Better yet, the modes can be activated on the move, provided you aren't exceeding the rated speed for the all wheel drive modes. There's no rear differential lock, which may put off the hardcore all terrain enthusiasts but unless you intend to be mountain climbing with your Trailblazer you should be ok.

For the return trip on the tarmac, we pushed the dynamics of the Trailblazer to the point that the safety features of the vehicle would kick in, reigning in any and all exuberance, so having a case of the 'stupids' shouldn't kill you. It works remarkably well, maybe a little too well, hence my companions, "it's boring" comment. We then turned off all driver aids, (yes you can do it, and no, it doesn't just simply turn off the traction control) it proved the Trailblazer is more than up to breaking out some shenanigans. Not so boring after all.

All of this had me realise why my mate initially poo-pooed the Trailblazer. Your natural gut reaction is to compare it to a typical SUV, a fair call, based on its overall appearance. However, if you have the opportunity to use the Trailblazer as intended, you soon realise it's so much more. Sure it's not as car-like or driver friendly as a regular SUV but it's more than acceptable as a daily driver and when you do want to do some serious adventuring, rest assured the Trailblazer can handle it. If we're talking outright straight line performance, the Trailblazer will smash many a soft road diesel, the Subaru Forrester for one. Rolling acceleration is amazing for its class, the praise we heaped on the Colorado drivetrain is echoed for the Trailblazer, after all, it uses the same engine and transmission. 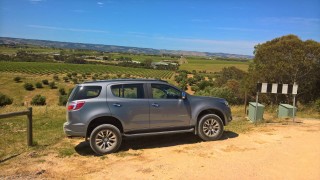 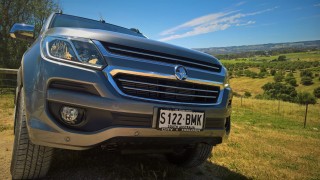 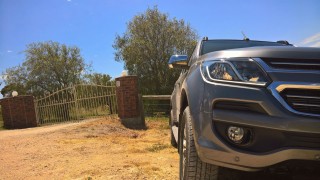 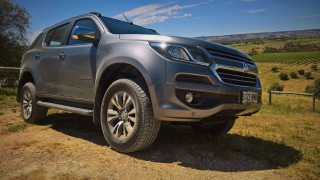 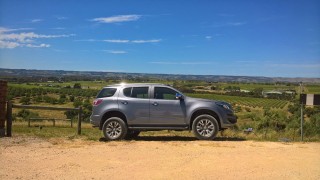 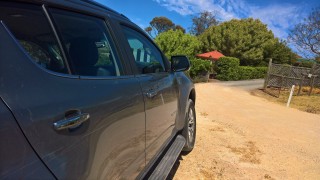 The trailblazer is exceptionally easy to manage, despite it's size, your Nan could drive it. From that point of view, it masks its truck origins quite well, it's a little loud in the cabin, compared to the competition, but it's not a deal breaker. A lot of work has gone into refining the six speed auto transmissions operation, and it's paid dividends, gear changes are very smooth, power deliver is seamless, harsh vibrations through the driveline have virtually been emliminated, (an issue for the Colorado 7).It's obvious the Holden engineers have made the Trailblazer a much better drive. They've also done a good job of ride compliance, considering it's fitted with off-road suspension, it still feels somewhat floaty, but with the Trailblazers high centre of gravity and the amount of suspension travel they've managed a good compromise between off roadability and ride quality.

To add to driver confidence is a raft of driver aids, the ESC fitted is quite sophisticated for example. It monitors steering input, lateral motion, traction per wheel and will apply braking (per wheel if necessary) and adjust power when it sees the need. Other standard safety features present include forward collision alert with head up warning, lane departure warning, park assist, rear view camera, tyre pressure monitoring, hill descent assist and seven air bags.

It's a comprehensive list, and all the systems present work seamlessly. I especially like the reversing camera, I've seen it fitted to other Holden models, not only does it show the expected guidelines, but they change direction according to your steering input, it gives you a clear idea of where you'll end up, rather nifty. Cabin presentation, fit and finish, and driver ergonomics are a much improved over the Colorado 7. For the most part, the cabin plastics, controls, buttons and switches used have a chunky feel to them, they look good and are pleasant to use.

The front seats are very comfortable, and promote fatigue free driving over long distances, you sit on them rather than in them, the middle pews are also well sorted, there is ample knee, shoulder and headroom, the bench is lounge like in its accommodation. The foldout rear seats are a little cramped. Ideally, they are suited for big kids or smaller, technically, you can seat an adult, but anything more than a short trip is going to leave you with unhappy customers. A disadvantage to the rear foldout seats, when they are in use, it compromises rear storage space (leaving you with just 235litres), this may impact your adventuring. Accessing the rear compartment is painful, to say the least. The tailgate on the Trailblazer is manually operated, and it's heavy, all the competition are using powered options. Holden needs to pick up their game on this and at least offer a powered tailgate as an option.

On the connectivity front, the Trailblazer doesn't disappoint, fitted with either a 7.0"inch (LT) or 8.0" inch (LTZ) touchscreen infotainment system, with inbuilt SAT NAV and Bluetooth. Using the latest adaptation of Holden MyLink, it's a great system that is responsive and easy to use. Setting up your smartphone is a doddle, and there is support for both Apple CarPlay and Android Auto. The dash layout is a direct carry over from the recently updated Colorado using four main gauges; fuel, temperature, speedometer and tachometer. The gauges are easy to read while not being particularly exciting, there's an additional digital display between the tachometer and speedometer which can be set to show various info like real-time fuel consumption, average speed and trip distance. I left set showing the digital speedometer which I liked. The steering wheel fitted to the Trailblazer is typical Holden fare. It's serviceable and feels good to the hands. Various car functions are available direct from the wheel and include Bluetooth with voice activation, stereo volume, station/song next/previous select and cruise control. The wheel mounted controls are intuitive and straightforward to use. When first taking to the road, the steering wheel seems too large, once you have travelled some distance and encounter varied conditions, you realise it's just the right size for this class of vehicle.

Overall the new 2017 Trailblazer is a competent package that has addressed most of the criticism directed at the model it replaces. It's now a viable alternative to the regular off-roader crowd. It scores highly on usability and durability if Holden can get their marketing right we should see more Trailblazers on the road.

Thanks again to Robert & Luis  who provided the Trailblazer LTZ for testing. If you are in the market for a Trailblazer, go see the boys at City Holden, you'll be looked after. 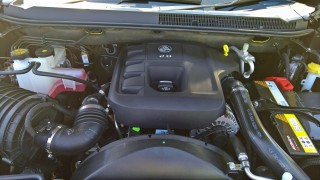 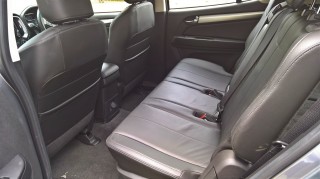 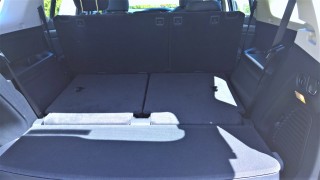 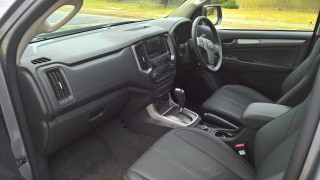 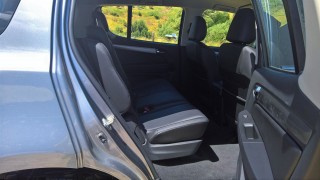 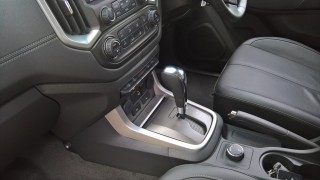 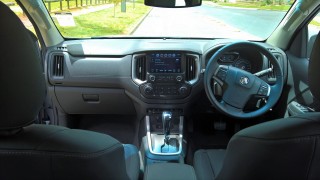 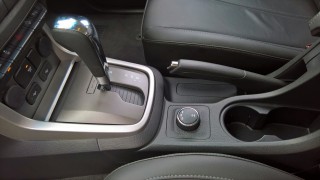