The French aren't just about breadsticks and wine - they're pretty good with cheese too and some would say cars as well. When it comes to hot hatches the VW Golf GTI, Audi S3 or Ford Focus ST are a dime in a dozen. Everybody knows somebody who has one. So how do you stand out from the crowd when your choices are limited? Easy, go all out, go French - your friends will think, now that's a hip cat who knows their fashion as well as their cars.

A 2009-2012 Renault Megane R.S. Coupe is truly unique - French through and through, from its offbeat styling, (take those kooky alloys for example) to cabin ergonomics that makes sense to no-one but the French, in a word... quirky. On the looks front the Megane R.S. Coupe makes everything else look positively tame in comparison.

It's not just about looks, either - these rebel rousers once held the Nurburgring hot hatch crown (Megane RS 265 Trophy).

Featuring a turbocharged 2.0litre inline four cylinder engine with inter-cooler, the last of the III series developed as much as 195kW @ 5500rpm and 360Nm of torque at 3000rpm. Fitted with a six-speed manual transmission and capable of hitting 100km/h from standstill in just 6.0 seconds flat. The Megane R.S. is famous for its involving drive. 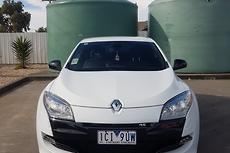 US CAR SALES - they weren't available, your only option is to import one.