People in cars. We talk the rides of our readers, enthusiasts
and locals. Taking a look at great cars from their owner's
perspective. If you'd like to show us your drive, get in touch. For Garrie Hisco, classic cars are a lifestyle, a passion that started way back when he was just twelve years old. Garrie has fond memories of the early sixties and Friday nights with the family heading out to Roley Park Speedway, inhaling the heady fragrance of Castrol racing fuel and chowing down on Chiko Rolls, watching gladiators in their steel chariots racing to victory.

Garrie was witnessing Aussie stock car racing, as raw as it gets and it left a profound impression that was to influence a lifelong involvement with classic cars.

Garrie has a background in Industrial Design which saw him with a successful career as a lecturer. He attributes his career choice to his love of cars, seeing them as a reference point for design.

Adelaide born and bred, Garrie is a colourful character, with a thick shock of white hair that most men his age would envy - "borrowed from Bob Hawke", he says. 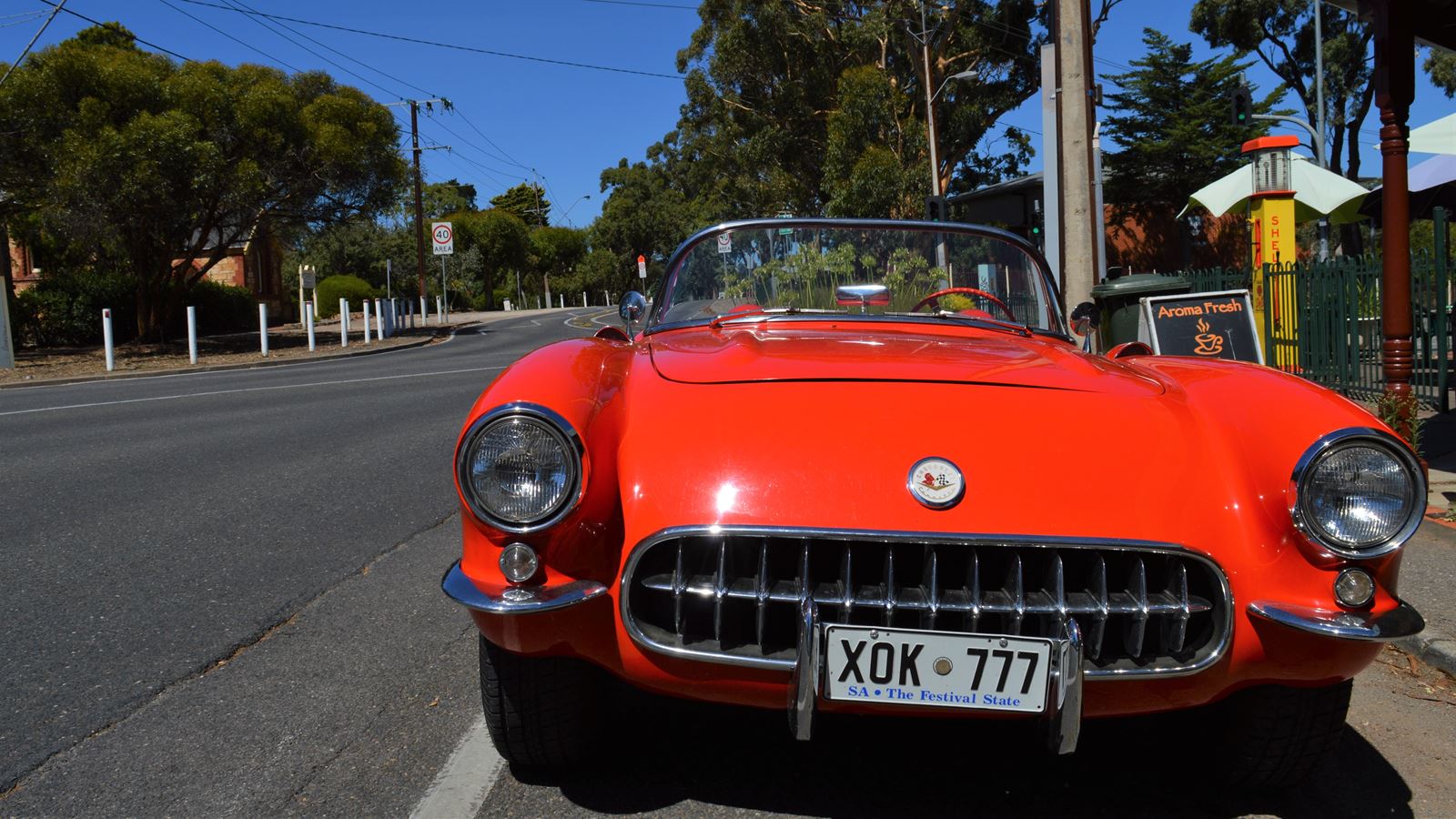 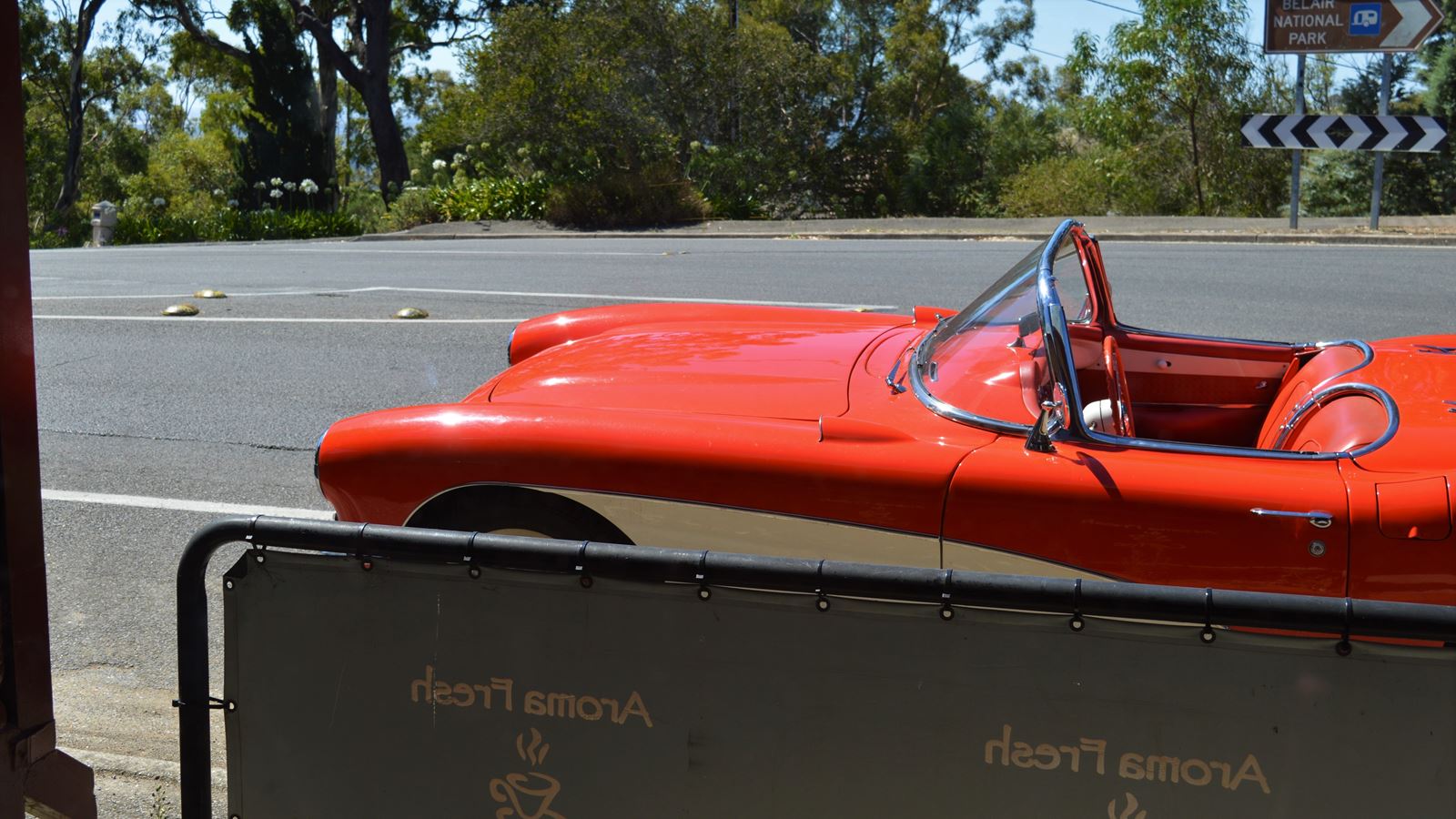 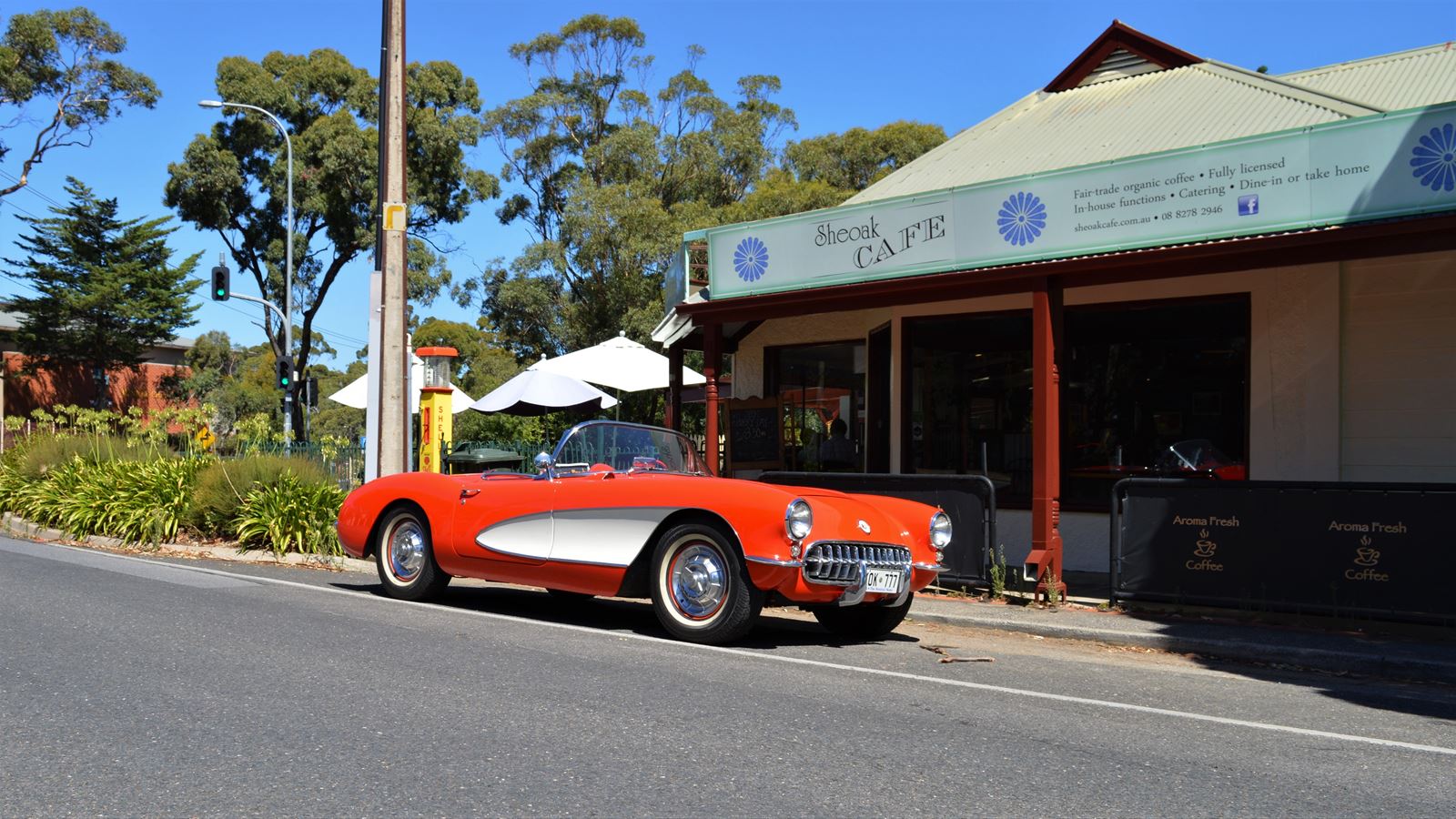 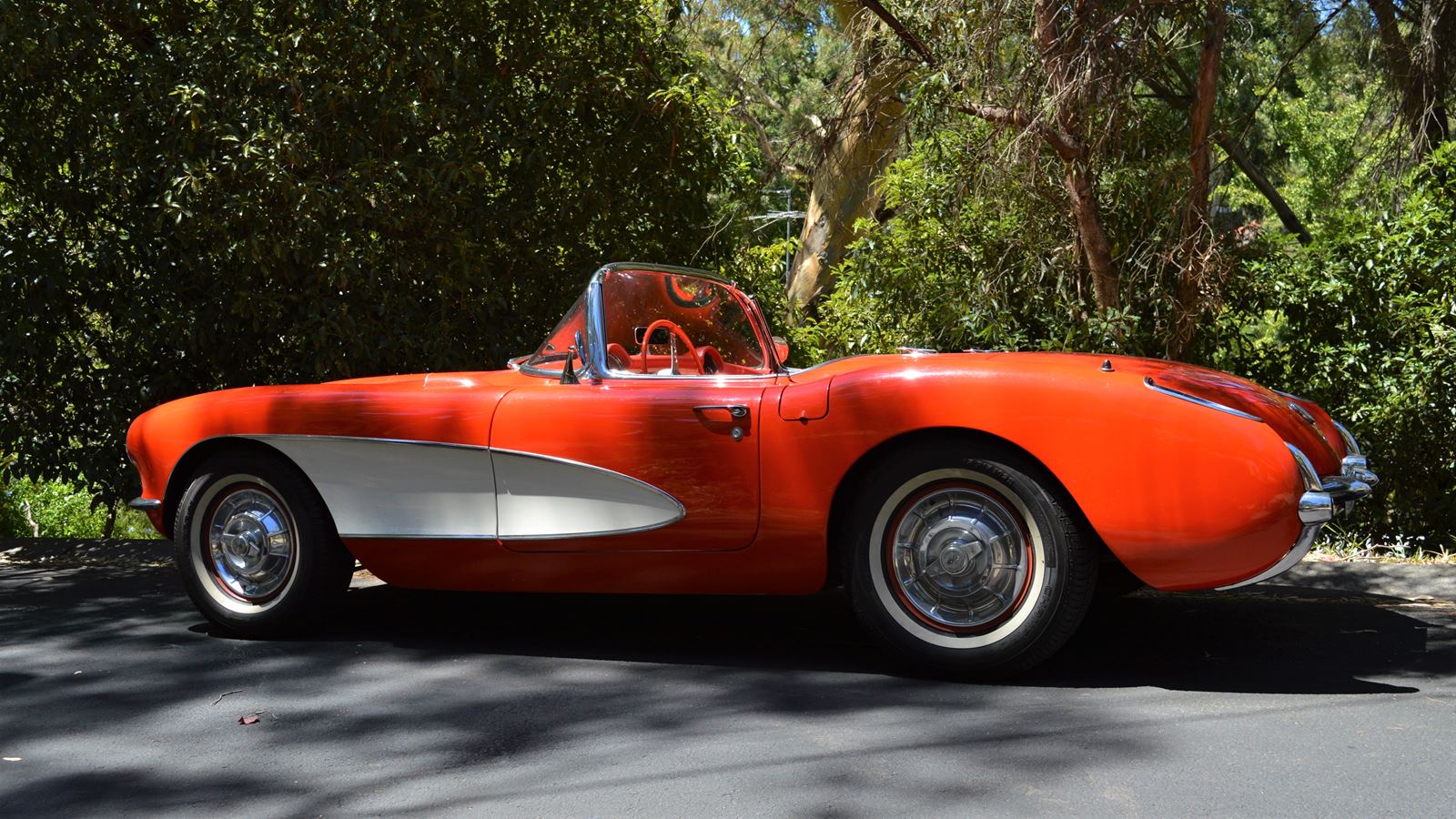 Garrie has been restoring and collecting Classic Cars for more than fifty years. His stable currently consists of twelve unique cars and much like Garrie himself, they are an eclectic bunch. An immaculate TA22 Celica, a Mercedes 450 SL hardtop convertible, a 1924 Mercedes Targa Florio and the 1957 C1 Corvette just to name a few.

The 1957 C1 Corvette convertible typifies Garrie's love of cars and is his pride and joy. "To drive an early Corvette, is one of life rewards", Garrie enthuses.

You only need to take one look at this rare American beauty to know that's true. It recalls a simpler time, Rock and Roll was new, Elvis was riding his fame, America was bursting with optimism and life seemed more innocent.

The C1 Corvette was supposed to be the answer to the European upstarts like the Jaguar XK150, Austin-Healey 100 and Mercedes-Benz 190 SL, all convertibles which proved hugely popular with the Americans.

The C1 Corvette was first displayed as a concept in 1953 at the General Motors Motorama at the Waldorf-Astoria in New York City on January 17, 1953. It caused such a sensation it was rushed into production just six months later.

The 1956-57 model was the second iteration of the C1 platform, and it showed that Chevrolet was serious about competing with their European counterparts. It featured an all new fibreglass body designed by Harley Earl, widely regarded as one of his finest works and the prettiest of all Corvettes. 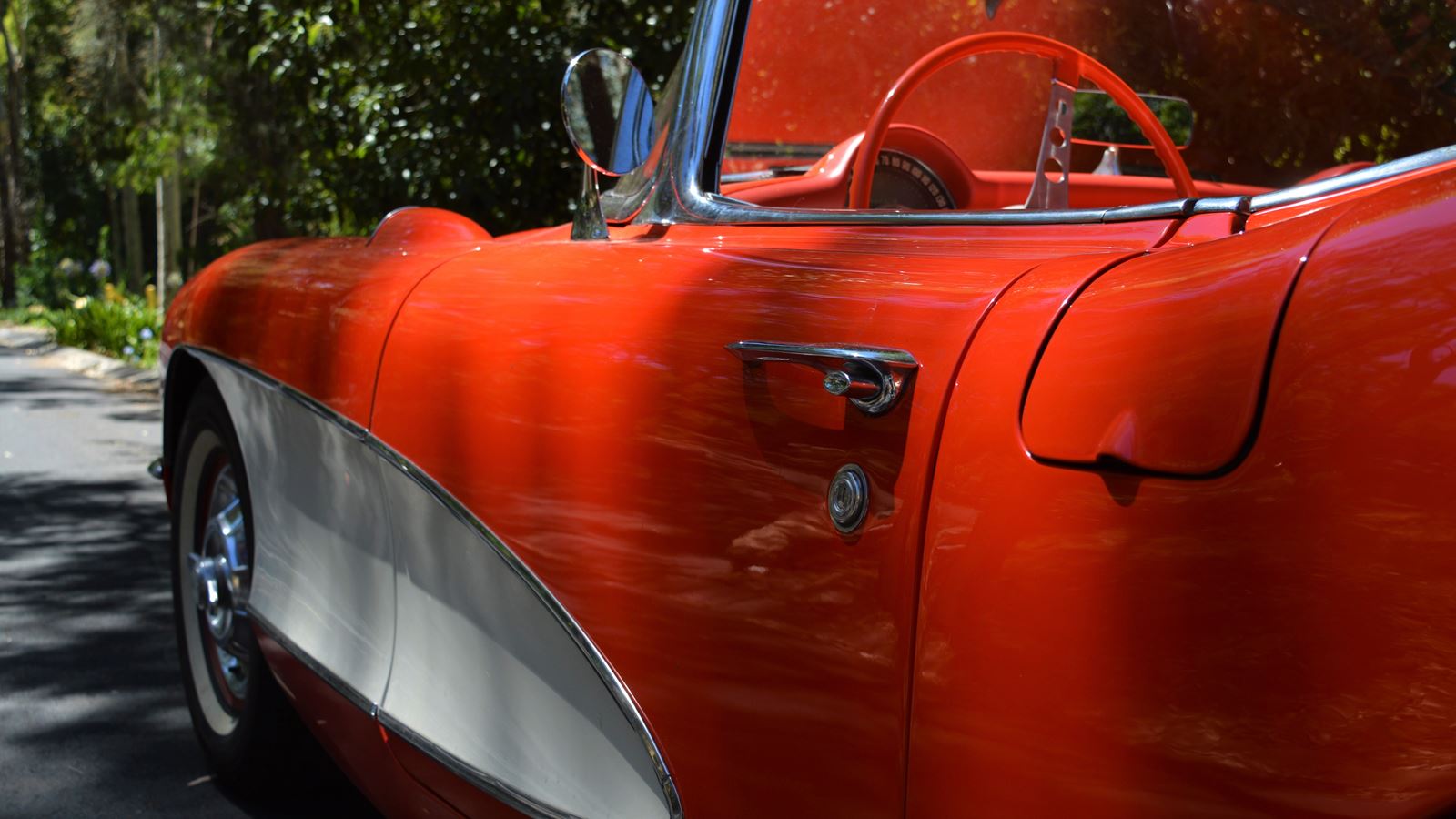 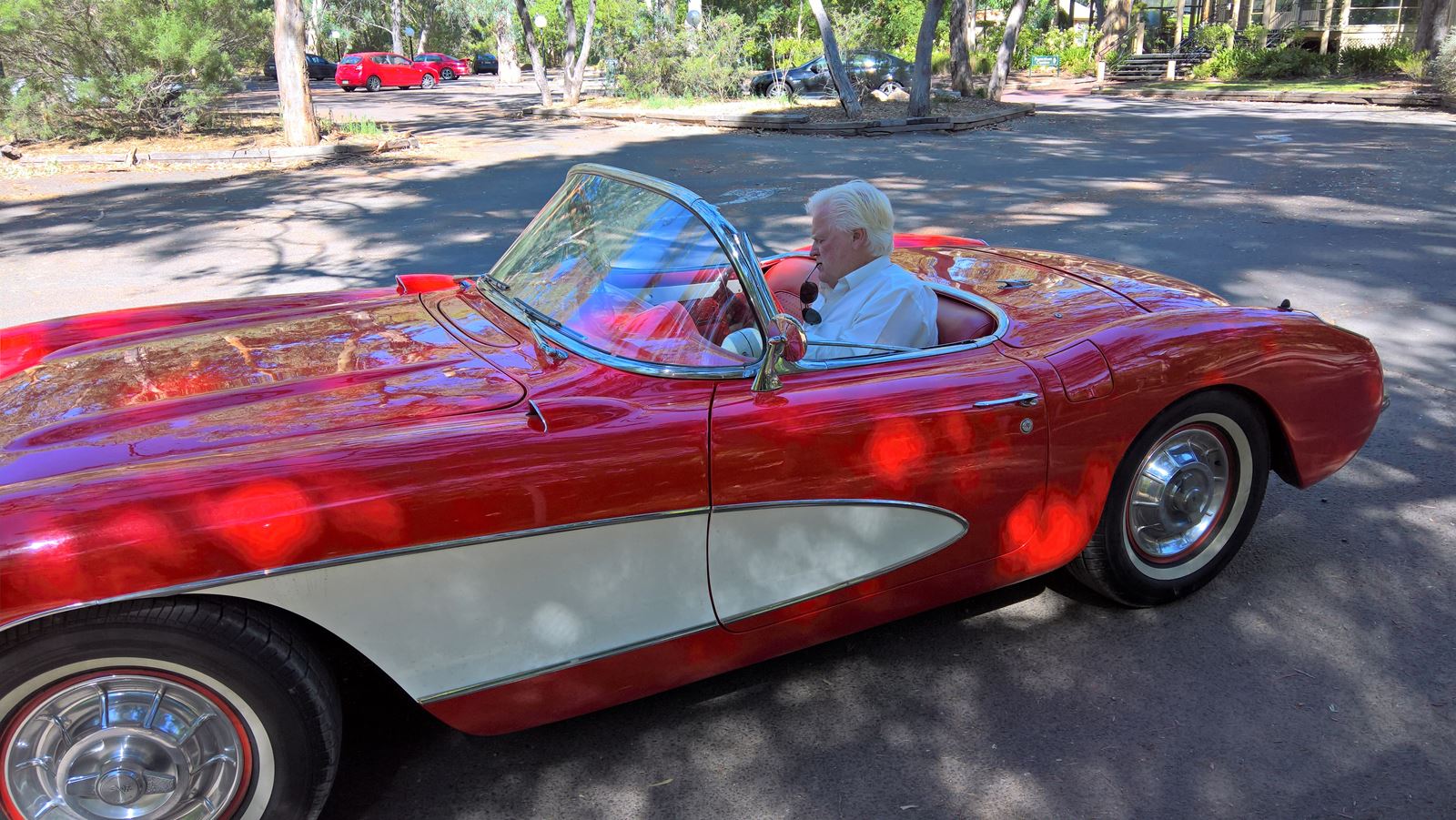 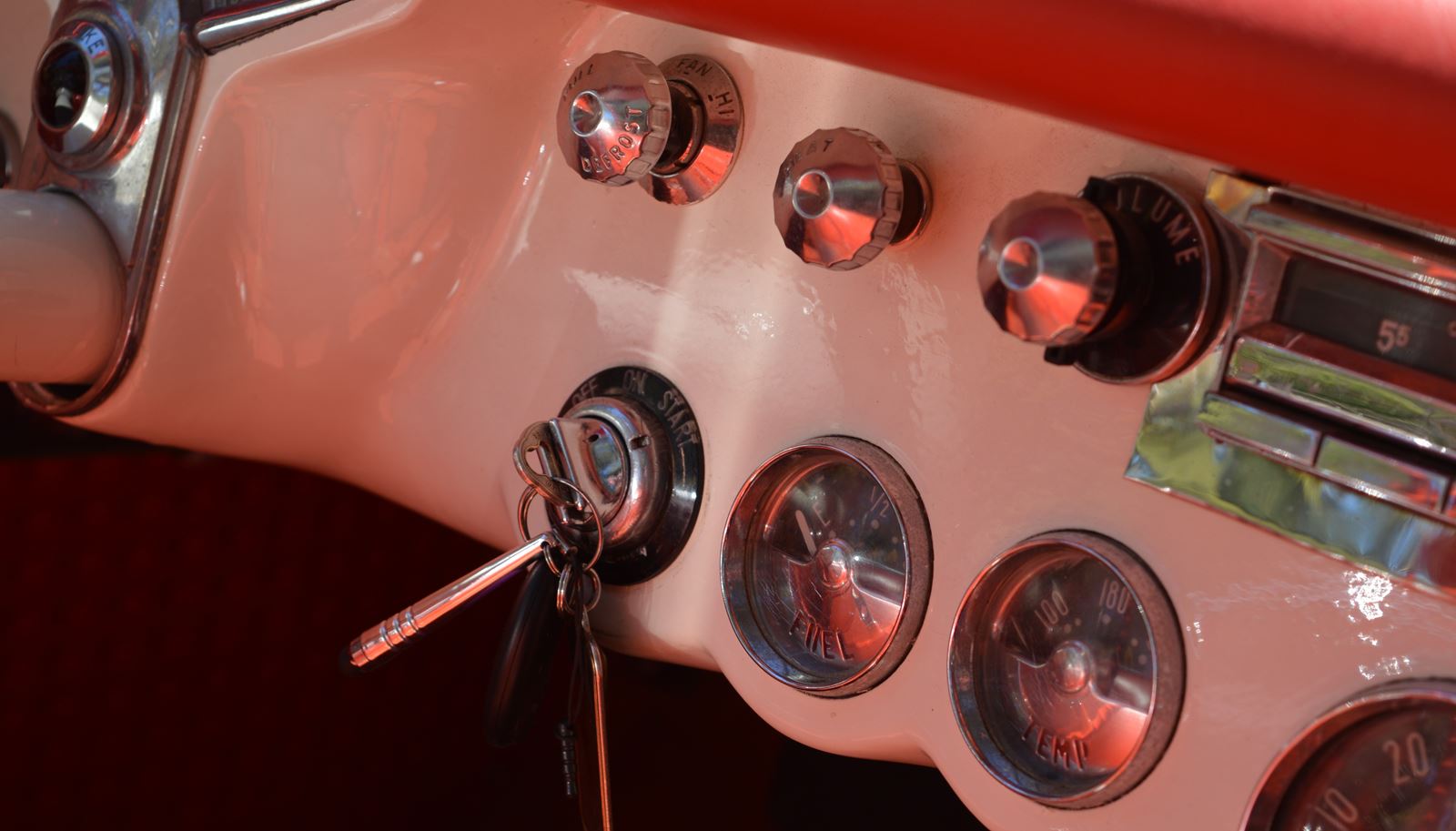 The design is simple; its flowing lines are blended artfully front to rear, in an era before wind tunnels and aerodynamics - the car looks shaped by the wind. I ask Garrie, "Where are the exhaust pipes?", as I couldn't see them? He showed me they exit through the rear bumper; so well is it executed I hadn't noticed it... and it's oh so cool.

The 57 C1 Corvette is easily the equal of anything the Europeans had style-wise at the time, with the chrome embellishments adding to its appeal. The car's interior echoes its exterior; it's lines a delight to behold.

Garrie's unmolested Corvette came into his possession pretty much as you see, it's an original car with original mechanicals, making it a rarity indeed. It features a peppy 283 cubic inch (4.6L) V8 engine, conservatively rated at 283bhp with a 2-speed Powerglide automatic transmission which aptly describes the car's spirited performance - you notice this yourself in the car, gliding along powerfully.

Riding along with Garrie you get caught up in the experience with the sound of the sonorous V8 burbling as it wafts along serenely down the road. It drives and handles much better than you expect, the ride is very plush.

It so captures a moment in time; you hear the Rock and Roll playing in your head, you feel like you should be wearing a leather jacket and have slicked back hair to do the car justice.

Garrie sums up the experience of driving the Corvette perfectly, "When I'm in it, I think every night is Saturday night." 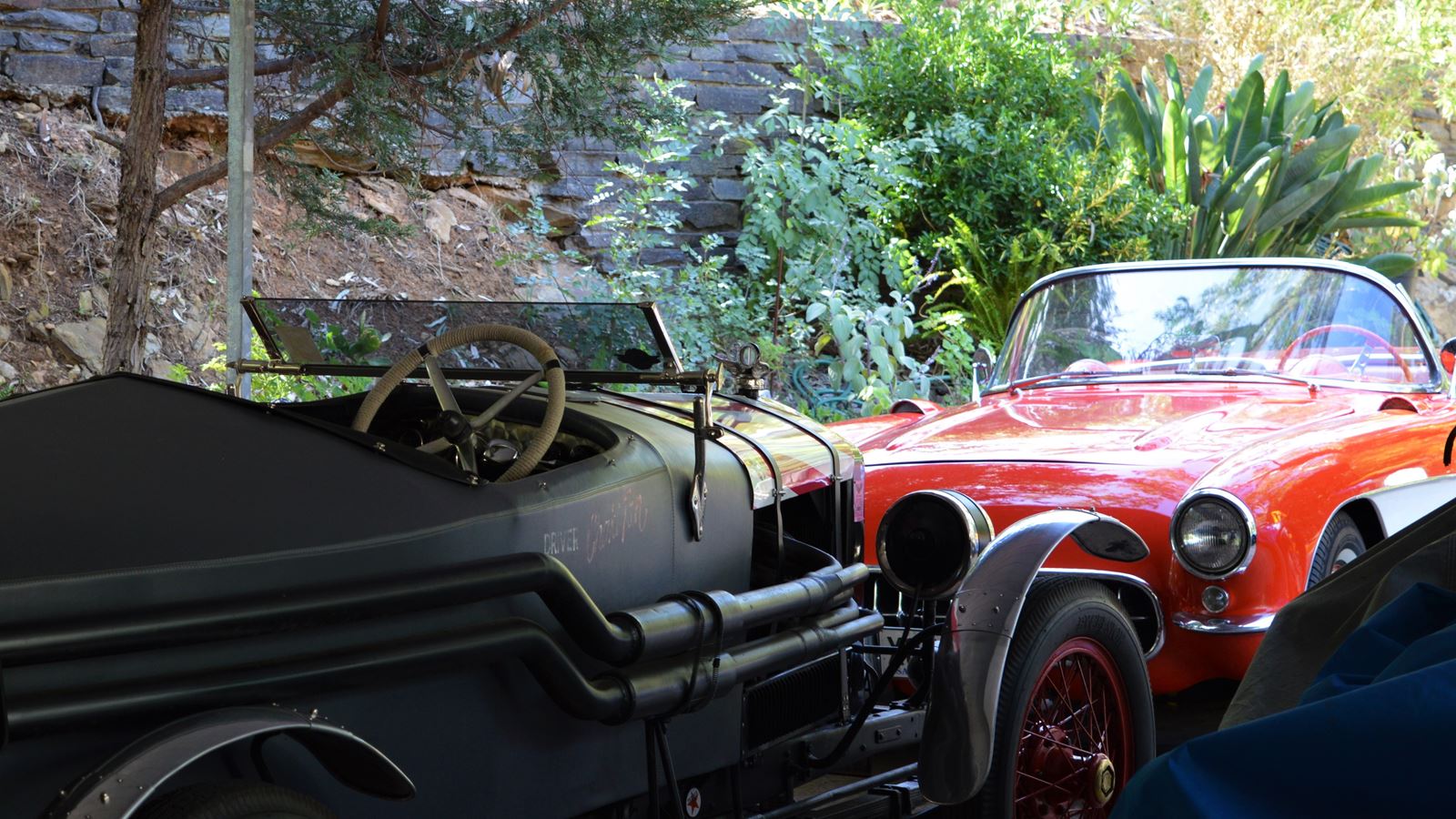 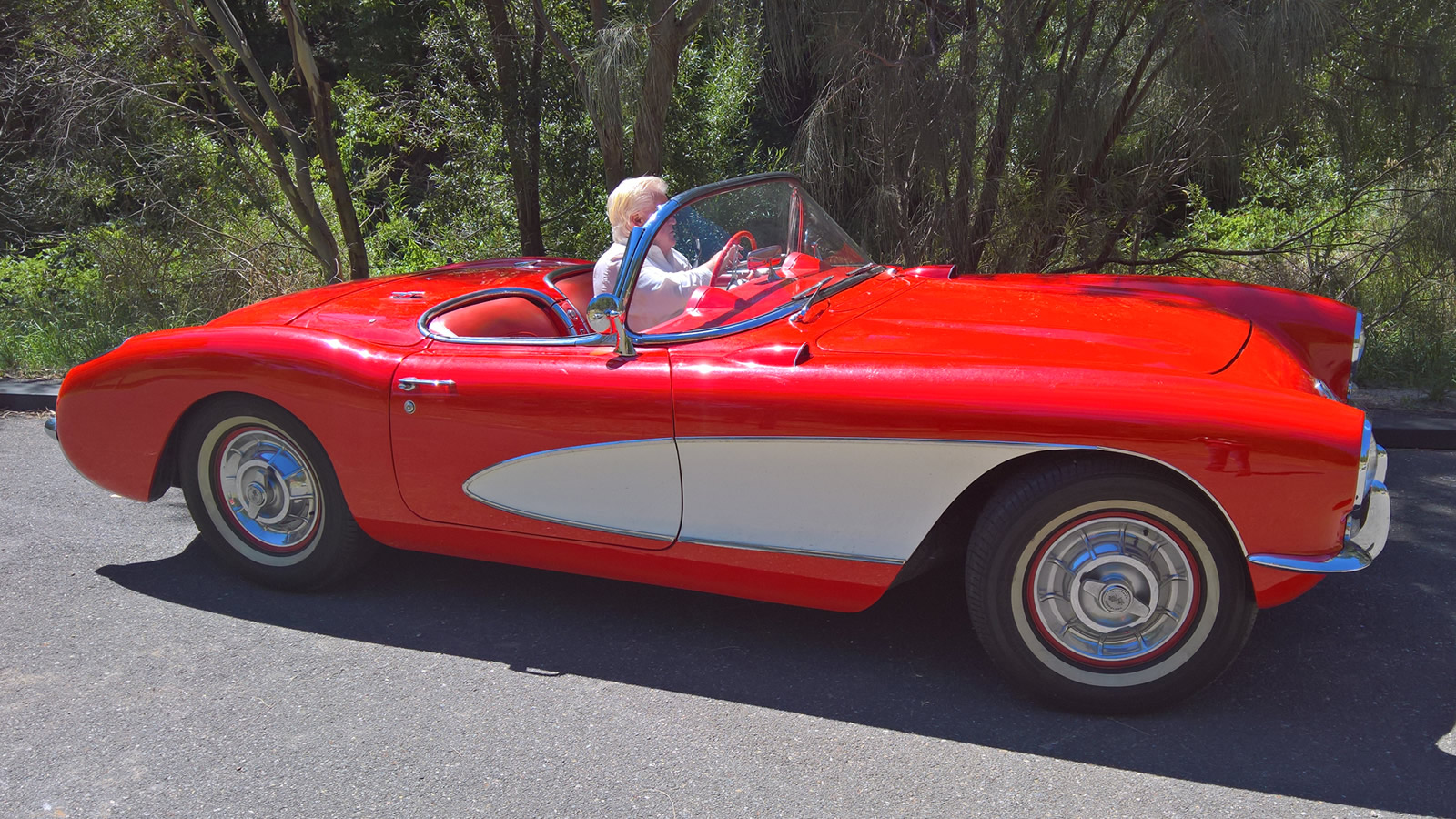 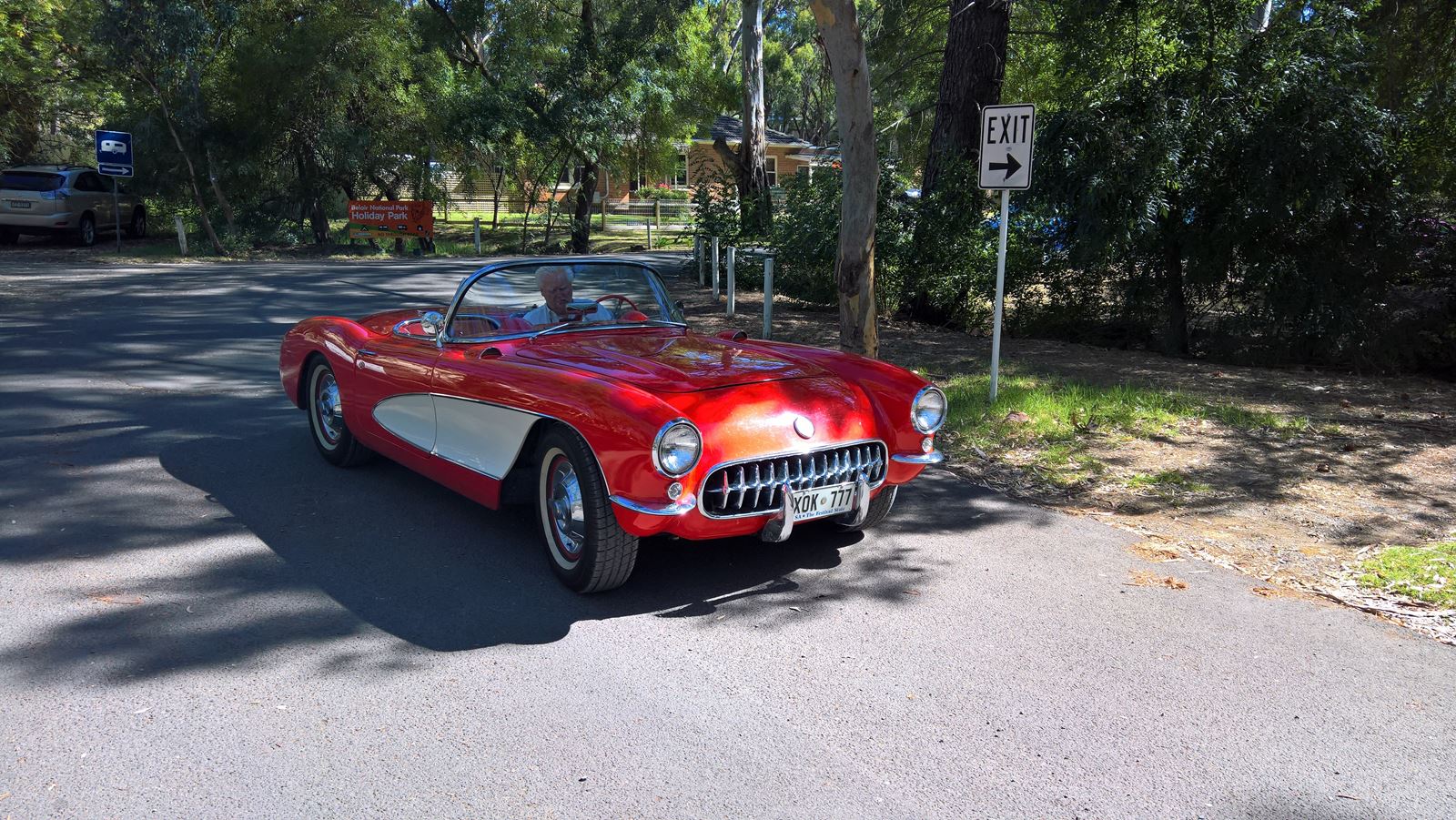